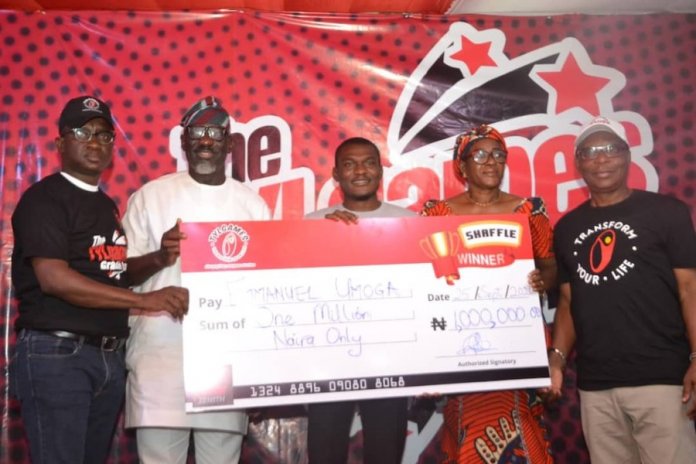 A Lagos-based entrepreneur, Emmanuel Umoga, has emerged the first N1 million grand prize winner at the inaugural draw and cheque presentation ceremony of the lottery platform, TYLgames in Lagos.

The TYLgames grand launch and cheque presentation that took place in Lagos recently, saw another 29 gamers being presented with their winning cheques ranging from N10, 000 to N500, 000.

TYLgames, a gaming (Lottery) platform is designed to positively touch gamers’ lives one game at a time. The focus is on gamers rather than on the gaming platform; placing in their hands the power to transform their lives with each game they play hence the acronym “TYL”.

TYL is an Instant Play, Instant Win, instant cash out game played on SMS, USSD, and Mobile Web platforms with the short code 33088. There are currently two games available to choose from, an instant numbers game tagged “SHOKI” and “SHAFFLE” which is a daily raffle game.

According to the Managing Director/Chief Executive Officer of Humber Group, owners of TYLgames, Mr. Andrew Humber-Osofisan, “TYLgames is an innovative luxury product that is designed to positively touch gamers’ lives in real time.

“You can change your life with N100”, Humber-Osofisan said. “Currently, there are two games available to choose from, SHOKI and SHAFFLE. SHOKI is an instant number game while SHAFFLE is a daily raffle game. Every time you dial *33088#, you win a SHAFFLE ticket that qualifies you for a draw that will be done every night, making you stand to win up to N1 million.”

On transparency, he said, the regulatory authorities and Lagos State government are fully involved hence the platform desire to be credible and transparent
The Managing Partner of Cognitio Communications, Mr. Sam Osunsoko, referred to TYLgames as a vision of empowerment due to the fact that it came at a time when the economy has suffered at the hand of COVID 19 pandemic.

“TYLgames gives you the opportunity to win different range of prizes that can help you cushion the effect of the current economic hardship” he said.

Former Special Adviser to the Lagos State Government on Revenue and Taxation, Mr. Bola Shodipo, who encouraged and mandated the managers of TYLgames to make sure the platform is fair to the gamers added: “TYLgames is an economic activity that can grow the GDP of Lagos State and by extension the federal government.”

The Deputy Director/Coordinator National Lottery Regulatory Commission, Lagos Zonal Office, Mrs. Onuzulu Priscilla Nkiru, ascertained that TYLgames is approved and that Humber Group has been doing the right thing from day one.