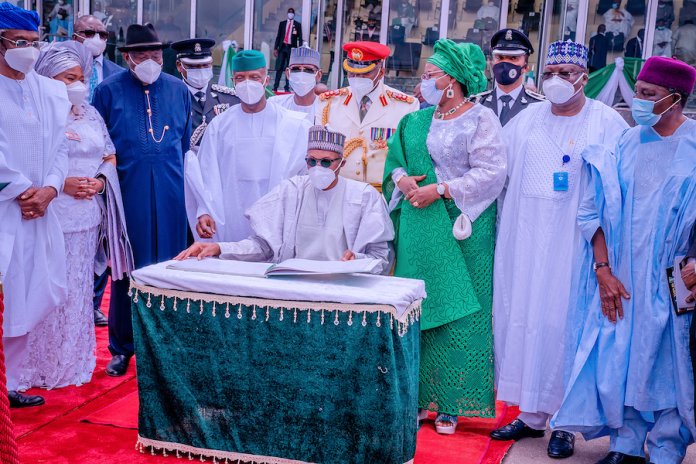 Sustained by extraordinary human resilience and inexplicable hope over the past six decades, will the Nigerian state survive the crude, cavalier notes being played on its delicate keyboards for another 60 years? Louis Achi asks
Looking back at the dark history that seared his era and peering into the future of mankind, the former French president, Giscard D’Estaing, counseled statesmen and world leaders that, “There can be no response to history without effort.”

D’Estaing’s sage counsel was clearly inspired by the tableau of human crises that defined his epoch. He was born during the First World War and fought in the second bloody global conflagration.
As Nigeria marked the 60th anniversary of its independence from Britain last Thursday, the quality and scope of response of the nation’s leaders to her peculiar history over the decades come to the fore.

Tracking back, 60 years ago, on October 1, 1960, through the instrumentality of an Act of the British Parliament, Nigeria became a sovereign, independent state within the British Commonwealth. But before this, some 46 years earlier in 1914, an important prelude to the October 1st 1960 event took place – the amalgamation of the Northern and Southern Protectorates of Nigeria.
This Act by British colonialist, Sir Fredrick Lord Lugard, enabled the coming into existence of a federating state called Nigeria. Nigeria’s sovereign independence proper came into force, as it were, on October 1st 1960 and in 1963, she became a republic.

It is worth noting that between 1914 and 1960, several significant events also helped in shaping the African, nay the Nigerian growth. These include the World War 2 and the Cold War.
One of Africa’s greatest nationalists, Nnamdi Azikiwe was appointed Nigeria’s governor-general while Tafawa Balewa continued as head of democratically elected sovereign government. Zik represented the British monarch as head of state and was appointed by the crown on the advice of the Nigerian prime minister in consultation with the regional premiers.

Zik, in turn, was responsible for picking a candidate from among contending leaders, when there was no parliamentary majority. Beyond this, the governor general’s office was essentially ceremonial. But Nigeria, both as an idea whose time had come and a fragile dream, was off the starting block.
The founding visioners of modern Nigeria are easily allocated the space reserved for national saints in evaluating the nation’s history. This is not without good reason.

Some of these folks include Dr. Nnamdi Azikiwe, Sardauna of Sokoto, Ahmadu Bello, Sir Abubakar Tafawa Balewa, Chief Obafemi Awolowo, Mallam Aminu Kano, Chief Anthony Enahoro, Chief Mokwugo Okoye and a host of other venerable personalities. Every human enterprise must have its dreamers and visioners.
The folks that rose to the occasion and did the spadework for the start-off and consummation of the Nigeria project, measured by these parameters, form the heart of the brilliant firmament of the nation’s heroes. As soon as the new nation was born, its citizens were set to embark on the journey. But shortly, the forces of separatism and regression kicked in to alter the colour and tenor of the national journey.

The complex political crises that ensued, willy-nilly, led to the first military coup and then on to a bloody secession attempt by Biafra. This was eventually put down but then the military had tasted power and would again and again intervene to ‘steady’ the ship of state.
Beyond the ‘metaphysics’ of nation building, to the credit of its peoples and leaders, it remains one entity despite powerful forces that have challenged its growth and severely tested its spirit.

Eight military regimes succeeded, beginning from 1966, interspersed between the fourth and fifth military regime by a return to civilian rule with the Second Republic between October 1979 and December 1983.
The final military regime left power on May 29, 1999, when the current fourth Republic was incepted and the president was democratically elected.” This riveting history continues as the nation marked its diamond anniversary, after 21 years of uninterrupted civil rule last week.

Given its geo-strategic heft and being Africa’s demographic and natural resources centre of gravity, much of the world rightly believed Nigeria ought to lead the journey of transformative change on the continent. They also strongly believed that she ought to provide the leadership to raise Africa to her next level. But then charity must begin at home.

Today, the stakes are extremely high. Nigerians are mindful that a failure to achieve democratic stability, through a meritorious, transparent, inclusive governance process may imperil the country’s future as a coherent state.
Given the current debatably unprecedented, divisive milieu, can Nigeria really survive the next six decades of its national journey or will it break up as many countries have done on the seven continents.

Matthew Kukah, bishop of the Catholic diocese in Sokoto, cuts to the heart of the current dilemma, when he spoke at The Platform, an annual conference organised by Covenant Christian Centre in Lagos, on Thursday.
“I think even the most optimistic Nigerian must conceive that we are nowhere near coming to define the real sense of democracy – beyond just going through the process of cycles of election. This president (Buhari) in my view in the last few years has made it very difficult for us to celebrate diversity.

“And Nigerians will concede that a reward system that is so skewed, whether in favour of men, women, Christians or Muslims, is unacceptable. We need to very quickly reset the template if we are to take our place after 60 years of independence… I am not a happy Nigerian but I remain a hopeful Nigerian.”
President Buhari has promised transformative governance and a pan-Nigerian vision but the regime’s challenges are high – ranging from galloping insecurity, nose-diving economy (negatively impacted by global oil volatility and the COVID-19 pandemic) to the new nationalism sweeping Europe and North America) and more. His historic mission to build a modern, stable democratic state founded on justice, equity and fair play remains a work in debatable progress.

It may be asked: what natural forces compel diverse social groups to unify in pursuit of common goals? Around what particular formats or templates do nation-states evolve? What forces aid the breakup of nation states? The story of Nigeria as a seemingly evolving multi-ethnic nation-state that just turned 60, looking to the next sixty years, keys into these timeless posers.

Will the nation’s grasping political elite and its divisive leadership be able to look beyond the compelling challenges and take focused action? Can they rise to the occasion, learn from their failures and make the imperative efforts to respond to history? Can Nigeria survive the next six decades?
The Dutch philosopher, Spinoza answers: “Man has the ability to shape his own destiny.” So do nations!