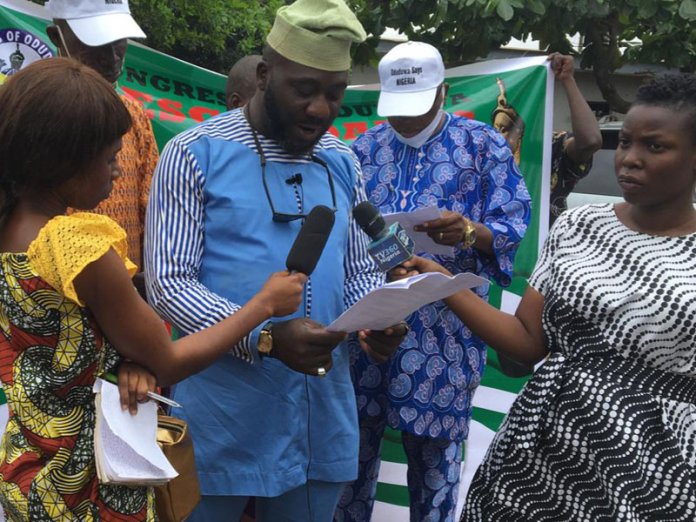 The Congress of Oduduwa Descendants (COD), on Thursday, held one million-man rally in Lagos in solidarity with a united, indivisible Nigeria.

On the occasion of the country’s diamond jubilee, the group said it is not a case of east, south, west or north, but one Nigeria.

The President-General, Otunba Arokoyo Olumide Peterson, speaking on behalf of the group pledged total allegiance to the country, downplaying “enemies attempts to fester conflict in our polity”.

While admitting the challenges confronting the nation, the group expressed confidence that together it would triumph over her adversaries.

The Congress of Oduduwa Descendants, however, called on Nigerians to “consolidate on the unity of purpose and diversity of strength of our dear country”.

It assured that Nigeria shall stay united for many years ahead in its quest for greatness.

In its speech, the group called, “My dear compatriots, the occasion of Nigeria’s 60th anniversary celebrations indeed calls for sober reflection on the journey so far.

“We are indeed a great nation blessed with good people committed to translating our hopes and aspirations into tangible realities.”

Accordingly, it noted that the words of Sir Tafawa Balewa on 1st of October 1960 still resonate in our consciousness.

He cited Balewa’s speech: “Words cannot adequately express my joy and pride at being the Nigerian citizen privileged to accept from Her Royal Highness these Constitutional Instruments which are the symbols of Nigeria’s Independence.”

“It is a unique privilege which I shall remember forever, and it gives me strength and courage as I dedicate my life to the service of our country.”

The speech read in part, “At the time when our constitutional development entered upon its final phase, the emphasis was largely upon self-government.

“We, the elected representatives of the people of Nigeria, concentrated on proving that we were fully capable of managing our affairs both internally and as a nation.”

However, it continued that they were not to be allowed the selfish luxury of focusing our interest in our own homes.

“In these days of rapid communications, we cannot live in isolation, apart from the rest of the world, even if we wished to do so.

“All too soon, it has become evident that for us, Independence implies a great deal more than self-government.”

He concluded with, “This great country, which has now emerged without bitterness or bloodshed, finds that she must at once be ready to deal with grave international issues.”

According to the president-general, those words of Balewa indeed laid the foundation for the country called Nigeria.

“And to think that we have indeed weathered the storms of life calls for celebrations. No doubt we have had our fair share of trials and tribulations. But we have remained united to see our 60th anniversary. Nigeria, we hail thee,” he added.

For Olumide, it is indeed a case of neither east nor south, west or Nonorth, but one Nigeria and this is the position of the Congress of Oduduwa Descendants. “We are not just felicitating; we are indeed celebrating the journey so far for our great country Nigeria.

“Today, we celebrate Olayinka Herbert Samuel Heelas Badmus, who is regarded as the founder of Nigerian nationalism. We also celebrate Obafemi Awolowo a nationalist and statesman who played a crucial role in Nigeria’s independence movement,” he recounted.

In their message to sons and daughters of Oduduwa on her nation’s independence, Olumide encouraged, “Never paddle wildly in a stormy sea. Be patient; complex issues should be carefully and patiently handled”.

He, however, noted that “We might have our issues as a people and as a country, but at the end of the day, Nigeria shall triumph over her adversaries. And this fact remains our overarching objective in ensuring that Nigerian remains a strong and indivisible country.”

For the PG, the occasion of her 60th anniversary celebration presents the perfect opportunity for Nigerians to consolidate on the unity of purpose and diversity of strength of her dear country for “We are better together than divided”.

He emphasised: “The Congress of Oduduwa Descendants views the lofty strides in Nigeria in the past 60 years as a step in the right direction. So, therefore, we shall not be cowed or mislead by the antics of a few disgruntled elements that have vowed to see to the disintegration of Nigeria.”

He continued that the cherished desire of the Congress of Oduduwa Descendants is that of one Nigeria regardless of our ethnic and religious affiliations.

“Nigeria has remained united in the past 60 years indicates that we are on the path of greatness. The various indices in place in Nigeria indicate such. As critical stakeholders in the Nigerian cause, we stand in absolute solidarity.

“The Congress of Oduduwa Descendants is more than confident that Nigeria shall stay united many years ahead in our quest for greatness. Those that have been fanning the embers of war should better have a rethink and embrace peace.”

Olumide further outlined their positions. “Our position in this regard is sacrosanct and unshaken. We are resolute hence this 60th independence procession for one Nigeria forever for the labour of our heroes past shall never be in vain, to serve with heart and might One nation bound in freedom, peace and unity.

“Democracy in Nigeria has come to stay, and this season of our 60th-anniversary celebration presents us with that unique opportunity once again in our quest for nation-building.”

While noting that a nation is not defined by its borders or the boundaries of its landmass Rather; a country is defined by adverse people who have been unified by a cause and a value system and who are committed to a vision for the type of society they wish to live in and give to the future generations to come.

He suggested: “What we need now is a nation of great people who live to impact others and build enduring legacies positively. Each one of us, and, indeed, all those who aspire to national leadership must bring their visions, views and styles to the business of reforming Nigeria, and the search for solutions.

“Nations and governments come and go, but people remain. Therefore people are the ultimate foundation of what is real and worthy. No free government, or the blessings of liberty, can be preserved to any people, but by a firm adherence to justice, moderation, temperance, frugality, and virtue. And this is our stance.”
[7:13 am, 03/10/2020] Rebecca Thisday: Africa Investors Group Appoints Co-Chair, Hogan Lovells’ Andrew Skipper

The organisation hinted that the initiative, which was formed earlier this year, aims to ensure the right support for existing UK investors in Africa, as well as give guidance to other UK companies on investing in the continent.

Reacting to his new appointment, Skipper expressed, “I am delighted to accept this position. I am passionate about ensuring more investment goes into Africa, and, more importantly, that these investments are targeted and informed.”

There is considerable interest, he continued, in the continent among UK companies, and the AIG hopes to harness and direct this interest.

Announcing Skipper’s new role, Wade-Smith commended, “Andrew has long-standing credentials in supporting business in Africa and has a strong network.

“I’m looking forward to working closely with him and all AIG members to help drive this important initiative forward so that we can see real and practical progress in the coming months.”