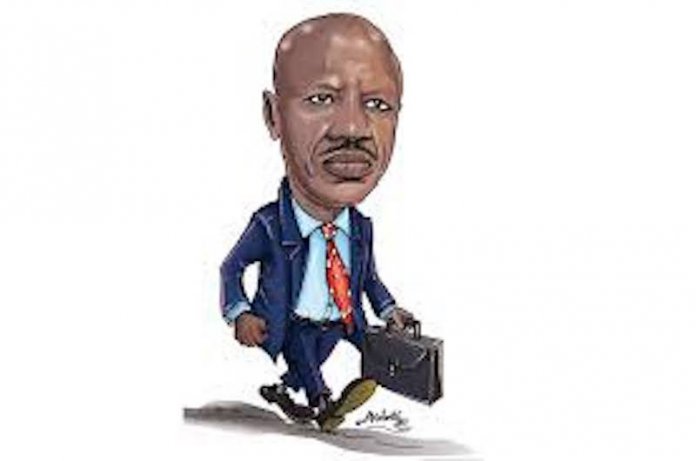 This appears not the best of times for Ibrahim Magu, who has been under suspension as the Acting Chairman of the Economic and Financial Crimes Commission (EFCC) for almost three months. A Deputy Commissioner of Police (DCP), Magu was initially arrested, detained and eventually released at the instance of the Presidency based on investigations reportedly being conducted on his stewardship. Without a clear idea as to when the investigations will end, the whole saga has been reduced to a media circus.

Dismissing media report of claims of regretting his appointment as Chairman of the Presidential Judicial Commission of Inquiry currently investigating allegations against Magu, Justice Ayo Salami is accusing the legal team of the former EFCC acting chairman of orchestrating propaganda against him. “I want to point out that such wild claims against me and the commission are not strange to me, given the manner in which the lawyers to Magu have been carrying on in the conduct of their client’s case before the commission,” Salami wrote in a press statement he signed. “Planting such lies in the media about proceedings at the panel has been their pastime. They believe that it is by engaging in such media propaganda against the commission that their client can be easily absolved of the various allegations that have been brought against him.”

The Magu legal team, in dismissing a report that their client ‘begged’ the committee, has also said that “these orchestrated stories in the public space may have the effect of shifting the real focus from the quest for facts and truth which is the focus of the inquiry to sensationalism, half-truths, propaganda which will neither benefit either Nigerians who are interested in the real facts and truth nor the panel members who have toiled for days to execute the assignment including the subject of inquiry whose proclamation of guilt or innocence will define his future career.”

Whatever may be the issues in this unfortunate saga, the crux of an anti-corruption commitment ought to be a strict adherence to the rule of law. So, the irreducible minimum in the investigation of Magu, and the EFCC, is that there be transparency and that justice be served at the end. Therefore, leaving the issue to speculations and conjectures is very much unhelpful. And the manner the Presidential Investigation Committee is being carried out leaves many questions hanging. If for close to six months the panel is still sitting and is not sure of when it would conclude its assignment, is the investigation open-ended?

Whatever may be the ‘various allegations’ against him, Magu, like every citizen of Nigeria, deserves a fair hearing. Besides, there are other issues arising from the committee’s sessions that are of concerns. Against the background that it was a recent memorandum from the Attorney General of the Federation and Minister of Justice, Abubakar Malami which suggested to President Buhari the need to sack Magu on alleged grounds of “diversion of recovered loot”, “insubordination” and “misconduct”, we wonder why he would refuse to appear before the panel he helped to constitute. If the full scope of the current investigation is to expose the extant practices that fuel abuses by officials, we endorse it wholeheartedly. But it must go beyond the career of one officer to a reform that strengthens the EFCC and its very important mandate.

We hope the Salami committee will speed up its work, conclude the sessions and turn up its report so that a decision can be taken both on Magu and the EFCC leadership. There is need for an urgent closure on this unfortunate saga that has further soiled the image of the country.