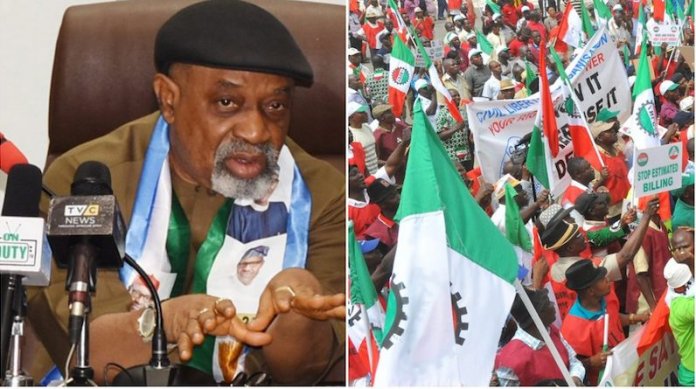 The nationwide strike by organised labour scheduled to commence today will not happen as the unions and the federal government reached an agreement this morning on the contentious issues over the deregulation of the downstream sector of the oil industry and electricity, which led to a rise in petrol price and electricity tariffs.

The meeting of the disputants which was adjourned last Thursday till today was, however, rescheduled for yesterday in a desperate bid to reach an agreement in order to avert the strike.
Yesterday’s meeting among the Nigeria Labour Congress (NLC), Trade Union Congress (TUC) and the federal government agreed on a two-week thaw for the rejig of the implementation of the policy on deregulation.

Specifically, measures to alleviate the impact of the deregulation of the downstream sector of the oil industry was agreed upon, while the federal government committed to a two-week suspension of the implementation of the electricity sector’s cost-reflective tariffs, which came into effect on September 1.

Among the agreements reached after several hours of talks which ended in the wee hours of today were palliative measures to cushion effects of the deregulation of the downstream sector, the timeline for revamping of refineries, suspension of newly introduced reflective cost regime in the electricity tariff.

In a communiqué signed by federal government side and labour representatives, it was agreed that based on the agreement that the strike and protest earlier scheduled for today be suspended.

“Consequently, the NLC and TUC agreed to suspend the planned industrial action, “Minister of Labour and Employment, Senator Chris Ngige, who read the communiqué said.

The communique said that after exhaustive deliberations on the issues raised by Labour Centres, the federal government stated: “That it has fashioned out palliatives that would ameliorate the sufferings that Nigerian workers may experience as a result of the cost-reflective electricity tariff adjustments and deregulation of the downstream sector of the petroleum industry. The palliatives will be in the areas of transport, power, housing, agriculture and humanitarian support.”

It said after negotiations on various issues raised by all parties, the following resolutions were reached and mutually adopted:
On electricity tariff, the parties agreed to set up a technical committee comprising ministries, departments, agencies (MDAs), NLC and TUC, which will work for a duration of two (2) weeks effective Monday 28th September 2020.

The committee is to examine the justifications for the new policy in view of the need for the validation of the basis for the new cost reflective tariff as a result of the conflicting information from the fields, which appeared different from the data presented to justify the new policy by NERC; and metering deployment, challenges as well as a timeline for massive roll out.

The terms of reference (ToR) include examining the justification for the new policy on cost-reflective electricity tariff adjustments; to look at the different Electricity Distribution Company (DISCOs) and their different electricity tariff vis-à-vis NERC order and mandate; examine and advise the government on the issues that have hindered the deployment of the six million meters; and look into the NERC Act under review with a view to expanding its representation to include organized labour.

The technical sub-committee is to submit its report within two (2) weeks.
During the two weeks, the DISCOs shall suspend the application of the cost-reflective electricity tariff adjustments.
The meeting also resolved that the following issues of concern to labour should be treated as stand-alone items: “40 per cent stake of government in the Discos and the stake of workers to be reflected in the composition of the Discos boards; an all-inclusive and independent review of the power sector operations as provided in the privatization MOU to be undertaken before the end of 2020, with Labour represented.

“That going forward, the moribund National Labour Advisory Council (NLAC) be inaugurated before the end of 2020 to institutionalize the process of tripartite and socio dialogue on socio-economic and major labour matters to forestall any crisis.”

On the downstream sector deregulation, the communique said all parties agreed on the urgency for increasing the local refining capacity of the nation to reduce the overdependence on the importation of petroleum products to ensure energy security, reduce the cost of finished products, increase employment and business opportunities for Nigerians.

According to the communique, “To address (1) above, NNPC is to expedite the rehabilitation of the nations four refineries located in Port Harcourt, Warri and Kaduna and to achieve 50% completion for Port Harcourt by December 2021, while timelines and delivery for Warri and Kaduna will be established by the inclusive Steering Committee.

“To ensure commitment and transparency to the processes and timelines of the rehabilitation exercise, the management of NNPC has offered to integrate the national leadership of the Nigeria Union of Petroleum and Natural Gas Workers (NUPENG) and Petroleum and Natural Gas Senior Staff Association (PENGASSAN) into the Steering Committee already established by the corporation.

“A Validation team comprising the representatives of the NNPC, Nigeria Extractive Industries Transparency Initiative (NEITI), Infrastructure Concession Regulatory Commission (ICRC), NUPENG and PENGASSAN will be established to monitor the progress of the rehabilitation of the refineries and the pipelines/strategic depots network and advice the Steering Committee periodically.”
It said that post-rehabilitation, NNPC shall involve the PENGASSAN and NUPENG in the process of establishing the operational model of the nation’s refineries.

The federal government also said that it will facilitate the delivery of licensed modular and regular refineries, the involvement of upstream companies in the petroleum refining and establishing a framework for financing in the downstream sector.

“NNPC is to expedite work on the Build Operate and Transfer framework for the nations pipelines and strategic depots network for efficient transportation and distribution of petroleum products to match the delivery timelines of the refineries as agreed,” it said, adding: “The federal government and its agencies are to ensure delivery of 1 million CNG/LPG AutoGas conversion kits, storage skids and dispensing units under the Nigeria Gas Expansion Programme by December 2021 to enable the delivery of cheaper transportation and power fuel.

It said a governance structure that would include representatives of organized labour shall be established for a timely delivery.
With the general intervention, the federal government agreed to cushion the impacts of the downstream sector deregulation and tariffs adjustment in the power sector.

It said that a specific amount is to be unveiled in two weeks time which will be isolated from the Economic Sustainability Programme Intervention Fund and be accessed by Nigerian workers with subsequent provision for 240,000 under the auspices of NLC and TUC for participation in agricultural ventures through the CBN and the Ministry of Agriculture. The timeline will be fixed at the next meeting.

Also, the federal government said it will facilitate the removal of tax on minimum wage as a way of cushioning the impacts of the policy on the lowest vulnerable.

It agreed to also make available to organized labour 133 CNG/LPG driven mass transit buses immediately and provide to the major cities across the country on a scale-up basis, thereafter, to all states and local governments before December 2021.
“10% of housing be allocated to Nigerian workers under the ongoing Ministry of Housing and Finance initiative through the NLC and TUC,” it stated.

Labour had pushed for a commitment by the government on a roadmap for revamping of the country’s refineries.
On the issue of electricity tariff, both federal government and labour seem to have agreed on principle to reconsider the new tariff regime.

The federal government team was led by Secretary to the Government of the Federation (SGF), Mr. Boss Mustapha, Ngige, Minister of Information and Culture, Alhaji Lai Mohammad; Minister of State for Petroleum Resources, Chief Timipreye Sylva; Keyamo, and Jedy-Agba.
While summing up proceedings at the meeting, Mustapha thanked organized labour for its understanding.
He assured it that the federal government will try to meet its own part of the bargain.