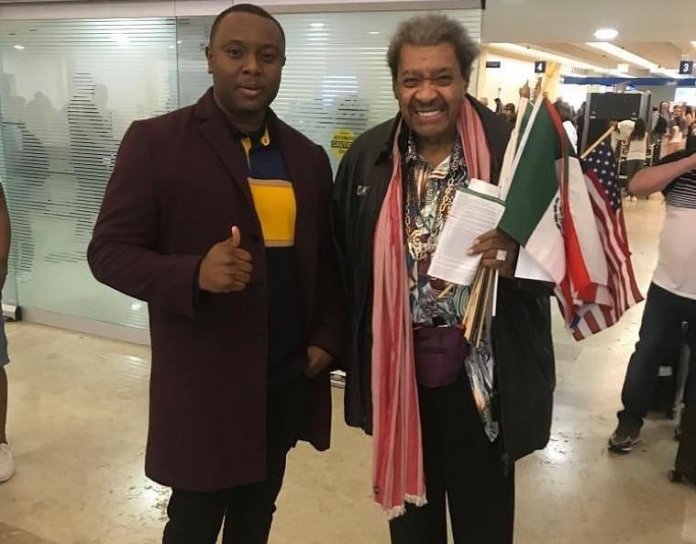 Before venturing into boxing promotions, Prince Stanley Williams had achieved successes with his different companies in the Monarch Group with interests in construction, music and sports promotions.

Monarch Promotions is licensed in USA, England, Germany, Ghana and Nigeria and working on getting licensed in Pakistan as Prince expands to being a global boxing promoter as he desires.

On April 7, 2018, Monarch Promotions debuted in Lagos Nigeria and on that night there were hard fought victories for his fighters, Sule Olagbade and King Davidson; Prince Williams seated at ringside flanked by two prominent former World Heavyweight Champions, Riddick Bowe and Ray Mercer who were his guests.

He had brought renowned fighters from all around the globe to be part of ‘Boxfest’, Stephen Okine, Ishmael Tetteh, both of Ghana, Heavyweight Eugen Buchmueller of Germany, Paul Valenzuela Jr of Mexico, Aaron Coley of USA, Patrick ‘El Elegante’ Lopez of Venezuela and De Marcus ‘Chop Chop’ Corley of USA.

With what was arguably the biggest boxing night in recent years in Nigeria, Prince Williams stepped gingerly into boxing in Africa’s most populous Nation.

He had penetrated boxing in USA, co-promoting cards in different cities before deciding to bring it home to fight-fans.

His second promotion in Nigeria in December 2018 had four WBU world title fights and was tagged ‘King of The Ring” where he continued to merge his love for Music and the ‘Sweet Science’ even as all his boxers that featured made him proud.

The World Boxing Union (WBU) awarded him their Promoter of the year 2018 for achieving so much.

President of the World Boxing Union (WBU), Thorsten Knille, while decorating Prince Williams with the honorary belt said: “WBU has chosen you as our Promoter of the Year for promoting six world title bouts in 2018, no other promoter achieved this feat.”

In 2019, he made history with a bold statement of an entry into English boxing promotions.

The ‘The Homecoming’ Card was a sell out and it took place at the historic St George’s Hall in Bradford, hometown of his key fighter, Tasif Khan, who defended his World Boxing Union (WBU) Super Flyweight title in the main event.

The iconic St George’s Hall was hosting a boxing event for the first time in its history.

His fighters as usual never disappointed as Khan, Davidson, Olagbade and new acquisition, Braimoh Komoko aka Bukom Banku of Ghana all retaining their WBU world titles and Bukom Banku fighting away from home country, Ghana for the first time won the WBU International Heavyweight title.

“I will always treat my fighters with honesty and integrity because they are very important to me,” he said.

In October 2019, Prince attended the WBC 57th Convention in Cancun, Mexico where he mixed with champions, legends and major players in the boxing world. He also had a good talk with WBC President, Mauricio Sulaiman.

“I was there to meet with the top gladiators of the fight business, make new friends as well as strike good deals for my outfit and fighters” he had said.

The novel Covid-19 pandemic that sent all sporting activities worldwide into lockdown did not spare events on the calendar of Monarch Promotions. Their planned ‘King of the Ring’ 2 in Ghana had to be cancelled.

The virus also knocked out their scheduled February date in USA where his fighters, Khan, Davidson and Olagbade were to defend their titles.

“We planned to have Promotions in Ghana, USA, Germany, Nigeria, Pakistan and England in that order in 2020 but we all know how all promoters had their events cancelled or postponed indefinitely due to Covid-19

“We are still hoping to have one or two events before the year runs out as our fighters and their fans have really missed a lot.”

After he was named WBU promoter of the year 2018, he had said: “Making champions before my countrymen give me pleasure and at Monarch, it is our constant pursuit to bring fight fans the most exciting fights”