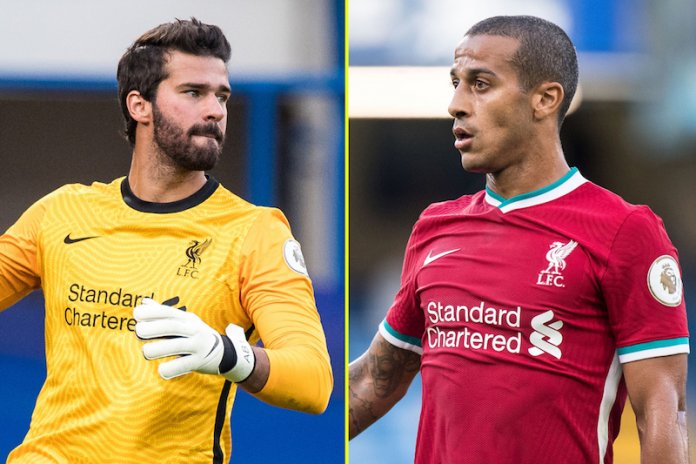 Alisson Becker and Thiago Alcantara are both injury doubts for Liverpool ahead of their Premier League clash with Arsenal this evening.

The Reds pair have been unable to train with the rest of the squad in recent days, and manager Jurgen Klopp is reportedly awaiting an update on their availability.

Liverpool’s back-up keeper Adrian is ready to fill in for Alisson, should the Brazilian fail to recover in time to feature at Anfield, but Klopp is prepared to give his No 1 time before selecting his first XI.

Thiago joined Liverpool from Bayern Munich this month in a £25m deal, and the Spaniard could be ruled out of Liverpool’s third league game of the season due to an unspecified issue, according to The Times.

The midfielder made his Liverpool debut last week when the reigning champions recorded a 2-0 away victory over Chelsea thanks to Sadio Mane’s brace.

Jordan Henderson and Joel Matip have already been ruled out of Monday’s game due to more significant injuries, but Joe Gomez is available after he missed last weekend’s game.

Fabinho, who deputised for Gomez, could revert back to his usual role at the base of midfield should Thiago fail to prove his fitness.