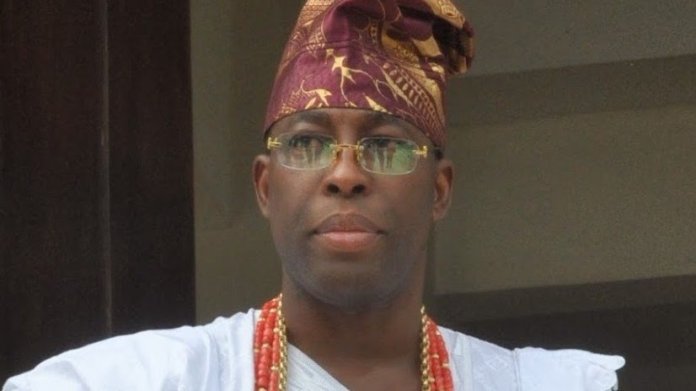 Businessman and socialite, Otunba Lekan Osifeso, has joined the ranks of chiefs and traditional supremos in Ijebuland. The title bestowed on Osifeso is renowned as being one of the most prestigious in the land, which goes to indicate the extent to which the businessman has been recognised and appreciated.

The Awujale of Ijebuland, Oba Sikiru Adetona, personally conferred the title of Olotu-Olowa on Otunba Lekan Osifeso. According to Awujale, Osifeso’s role in the socio-economic transformation of Ijebuland and the Ijebu people in recent years can neither be exaggerated nor disregarded. The Awujale further explained that the Olotu-Olowa title was something that the father of Lekan Osifeso worked towards during his own time, and has been bestowed on the son because he (the son) perfected the father’s efforts.

Those in the know would recall that Otunba Lekan Osifeso recently unveiled his Retro Construction company. This new baby of Otunba Osifeso was retrofitted from the framework of his Lekai Construction company, and is expected to—with its organisational structure of experienced, tech-savvy and professional engineers—quickly overtake other construction companies in the country, as well as shake the profit and engagement curve of multinational construction entities within the Nigerian corporate scape.

According to what is on the airwaves, this event is actually a hasty gathering, in respect of the Covid-19 measures. The main chieftaincy ceremony has been scheduled for January 5, 2021. In other words, a few months from now, Ogun State will grandly welcome a new chief, the Olotu-Olowa of Ijebuland, Chief Lekan Osifeso.