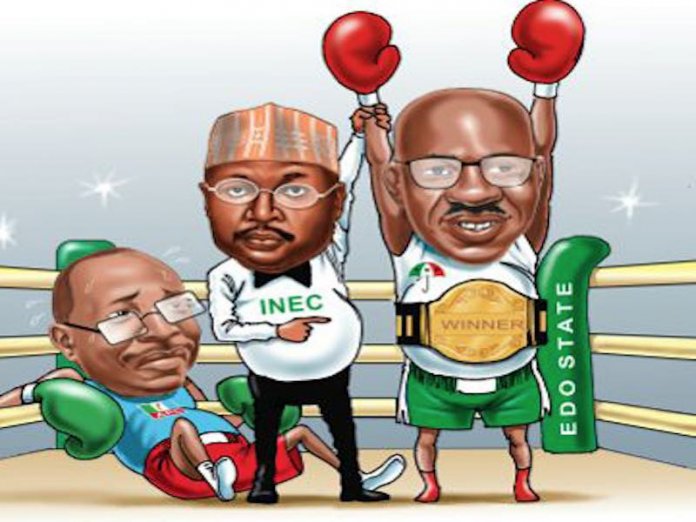 While we congratulate the re-elected Governor Godwin Obaseki, it is very pertinent to take stock of what transpired in the course of the Edo State gubernatorial election so that useful lessons can be drawn for the future. But first, we must commend the Independent National Electoral Commission (INEC) for a job well-done. Observers and most independent analysts have given thumbs up for the manner in which the electoral body conducted the poll. We can only hope that INEC is gradually living up to its responsibility as an independent, credible and unbiased umpire.

Meanwhile, despite the fact that the pre-election campaigns in the state were reduced to a contest of personalities and laced with harsh rhetoric, hateful speeches, vandalism and threats, seldom has a stand-alone poll been so relatively peaceful and a victory so decisive. Although a woman lost her life and there were pockets of disturbances in a few areas, the consensus remains that it was one of the best elections in recent times. Two things stand out in Edo: the deployment by INEC of more technology (the z-pad) for uploading polling unit results in real-time, and the neutrality of the security agencies.

The weakest link in elections in Nigeria has always been the collation of results. In Edo State, no manipulations could take place at this stage when citizens were already aware of the official results from their polling units. This has prompted civil society orgnisations and the media to urge the National Assembly to accelerate a reform of the Electoral Act to legalise electronic transmission of results. What the INEC results viewing portal deployed for the Edo State gubernatorial election has demonstrated is how public access to polling unit results increases the integrity of the electoral process and encourages acceptability of outcomes.

It is also important to note that in Edo, the security agencies helped rather than subvert the process unlike in the past when they were openly partisan. President Muhammadu Buhari admitted as much when he received Governor Obaseki on Friday. The statement by the president that he warned the police and other security agencies to be neutral shows where to locate the bane of credible elections in Nigeria. No matter how well INEC prepares or how professional and neutral its officials are, once the security agencies are partisan or compromised, they scuttle rather than protect the process. It is therefore our hope that this same neutrality will be displayed in the Ondo State gubernatorial election scheduled for next week Saturday.

However, there were two ugly developments that highlight the bane of democracy in Nigeria. The first is the pre-election choice of candidates for the two political parties. The ruling All Progressives Congress (APC) dumped the sitting governor and went for the opposition Peoples Democratic Party (PDP) candidate in the previous election. Not to be outdone, the PDP embraced the governor who has now been elected on their platform. In ideal societies, political parties represent not only individuals who share similar interests and views on critical issues but also groups with special concerns and specific agenda for change. That political parties are mere vehicles for seeking power without any ideology or guiding philosophy is very telling on the state of affairs in our country today. That needs to change if we must deepen our democracy.

The second issue is the ease with which governors congregate in states where stand-alone elections are held. This is not only disruptive of the election process, it has exacerbated the corruptive element of vote-buying. There must be a way to discourage this without violating the rights of free movement of citizens. But inall, the experience of Edo poll has proved conclusivelythat reliable electronic transmission of results could eliminate disputes over electoral fraud and rigging of results and thereby obviate the need for long-drawn litigations. We therefore call on INEC to push for theadoption of electronic transfer of results, if only to prove its neutrality as an umpire committed to free and fair elections in Nigeria.