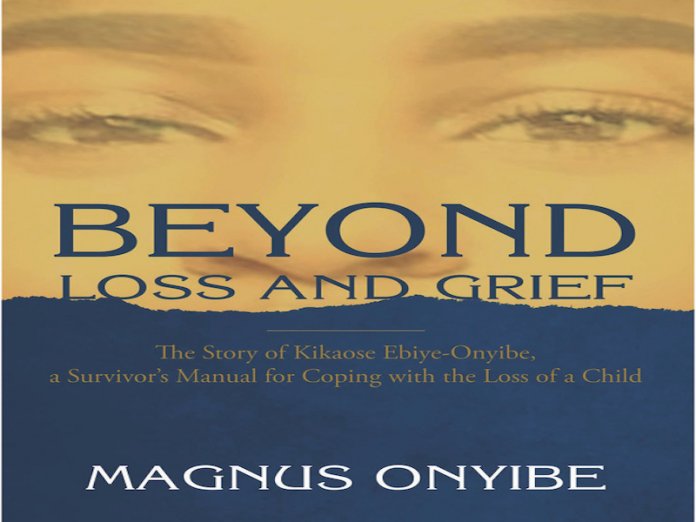 Beyond Loss and Grief (The Story of Kikaose Ebiye-Onyibe, a Survivor’s Manual for Coping with the Loss of a Child), by Magnus Onyibe, Narrative Landscape Press, Lagos 2020

BOOK REVIEW
Okechukwu Uwaezuoke
When grief sets in, the trifles of everyday life recede into the background. Benumbed and labouring under the scourge of series of “why’s”, the mind helplessly gropes in the dark, seeking to make some sense out of it all. In desperation, it reaches out for – and clings to – possible logs of solace floating in the raging sea of despair. “I was broken,” Magnus Onyibe writes in the book, Beyond Loss and Grief (The Story of Kikaose Ebiye-Onyibe, a Survivor’s Manual for Coping with the Loss of a Child). “I went numb. Sounds and voices became echoes. I heard nothing. I heard everything. My midnight, my eclipse had occurred at high noon. My daughter was no more…”

Thus, the reader easily empathises with the bereaved author as he describes his return with his family to Selly Oak student village, opposite the University of Birmingham, where his daughter Kikaose Ebiye-Onyibe lived before her death on April 12, 2017.

Onyibe hopes, with his 161-page book, to rise above his pains by reaching out to other bereaved families with the intent that “this book would instruct bereaved people on how to cope with the loss of their beloved ones.” Even so, as the heart-rending narrative progresses, he cannot help but seek answers to questions swirling around the circumstances that preceded the death of his daughter. These questions – bordering on wrong diagnosis of the deceased’s ailment, suspected cover ups as well as obvious cases of negligence – are the types, the answers to which he may never know.

Flipping through the pages of the book, the reader gets more and more acquainted with the warm personality of the departed, whose strict adherence to the tenets of evangelical Christianity defined her brief earthlife. He thus gains access into the close-knit intimate circle of the Onyibes. Apparently, Kikaose had, even at a very tender age, left no one in doubt about her sense of purpose, which explained her activities both before and while she was studying at the UK-based University of Birmingham. The fact that she was adored and warmly eulogised by her fellow students and the staff of the university, including the vice-chancellor Sir David Eastwood, eloquently attested to her sterling qualities. Ditto the fact that the officiating pastor at her funeral was said to have referred to her “as an angel who was with us briefly but gone to be with God.”

That the author remains inconsolable in his grief is expressed by his continual rehash of the why’s and what-ifs as well as through his empathy for fellow bereaved parents. “The immutable truth is that no matter how strong you are, the death of your child will devastate you,” he writes. “At first, it will seem unbelievable. You will be in denial of what has happened. When you eventually accept that your child is gone, the pain you will feel will be so deep that you will wonder if you will ever get over it. This feeling is universal because if you spoke to anyone who has lost a child, this is what they will tell you. This is what unites us as grieving parents.”

This book, an outlet for his pent-up emotions, seethes and overflows with his good intentions. This is evidenced by the dedication of eight of its pages to profiling 20 other youths, from different ethnic, socio-cultural and economic backgrounds, who lost their lives in tragic circumstances. This gesture, according to the author, is to help the families and friends of the departed ones “heal faster”.
Beyond Loss and Grief… is a book that should be read by not only those smarting from a sense of loss, but also by everyone else who would be a pillar of support to the bereaved.