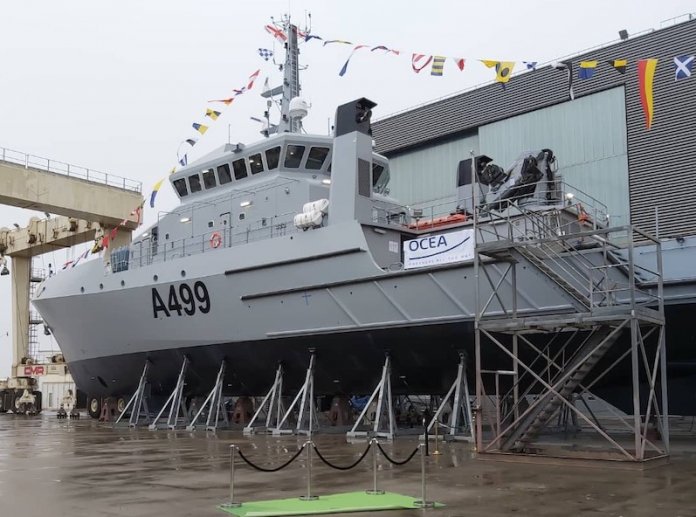 In line with its promise to better equip the Hydrographic Department for enhanced maritime safety, the Nigerian Navy (NN) has inaugurated the nation’s first purpose-built survey vessel.

The hydrographic survey ship was unveiled at the OCEA shipyard on Thursday morning at Les Sables d’Olonne, France, by the Chief of Naval Staff (CNS), Vice Admiral Ibok-Ete Ibas.

The construction of the new vessel started in 2018 and it is scheduled to be inducted into the NN fleet next year.

This is just as the navy is also expecting a purpose-built Landing Ship Tank (LSD) warship from the United Arab Emirates (UAE), which is expected to boost the service’s operation against maritime crimes.

Ibas who was represented at the ceremony by the Group Managing Director of Nigerian Navy Holdings Limited, Rear Admiral Abraham Adaji, said the vessel was conceived as replacement for the Nigerian Navy survey vessel, NNS LANA, which was decommissioned about 10 years ago.

Noting that the inauguration marked a giant stride in the efforts to realise the dreams of restoring and enhancing the NN’s survey capability, the CNS said surveying and charting of the country’s waterway play crucial roles in ensuring navigation safety.

He added that the ship would serve as critical component of deployment of naval power for enhanced maritime security in the Gulf of Guinea (GoG).

In a statement by Director of Naval Information (DINFO), Commodore Suleman Dahun, the CNS thanked President Muhammadu Buhari for his relentless support towards the recapitalisation of NN’s fleets.

At the unveiling ceremony, the Chief Executive Officer (CEO) of OCEA shipyard, Roland Joassard who was represented by Fabrice Weinback said the vessel was the result of excellent cooperation between the Nigerian Navy and OCEA teams.

He praised the Nigerian Embassy staff and the Nigerian Building survey team for their commitment and professionalism, adding that the new ship demonstrated Nigeria’s willingness to improve its knowledge of the country’s waters.

The CEO said the vessel was equipped with latest technology, adding that integrated logistics support services such as training and on-site technical assistance would be provided the crew.

Also at the ceremony was Nigeria’s Ambassador to France, Mrs Modupe Enitan Irele.