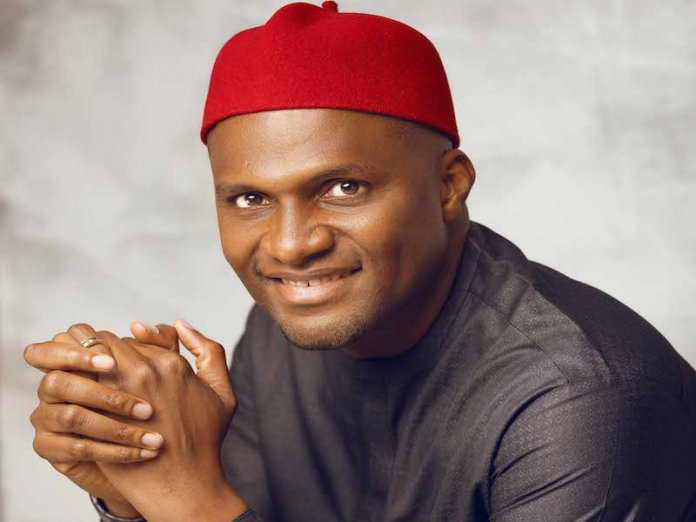 At forty, his life isn’t fortuitous but with fortitude and foresight, he’s built a business empire adored by many yet craved for by many more. His grace, grit and gumption illustrates his industry as an indefatigable entrepreneur. A champ in entrepreneurship, his conglomerate straddles the oil and gas, financial, real estate, health care and the hospitality sectors. His swag underscores his class yet Dr. Chimaobi Desmond Anyaso, President of Oil Rigs Resources Limited and the chairman of Caades Group, possesses the conviviality and camaraderie often absent in Nigeria’s billionaires, writes Bayo Akinloye

As the women -40 of them -sing in unison, with their dainty feets delicately stirring the dust of the earth. The ululation of their mellifluous voices rend the air. Other women in the village can’t help but join in the excitement. As they dance, tears roll down their cheeks. Tears of joy and as if choreographed, they bring out white handkerchiefs to damp their faces.

“Why aren’t we going to dance? We’ll dance until the break of dawn,” the women chorus like canaries.

At forty, his life isn’t fortuitous but with fortitude and foresight, he’s built a business empire adored by many yet craved for by many more. His grace, grit and gumption illustrates his industry as an indefatigable entrepreneur. A champ in entrepreneurship, his conglomerate straddles the oil and gas, financial, real estate, health care and the hospitality sectors.

His swag underscores his class yet Dr. Chimaobi Desmond Anyaso, President of Oil Rigs Resources Limited and the chairman of Caades Group, possesses the conviviality and camaraderie often absent in Nigeria’s billionaires

Watching those women dance, it’s easy to understand why billionaire Anyaso is loved, honoured and well-known by Abia people.

Back in Lagos, the tall, handsome, fashionable business tycoon lounges in his living room, his adorable and delectable wife (Adanna) beside him while their children are in play mode. Confident, convivial and conscientious, Anyaso exudes a camaraderie rare among wealthy individuals. There’s no nouveau-riche air around him.

Born September 16, 1980, Anyaso has grown to become an enduring entrepreneur in world’s most populous black nation, Nigeria. His vantage point is balanced on virtues and values; people-centric.

A native of Igbere in Bendel Local Government Area in Abia State, Anyaso’s illustrious life and extraordinary achievements illustrated by his childhood.

“I’m from a polygamous home,” he reveals sotto voce. “My childhood memory is filled with harmony and happiness in the home. It’s one big united family. We cared for one another and it didn’t matter we were not all born by the same mother. It was, and still is, a closely-knitted family.”

As a young child, life was blissful for billionaire Anyaso as he was nurtured by loving parents. Nevertheless, as a child, he had his eyes set on something. He left nobody in doubt as a kid about his entrepreneurial ingenuity.

“Even though I lacked nothing as a child, I bought things for myself to sell back home whenever I accompanied my father to the market. It came naturally to me. Well, my dad and mom were shrewd traders too and were successful in their own right,” explains Anyaso.

Yet, what he’s achieved so far in business dwarfs all the successes of his parents and how he makes extraordinary things look ordinary.

“I drew inspiration from my parents. It’s also interesting that when started out, I worked for a young man who already owned a business. I’ve always loved to venture into business,” he points.

It was little wonder that he started working right before he went for the one-year compulsory national youth service programme.

“In fact, I registered my own company while I was still working for someone. I knew it was just a matter of time for me to start my own business,” a confident but unassuming Anyaso reveals.

Sitting atop the board of many companies, Anyaso, a seasoned professional marketing expert with years of experience in the oil and gas industry, is also a member of Ikoyi Club, chairman, Board of Trustees of Miles Club, and the vice president of Umuaba Connect Association of Nigeria, Anyaso has always wanted to be independent.

A birthday boy last Wednesday, Anyaso celebrated his 40th year on earth. With a smile on his face, he recollects something about his childhood: it was grit and gumption. Having completed his primary and secondary school education, Anyaso was determined to live the South-East having spent all his life there. His efforts to gain admission into the University of Lagos fell through because he didn’t have all the required O’Level results.

“I was determined not to waste a moment at home. Incidentally, Ebonyi State University was newly established during that period. I was willing and ready to study any course. In the end, I studied English and Literature,” he recalls.

“I have always wanted to be a businessman. For me, it didn’t matter what course I eventually studied. I knew where my passion lay and I was convinced I would excel in business.”

He soon graduated with a BA in English and Literature. Shortly after, he obtained a Master’s degree in Management at the University of Lagos; Petroleum Marketing Management from Atlas University, Philadelphia; a certification in Executive Management Development from the Peter J. Tobin College of Business at the St. John’s University, Manhattan, New York in the United States.

He is a recipient of the Forbes African Achievers Award for community development and was awarded ‘Democracy Youth Icon of the year 2017’ just as he was selected by Vanguard and Champion newspapers as one of the ‘Top 20 Business Professionals’ in Nigeria. For his contribution to Nigeria’s development and integrity, he was honoured with a honorary doctoral degree by the European America University (Commonwealth of Dominica).

Similarly, he worked with Aquitane Oil and Gas Ltd which apparently served as a launchpad for him to venture into the oil and gas sector.

When Anyaso floated his first company, Caades Oil and Gas Ltd., not a few people considered it ambitious and risky. In reality, though, that kind of move was what he had prepared himself for even as a child right into his adulthood. With his characteristic astuteness and acuity, Caades soon led to the formation of Ceecon Energy Oil and Gas Ltd, a firm that has since generated a turnover in excess of $1 billion consulting for international companies like Addax and Vitol.

His entrepreneurial gumption has led Anyaso into dealing in the financial, real estate and health care sectors, founding the SC & C Bureau de Change Ltd (an elite ‘Class A’ bureau de change granted licenses by the Central Bank of Nigeria in 2009), Chimbaland Properties & Investment Co Ltd, among others.

“My wife has been what I need to have a happy life and successful career,” he emphasises as his kids giggle, playing around in their home.

“My wife means a lot to me. A happy home is more than anything else.”

Always dressed to the nines, Anyaso isn’t hesitant to describe himself as being fashionable.

“I’m a fashionista,” he acknowledges. Even without saying, the billionaire entrepreneur exudes class and swag whether he’s donning a native, foreign, formal or casual attire.

But Anyaso isn’t satisfied with what he’s achieved in life.

“It’s my dream to serve my people to the best of my ability,” he asserts. Yes, there’s so much more he can in a country plagued with abject poverty. In the 2019 parliamentary election, on the platform of the Peoples Democratic Party, Anyaso contested to represent Bende Federal Constituency in the House of Representatives. Though unsuccessful, he hasn’t given up.

For him, Nigerian youths have a big role to play in Nigeria’s politics and governance.

“This isn’t about personal aggrandisement. It’s about giving better representation for the people. It’s about standing up and representing the youth. It’s about passion to improve how things are done and better the lot of the people,” he explains.

Will he try again? Anyaso doesn’t give up in doing what’s for the good of the people. As a passionate philanthropist, during his 40th birthday, he empowered various women with machinery and cash as illustrated at the outset. He looks the grassroots as a down-to-earth personality.

Not given to blowing his own trumpet, Anyaso’s generosity and developmental drive are clearly seen in his establishing tuition-free schools for indigent children through Ahuoma Anyaso Education Foundation. In addition to that, his Chima Anyaso Foundation runs free medical outreach across Bende Federal Constituency. In the last one year, the foundation has provided free medical care to over 6,000 Nigerians across the 10 autonomous communities that make up his constituency.

While the country was on lockdown occasioned by the COVID-19 pandemic, Anyaso’s benevolence shone through as he single-handedly provided trailer-loads of palliatives (foodstuffs and health care materials including santizers and cash).

At 40, life is opening new vistas for Anyaso. He’s grateful for what he has as he seeks new challenges and better ways to make his society a better place.