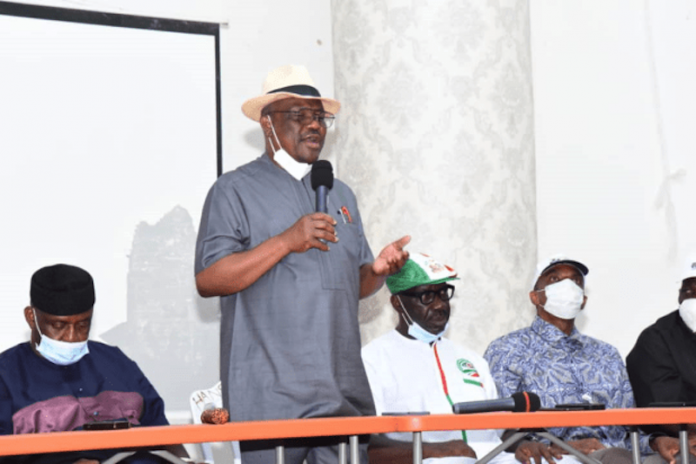 The Rivers State National Assembly caucus has cautioned the Inspector General of Police, Mohammed Adamu, that on no account should anything happen to the Governor of Rivers State, Nyesom Wike who is on an official assignment to Edo State.

This was contained in a statement jointly signed by Senator George Sekibo and Hon. Kingsley Ogundu Chinda, both leaders of the Rivers State, National Assembly Caucus.

The caucus condemned the siege allegedly laid by over 300 police men on the hotel Wike and other Peoples Democratic Party, PDP governors lodged in Benin City, the Edo State capital.

The caucus said “the attention of the Rivers State caucus in the National Assembly has been drawn to the very unfortunate, undemocratic and unjustifiable siege by over 300 gun wielding policemen on the Hotel where His Excellency, NYESOM E. WIKE, Governor of our dear Rivers State is staying in Benin City, the Edo State Capital.

“We are troubled that this shameful action is led by no less a person than DIG Leye Oyebanji who has and is still issuing threats to the Governor to leave Edo State even when the Governors of Kano and Imo States are freely moving around Benin City without molestation, threats, harassment, intimidation and confinement.

“We are aware that the Governor is the Chairman of the Peoples Democratic Party’s National Campaign Council just as Ganduje represents the same to the APC. Furthermore, the Rivers State Governor has committed no offense and is also protected by immunity under our laws.

“We are afraid that this action will further widen the fractured parts and points of Nigeria especially at this time when the report of the obvious slide to the status of a failed State. Let us warn that should anything untoward befall our Governor, the consequences could be dire as we call on Mr President to reign in all actors in this shameful, dishonorable and undemocratic show of shame and ensure a free, fair, credible and peaceful election.”

They added that the international community should take note of the conspirators in this naked rape on democracy and democratic institutions in Nigeria.