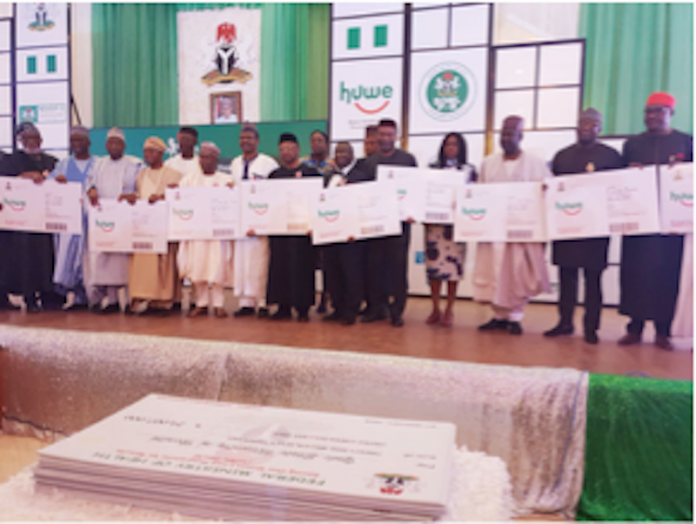 President Muhammadu Buhari’s signature health programme, the Basic Health Care Provisions Fund may soon become the joke of the century with the recent removal of the 2.5 per cent allotted to the Nigeria Centre for Disease Control, an agency at the centre of fighting a pandemic for the country. Martins Ifijeh writes

Call Basic Health Care Provisions Fund (BHCPF) Nigeria’s star programme for the health sector and human capital development and you will be right. It is one model with the capacity to secure health access for millions of vulnerable Nigerians who otherwise are being deprived of healthcare, including disease prevention and management.

Its launch in 2018 signaled the beginning of a new dawn for the country, especially with the Executive and National Assembly both agreeing to fully implementing the 2014 National Health Act (NHA) which devoted one per cent of the Consolidated Revenue Fund (CRF) of the nation’s budget to the initiative – a move that saw the earmarking of N57.17 billion to the fund in 2018.

To be clear, the BHCPF is an additional fund outside the health sector allocation in the national annual budget dedicated to address basic healthcare needs of Nigerians. Since its launch, the federal government has been allotting at least N55 billion for its execution yearly, especially in areas of primary healthcare strengthening and service delivery. It has also mobilized additional resources from the government of Nigeria and development partners to improve the delivery of essential basic health services to Nigerians.

To ensure the fund reaches all areas of concern, the federal government and its partners developed an expansive guideline for its distribution with focus on primary healthcare, health insurance, disease prevention, emergency medicine, health personnel, among others.

At the second THISDAY Healthcare Financing Summit held in Abuja in 2018, the then Minister of Health, Prof. Isaac Adewole, under whose leadership the BHCPF was nursed and kick started, said the detailed blueprint of the health programme up to disbursement and execution phase, has drawn many international bodies and nations into aligning with the star initiative, with the World Bank, Aliko Dangote Foundation, among others donating funds to supporting government’s CRF earmarked for the programme.

Sudden defunding of NCDC through BHCPF

But it appears the otherwise laudable initiative; – one that the present government will be easily remembered for if properly managed – may begin to give room for concern, especially with the distortion of the blueprint and the obvious removal of the 2.5 per cent of the fund for disease prevention, surveillance and management.

A document seen by THISDAY recently, tagged “Guideline for the Administration, Disbursement and Monitoring of the Basic Healthcare Provision Fund” has shown that in the 2020 revised disbursement arrangement, the part allocated to the NCDC despite being in the middle of a pandemic, has been yanked off with the fund now shared to other areas.

Sharing her thoughts with THISDAY, a public health expert, Chioma Nwakanma-Akanno said this was a bad time to defund public health emergencies, as the action by the review committee could amount to threat to national health security and Nigerians who are daily being guided by the NCDC out of the COVID-19 pandemic that has killed almost 1,100 persons in Nigeria since the outbreak in February.

She said: “In 2017 alone, four major diseases outbreaks resulted in over 40,000 cases and around 1,000 deaths in Nigeria. Guess who these outbreaks affect the most? the grass root. So why would the government defund public health emergencies. It is confusing that this 2.5 per cent BHCPF is part of the NHA 2014.

She believed cutting funds to NCDC couldn’t come at a worse time, adding that Nigeria’s health, social and economic systems face unprecedented pressure from the effects of the COVID-19 pandemic.

The health communicator said the funding of public health emergency preparedness and response through the BHCPF provides consistent and reliable funding to strengthen and increase ownership of health security at the national and state levels, as well as ensures Nigeria was better prepared for public health emergencies.

She added: “NCDC forms a core part of emergencies and should not be excluded completely. Funds can be targeted to strengthening emergency preparedness and response at the PHC levels to enhance service delivery in an epidemic. The funding should reflect the coverage of all Nigerians. Disburse the funds. It might look good on paper, but if not implemented it is useless. Nigerians deserve accountability and a right to live.”

While the committee which revised the 2018 guideline of the BHCPF appear not to know the importance of public health emergencies and health security to a nation, there appears the Federal Ministry of Health which approved the new guideline is stocking for war with stakeholders and health bodies expressing their concerns over government’s volte face for disease prevention and surveillance under the BHCPF, despite the nation experiencing its biggest disease threat since the history of the country.

According to the Health Sector Reforms Coalition (HSRC), the rationale for the review of the guideline was unclear as no reference was made to flaws from the 2018 guideline. It also wondered why disease prevention and surveillance was defunded in the BHCPF.

According to the Nigeria Centre for Disease Control and Prevention Act 2018 seen by THISDAY, part v (financial provisions) says the Centre shall establish and maintain a fund from which shall be defrayed all expenditure incurred by the Centre for the purpose of the Act.

Directly, part v, section ‘g’ of the Act says that 2.5 per cent of the five per cent of the BHCPF under section 11 (1) of the NHA 2014 shall be one of the extra budgetary allocation accrued to the Centre.

HSRC said the defunding of disease prevention and surveillance in the BHCPF has a legal implication and it can only stand if the law that set up NCDC is amended to take out the clause that allocates BHCPF to the agency.

Will the Minister of Health, Dr. Osagie Ehanire allow the federal government’s signature health programme go the way of other government otherwise initiatives that started well and ended in shambles because of bizarre distortions? Time will tell.