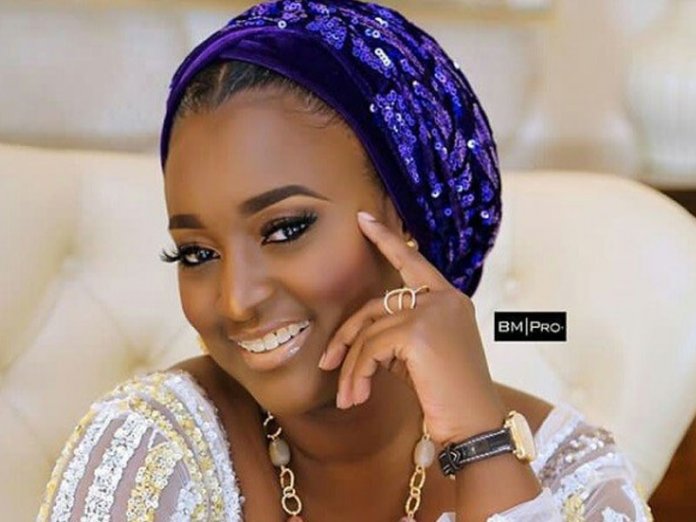 That Rahma Indimi, daughter of Borno State-born billionaire oil magnate, Alhaji Mohammed Indimi, is confident is not in doubt.
Apart from her privileged background, her marriage to Mohammed Babangida, the first son of former Nigeria’s military Head of State, Gen. Ibrahim Babangida, has further enhanced her chances of getting a mention in the media always.

Even so, since the marriage packed up, there has always been one awful story or another about the couple. At different times, they have had to drag each other before different courts in the country over the custody of their four kids, making them hit the cover pages of many publications in the country.

Curiously, while the couple warms up to appear in court for the next proceedings in the lingering marital palaver, news filtered in, last week, that the estranged couple are back in each other’s arms.
What fuelled this rumour was not unconnected to a statement credited to Rahma. It all began when a news website accused Rahma of cropping off the kids of Mohammed’s second wife, Umma, from the family portrait they took with the patriarch of the family, Babangida, during the last Sallah celebrations in Minna in July.

Reacting to the news, Rahma, via her Instagram page, attacked the website, claiming the story was false and that she and her estranged husband had reconciled.
“How is this even news? Kai, anything to make money abi? Well, first of all, there are three of my children in the picture, not two. Secondly, I do not have my co-wife’s permission to post her children and Muhammed specifically told me no social media. Muhammed and I have reconciled and we are in a good place. So please stop sh**t stirring,” she had said.

However, a source denied the claim, saying it was just a figment of her imagination.
According to the source, Mohammed has only had to relax some of his actions towards her, Rahma, because of his children whom he loves so much; hence, the invitation extended to their mother to be part of the last Sallah at the family home.

The source added that Mohammed knows the import of huge responsibilities thrust on him as the heir to the Babangida Dynasty and does not want any form of distraction.
“Moha, as fondly called, is more concerned about his image and people’s perception of the family. That’s why he hardly attends parties and events, and most importantly, abhors all this social media razzmatazz.

“Besides, it’s already too late for Rahma to win back Mohammed’s heart, as he cannot quickly forget what actually transpired all through the time they have been separated,” the source added.

He added that Mohammed has moved on and feels content with his first love, Aisha Umma Wali, the daughter of Ambassador Aminu Wali, whom he married in 2008 as second wife, after some unresolved issues with Rahma, who moved out of their matrimonial home with her kids.

It will be recalled that Rahma, who owns Deva Petals and Fashion Cafe, a luxury fashion platform in Abuja, announced in July 2016 her final split from Mohammed. Prior to that decision, efforts by the two influential families to bring them back together failed over irreconcilable differences.