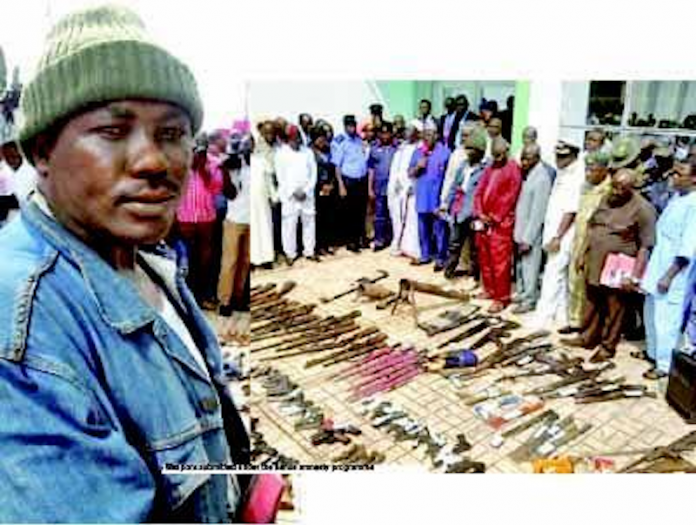 Controversy has continued to trail Tuesday’s killing of Benue warlord, Terwase Agwaza a.k.a. Gana by the Army with Tiv and Jukun youths trading blames over the incident.

Gana, who had earlier been declared wanted by the Police and the Nigeria Army and on whose head a ransom of N50 million was placed by the Benue State Government was killed by the Army after intercepting the convoy conveying him and other members of his gang who had earlier in the day surrendered their arms at the Akume Atongo Stadium in Katsina Ala in embrace of amnesty granted them by Governor Samuel Ortom.

Since the news of his killing was made public by the Army, there have been mixed reactions from different segments of the public particularly from Tiv political and traditional leaders and their Jukun neighbours.

In a press release made available to newsmen in Nasarawa State, the Tiv Youth Forum had accused the Taraba State Government and the Jukuns of complicity in the killing of Gana alleging that the sum of N400 million was paid by Taraba Government to execute Gana.

The Tiv youths equally accused former Chief of Army staff, Gen. T.Y. Danjuma (Rtd) of paying the sum of N250 million towards the execution of Gana.

But in swift reaction, the Federation of Jukun Youths, in a press release signed by its convener, Agbujoro Agya, a copy of which was made available to THISDAY in Jalingo, commended the military for doing a great job by killing Gana, saying the dissatisfaction expressed by the Tiv youths was an indication that they had been beneficiaries of his criminal activities.

Insisting that the condemnation of Gana’s killing by the Tiv youths was condemnable, the Jukun Youths noted that having returned to criminal activities after being given amnesty in 2015, there was no guarantee or assurance that he would turn a new leaf if given another amnesty.

Dismissing the alleged payment of N400 and N250 million by Taraba government and Gen T.Y. Danjuma to kill Gana as laughable, the statement wondered how Taraba State government could raise such an amount of money considering the meagre monthly subvention that accrues to the state saying the allegation was aimed at staging the Taraba state government into the killing which they maintained was a purely military operation.

Calling on the Tiv youths to desist from defending ‘a terrorist’, the Jukun Youths claimed that for the Army to be on Gana’s trail for four years without being able to apprehend him was an indication that he was being shielded by his people.

Meanwhile, wife of the militia leader, Mrs. Wantor Akwaza has demanded the sum of N5 billion from the Federal government as compensation for the killing of her husband.

Making the demand while speaking with Journalists in Makurdi, Mrs. Akwaza also called on the Federal government to investigate the circumstances surrounding the killing of her husband.

According to her “After the initial amnesty, he went back into the bush. When the second amnesty came, he was briefing me about the development.

“I spoke with him on Saturday and he told me that he was going for the amnesty and that he is tired of the life he was living. That if the amnesty is genuine, he want to surrender his life to God and work for him. My husband was not a wicked person”, she stated.