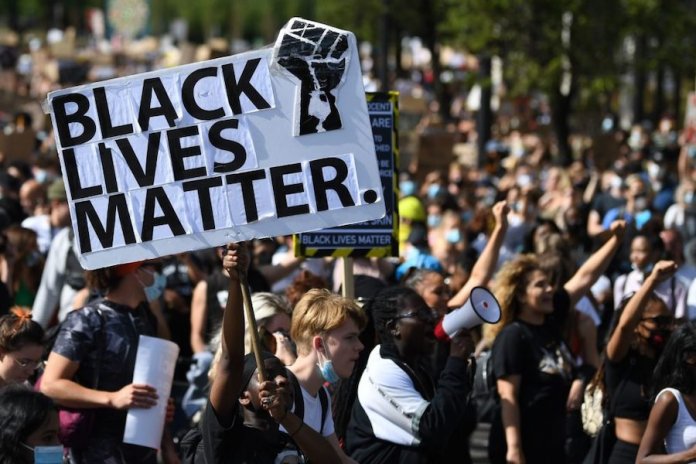 The West’s knee has been on the neck of black Africa for centuries, writes David Mba

Since the death of George Floyd, the screams of ‘Black Lives Matter’ (BLM) have never been as loud, heard across the globe and from all races. Nations and organisations are rushing to show allegiance to the movement, producing enthusiastic headlines about change.

The focus so far has been on the glaring socio-economic inequalities experienced by the black American and European populations, exacerbated by the disproportionate effect of the coronavarius.

The BLM movement has even led to the questioning of the institutional structures that promulgate social inequality; structures which underpin a capitalism system which will always produce winners and losers.

But as the developed Western population and governments attempt to address the socio-economic inequalities that have plagued their black populations, we only need to take a step back to reflect on a greater inequality.

The problems in the West are just a microcosm of what has happened to the black populations of sub-Saharan Africa. The world’s 12 poorest countries are all in this part of Africa. According to the latest GDP (gross domestic product) figures, as published in Global Finance magazine, the 12 are Burundi, Central African Republic, Democratic Republic of Congo, Eritrea, Niger, Malawi, Mozambique, Liberia, South Sudan, Sierra Leone, Madagascar and Togo.

So, if you’re looking for major inequality, consider the poverty that is a fact of life across the entire sub-Saharan region, which has a total population of 1,038 billion, three times that of the United States, and more than 27 times that of the US’s black population.

The GDP of the poorest nation – Burundi – is a staggering 98.9 per cent lower than that of the United States.

If black lives truly matter, then Black Nations Matter too. Change must come to the global black population.

Exploitation of Africa has persisted for over 400 years, starting with the slave trade, then colonization, and then the imposition of artificial geographical boundaries, which today still cause ethnic conflict and political instability.

The West exploits Africa’s natural resources and charges high interest rates on any loans. Worse still, vast amounts of money – in excess of $68 billion a year – flow illegally out of Africa to tax havens in the west.

Since 1980, an estimated $1.3 trillion has left Africa to tax havens, according to American research institute Brookings.

Pervasive institutional structures in the West limit the ability of African nations to invest in infrastructure, health, agriculture and education. In francophone African states, governments actually deposit their foreign earnings in French banks, as a ‘colonial tax’. Today France holds over $500 billion in its treasury, allowing African nations access to only 15% of the money in any given year.

These two examples – and there are many more – show that sub-Saharan Africans are benefiting least from their continent’s wealth and resources.

But can the West act to rectify grating inequality? Covid-19 proves that it can if the will is there – and if the lives and livelihoods of their own populations are threatened.

The human loss of life due to Covid-19 and the devastation to Western economies has resulted in governments taking unprecedented steps to shore up their medical and economic support and provide living wages to its populations.

The US government’s response, for example, has been to provide trillions of dollars in aid to maintain a minimum level of socio-economic stability. It has essentially printed money out of thin air, explained the New York Times in an article in April; an action without consequence due to the dominance of the dollar in global markets.

Some 182,000 American people have died from the Coronavirus.

While in no way underplaying this American tragedy, it is worth remembering that in Africa, according to the United Nations, 115 people routinely die every hour from diseases linked to poor sanitation, poor hygiene and contaminated water. That’s more than a million people a year.

A study by the Africa Child Policy Forum has revealed that one in three African children are stunted and hunger accounts for almost half of all child deaths across the continent. More deaths result from their vulnerability to disease as a result of this under-nourishment.

If black lives matter, why does this ongoing humanitarian catastrophe not demand dramatic measures like the West’s Covid-19 response?

Should any sub-Sahara African nation attempt to simply print money to mitigate disaster, that nation would collapse under the burden of debt and currency devaluation.

The usual narrative of corrupt African governments and poor governance masks the root cause; capitalism and neocolonialism.

A suggestion mooted for years is a universal basic wage, a regular payment from the government to every adult to keep their populations above the poverty line.

Pie in the sky? Not in the West. Again, the current coronavirus pandemic has seen Western governments do exactly this, with widespread ‘furlough’-style payments for their non-working populations. Why not in sub-Saharan Africa?

The truth is that the key to improving the socio-economic conditions of black people in Africa also lies in the West.

The rise of the Western world depended on cheap labour and raw materials extracted from the Southern Hemisphere, including Africa, during the colonial period.

And even today, high income nations are reliant on the resources created by cheap labour in Africa and elsewhere, from food and oil to clothing and laptops.

We must end resource and wage exploitation by Western corporations and eradicate tax havens – because black Africa is starving.

A 2019 United Nations report on nutrition in Africa found that 240 million black Africans were exposed to severe food insecurity, with no reliable daily access to a sufficient quantity of food.

There are innovative ideas to eradicate hunger in Africa. In Rwanda, a food project that guarantees set prices for crops from smallholder farmers has helped two million people to avert malnutrition in a year. The project cost $70 million to set up. That’s an annual cost of just $35 per person to avoid starvation.

The Black Lives Matter movement is a timely reminder of racial inequality in the West.

But do black lives matter around the world? It seems not, as long as rich nations continue to exploit black Africa and turn a blind eye to the basic human needs of the black African population. Only by changing the current capitalist driven institutional structures shall we begin to see that black lives truly matter.

A policeman’s knee on the neck killed George Floyd. It could be argued that the West’s knee has been on the neck of black Africa for centuries – and has not yet been removed.