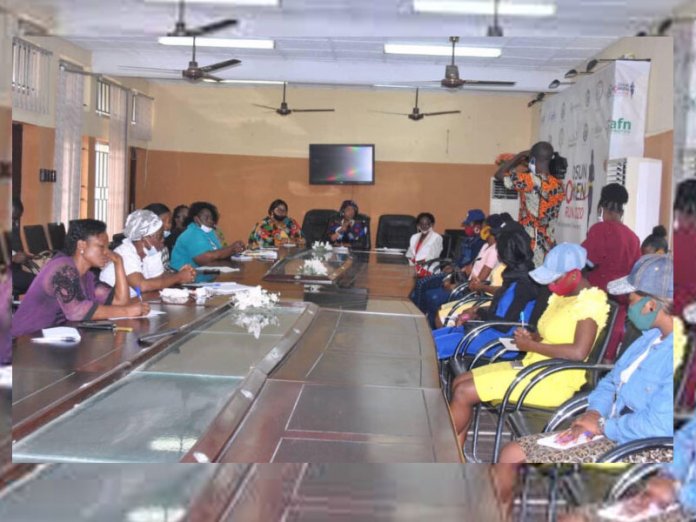 The Osun State Government yesterday received 15 of its citizens, who were trafficked in Lebanon.

The returnees were formally received on behalf of the state government by the Commissioner for Women, Children and Social Affairs, Mrs. Olubukola Olaboopo, and the Senior Special Assistant to the Governor on Diaspora Matters, Mrs. Titi Fadahunsi-Ajayi.

Addressing them during the reception, Olaboopo expressed delight that the ladies had returned alive from Lebanon.

She said the state government had put necessary measures in place for their reintegration into their communities as well as the state.

According to her, “I welcome our ladies back to the state of Omoluabi. You are safe in the state, and the government will do all that it can to ensure that you have a good life going forward.

“There is no harm in trying. The fact that you went abroad to hustle does not mean that you should be stigmatised. We as a state are very proud of you for taking a bold step and trying something new.

“You have had the experience firsthand, and you are going to be the state ambassador on issues of trafficking. The state government expects you to put in diligence in serving your motherland. You have seen the other side of life, and of course, you can see that there is no greener pasture anywhere but home.

“We want to know your qualifications to see how the government can assist you. Besides, we have organised an empowerment programme for you, and your resource persons are on ground to take you through the training.”

Speaking also at the reception, the Senior Special Assistant to the Governor on Diaspora Matters, Mrs. Fadahunsi-Ajayi, commended the state Governor, Adegboyega Oyetola, adding that he felt the pain of a father, which informed his response.

Fadahunsi-Ajayi said: “Sometime in August, a letter came in from the Nigerians in Diaspora Commission to the governor asking for help in evacuating some of our citizens stranded in Lebanon.

“It was a distress call from these ladies, who were going through hell in Lebanon, and had to cry out. They had terrible experiences, which made some of them decide to run away from their masters.

“Immediately the governor got the letter, he released funds that same day. He was so magnanimous of him, as he felt the pains of a father. The process was stalled by the COVID-19 pandemic, but we thank God 15 of them are back and the others will join us later.

“The governor did not only release funds for their tickets, he also approved a token for each of the girls to empower them.”

One of the returnees, Amina Kajobola, thanked the state government and the governor on behalf of the girls, adding that the governor was the reason they were not marooned in Lebanon.

“We are grateful that we called and the governor answered us. If he did not respond, there was nothing we could have done about it. The state government stayed in touch with us until we returned home,” she stated.