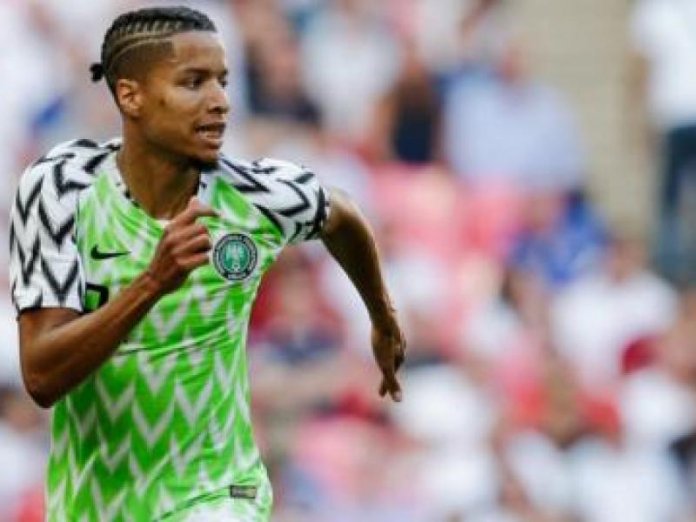 Nigeria’s Super Eagles defender Tyronne Ebuehi has insisted he is raring to go following his recovery from a ‘difficult’ knee injury.

Netherlands-born Ebuehi has not played first team football since he ruptured cruciate knee ligaments in July 2018.

It means he is yet to play for Portugal’s Benfica,who he joined from Dutch club ADO Den Haag after the World Cup in Russia.

The 24-year-old has returned to the Netherlands on loan to FC Twente, who won the Eredivisie title in 2010.

“It’s been a long period out and a hard time for me,” an emotional Ebuehi told BBC Sport Africa.

“Of course, questions like ‘could this be the end?’ can pop up from time to time.

“You sometimes hear that with this type of major injuries players never return to the same level they were before the injury.

The injury hit him just as he was trying to settle in a new country after leaving home for the first time in his life.

“It was difficult in the beginning I can’t lie about that,” he admitted.

“To be away from the only country you have ever known, where you’re born and away from your family and friends. You feel alone knowing it was just no longer possible for them to just pass by.”

“It’s changed me a lot. Not only as a player but as a person.

“Away in another country being alone. Sometimes it’s like an unseen tears of frustration because of the mental pain.

“Like I always tell my family and friends now, that I’m thankful to God for this type of hard lessons sometimes in life.

“It really made me aware of lot of things, like how to take care of my body now. How things can happen in football, how to deal with them. I’m thankful for the lessons that God gave me.

“Going forward in my career, I know how to take care of myself and what’s good for me, how to handle any future injuries, hopefully it will not happen.

Ebuehi is now determined to take advantage of his latest chance back in the Netherlands.

“I missed the entire 2018/19 season because of this difficult injury, but I’m happy that I’m fit now and I’m thankful that I am able to play the game that I love again,” he insisted.

“Twente have given me the chance to show that the last two years was an unfortunate bad luck.

“It would be convenient for some people to write me off but others know better.”

Ebuehi admits it would have been difficult for him to overcome his problems had he lacked a tough mental upbringing and family support.

“So once I suffered this injury, it was the same mindset that I retained to enable me get back stronger from my injury.

“Yes, things didn’t go the way they should’ve gone for me, it took a long time.

“But one thing I’ve always been doing this last two years was to keep working hard. That’s how I was raised and taught by my parents.

“From the start of the year I have invested so much in myself to be as fit as possible.

“My family and friends supported me by coming around as much as possible. I’m thankful for having them in my life. This situation makes you appreciate life.

His first season at the club brought some very mixed emotions for Ebuehi because Benfica won the Portuguese league title and he could only sit and watch his team-mates play.

He admitted that it was not easy having to go to the club’s training ground for his rehabilitation and seeing the rest of the squad preparing as usual.

“As a player, you always want to play and train. When you get in the dressing room, you greet other players but unable to join them,” he explained.

” It was hard for me because I wanted to be a part of the first team action desperately.

“Most of the rehabilitation was done in Portugal to enable the club monitor my recovery. Naturally, the club keeps a close eye on you when you are dealing with something like this.

“You go to the club for rehab but no one to talk to when you return home. But luckily my family and friends popped in sometimes so that helped.”

One of his hardest moments came in May last year as Benfica won a 37th league title, with Ebuehi cutting a forlorn figure in the dressing room as the players around him celebrated.

Cold and emotionless as teammates Haris Seferovic, Joao Felix and Rafa Silva celebrated wildly by popping champagne next to him, the Nigerian admitted that he was a poor spectator.

“I didn’t play an official game. Of course, I was happy for my teammates and also for the club for winning the title. But it didn’t really feel like I also won the title,” he reflected.

“I was there but I didn’t feel like part of anything. It’s pointless to celebrate or fake it like I’ve done something when in reality I would’ve loved to contribute.”

Things improved slightly last season for Ebuehi as he finally got to play some football but was restricted to seven appearances for Benfica’s B team and the same number for the under-23’s.

But he then suffered another setback as a muscle injury dented his hopes of making an international comebackand he was forced to endure another frustrating spell on the sidelines.

His club frustrations were mirrored at international level.

With Nigeria struggling to fill a decade-long troubled right-back position, the Super Eagles finished third on their return to the Africa Cup of Nations in the summer of 2019 in Egypt.

Gernot Rohr’s young side fell agonisingly short in the semi-finals against eventual winners Algeria and Ebuehi said he passionately followed the crushing heartache in North Africa.

“I saw every game. It wasn’t easy for me. I always wanted to be with the team and play in my first Nations Cup,” he said.

“For me international breaks is always special, the friendships I’ve made and formed with the coaching and backroom staff, teammates and everyone in Nigeria.

“I was very proud. I miss that a lot but life is life. I was happy to see them play the way they did, unfortunately we didn’t win but I know better days will come for us and more success. I cannot wait to be a part of the team again.

“Of course teammates, the coach, the staff and even the fans were in touch. I spoke with a lot of my teammates.

“William Troost-Ekong is like a big brother who never stopped giving me the necessary support. They’ve all been incredibly nice to me and I appreciate that.

“I can’t thank the Nigerian fans enough. I don’t check my social media messages everyday but once in a while I do and I see some amazing and incredible messages.

“So many people praying and wishing me well despite being away for two years. I will continue to be grateful for the support I get.”

Ebuehi remains philosophical about what he has been through over the last two years.

“The last two years has shown me that everything happens for a reason in life,” he insisted.

“This big injury and difficulty with my rehab – I think it’s a big test and God wanted to show how strong I am. I think I’ve passed that test.

“I have never invested so much of myself in training like I have done this past five months. I was always the one who wanted to do more than others. Honestly, this year I’ve done everything I could to be as much as I can.

“I’m thankful for the opportunity and the chance with Twente to show myself again and the player I am now. I believe I am a stronger, more physical and better player than I was before the injury.

“I don’t like to talk too much, I want my feet to do the talking.

“This year is an opportunity to show that the last two years was just bad luck and no more injury will come. I know all the other things will follow and come naturally with hard work.”