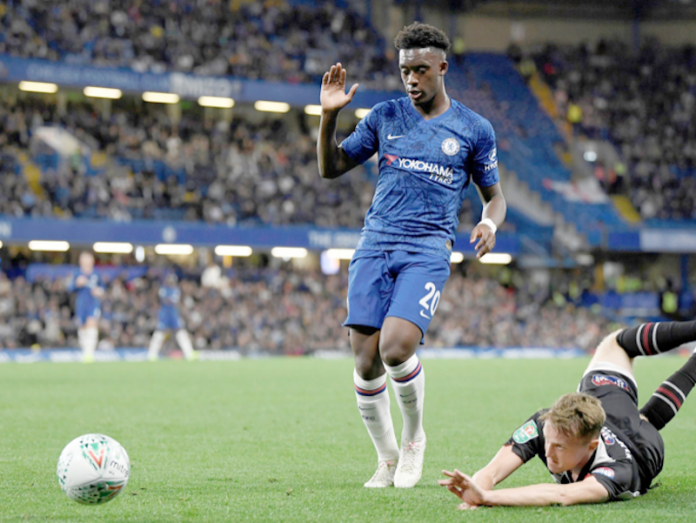 After several attempts to make it to the Chelsea first team in spite of having frequently trained with them, England-born Nigerian Faustino Anjorin has stated that he was prepared to stay at Chelsea and challenge for a spot in the first team in the 2020-2021 season

Faustino Anjorin said he would leave Stamford Bridge only on one condition – unless he gets a loan offer that’s too good to refuse.

The 18-year-old is one of the Chelsea Academy products with a huge reputation and believes he has the talent to earn first-team minutes.

However, the highly-rated teenager is aware he has a battle on his hands to force his way into manager Frank Lampard’s first-team plans.

Although Anjorin frequently trains with Chelsea’s first team, the last time he featured in a matchday squad was on March 8, coming off the bench for the last 19 minutes of a 4-0 win vs Everton in the Premier League.

Chelsea have bolstered the squad with the signing of Hakim Ziyech while the arrival of Bayer Leverkusen’s Kai Havertz is imminent, and would push Anjorin down the pecking order of attacking midfielders and wingers, but the Anglo-Nigerian is keen to prove himself despite the complicated situation.

Anjorin signed a new multi-year contract with Chelsea in June 2020, keeping him at the club until the summer of 2025.

England U-19 star is one of the most exciting prospects at the Chelsea Academy, and has already played twice for the first team this season, against Grimsby Town in the League Cup and Everton in the Premier League.

With the professional contract signed by Anjorin in November 2018 expiring in June 2021, the Blues have offered him a new multi-year contract and everything indicates that he will commit his future to the club.

Manchester City have officially watched Anjorin the most in the 2019-2020 season, attending youth team games involving the Anglo-Nigerian teenager.

Manchester United have also scouted the highly-rated youngster tipped for big things, while Liverpool, Arsenal and Norwich City are the other Premier League clubs observing him.

German Bundesliga club Borussia Dortmund are keeping close tabs on Anjorin too and one of their scouts ran the rule over the versatile midfielder before the Coronavirus outbreak.

He has played nonstop at Chelsea since officially joining the club at U-9 level.

Anjorin made his professional debut for Chelsea in their League Cup win versus Grimsby Town last September and was on the bench in the recent Emirates FA Cup win against Liverpool.

Chelsea midfielder, Anjorin made history for Premier League Club, Chelsea as he came on in the 7-1 thrashing of Grimsby Town in the Carabao Cup.

Aged 17 years, 10 months and two days, Anjorin became the youngest player of Nigerian descent to debut for Chelsea in a UK football competition, breaking the record previously held by Fikayo Tomori (another Nigerian), who was aged 18 years, four months and 26 days when he debuted for Chelsea in the Premier League in May 2016.

Anjorin was given a chance by the club’s new management team, after the teenager enjoyed a blistering start to the season, scoring five goals in his first seven games for Chelsea’s U-23 – including a brace in the EFL Trophy win over Swindon last month.

He is currently, Chelsea’s development group top goalscorer, opening his account in the UEFA Youth League, Premier League 2 and the EFL Trophy.

Lampard, who has made it his mission to promote the youngsters this term has faith in the raw talent, as does his assistant Jody Morris – and the pair have been impressed by Anjorin’s rapid rise since they arrived in the summer.

His progress within the Blues academy has seen him compared to fellow graduate Ruben Liftus-Cheek, who also impressed at youth level.

Anjorin was born in Poole to a Nigerian father and an English mum.

He was named after the Colombian legend Faustino Asprilla who famously became the first player to score a hat-trick against Barcelona in the Champions League when he was playing up front for Newcastle.

By the age of seven Anjorin was scouted by Chelsea and invited to train in their youth set-up before officially joining at the age of nine.

It was a dream come true for the boy, who idolised John Obi Mikel and wanted to play for the same club.

He has played for England at every junior level up to the U-19’s, but without a full cap to his name there could be a tussle with Nigeria for his services in the future.

Technically he’s underrated, despite his lanky frame, runs with the ball at pace and is strong in possession.

And he’s got decent vision, often able to pick out the perfect pass for a forward to run on to.

But it is his finishing that helps him stand out from the crowd.

In fact, Jody Morris once revealed he was the “best finisher at the club.”

Born in Poole on the South coast of England, Faustino Anjorin has a Nigerian father and English mom and can choose to play for either the three-time African champions or the Three Lions.

An England U-18 international, Anjorin has made a big impact for Chelsea’s youth team this season, with the highlight being a seven-game scoring run, and was rewarded with a three-year professional deal in November 2018, shortly after he turned 17.

Faustino has been utilised in the youth setup and has also debuted for Chelsea’s U-23 team as he is highly rated.

The youngster who has represented England at U-16, U-17 and the U-18 level is still eligible to play for the Super Eagles of Nigeria due to his parents and he has not played for the English senior set up.