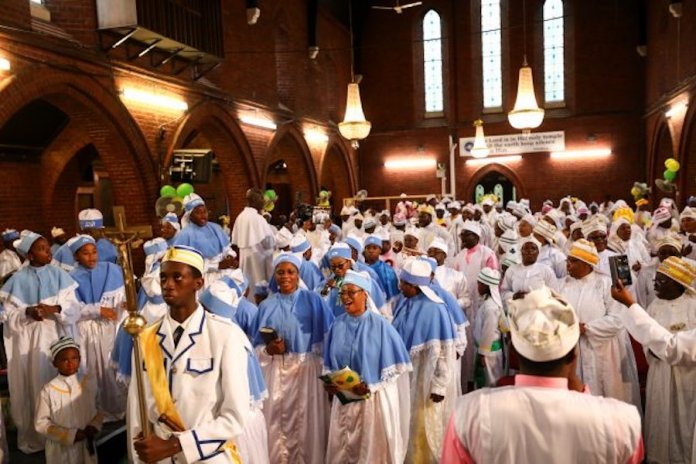 In recent weeks, I have published a series of essays on Christianity and its historical trajectory. From its humble and tortured beginning in Asia, Christianity has risen to become a universal religion, with the world’s most statistically significant followers. Indeed, the emergence of Christianity in world history has been definitive in so many ways. It has shaped the global consciousness and many cultural practices. All across the world, Christianity has transformed a people’s understanding of themselves and of their cultures. Wars have been fought in the name of Christian faith, kingdoms have been built, alliances have been secured. From Handel to Michelangelo, and from the gothic building to the English common law, Christianity has become the common denominator in the way the global world has been built and fashioned.

It is in this recognition of the world-historical significance of Christianity, and especially its confrontation and engagements with non-Christian cultures and religions, that led to my inquiry about its African dynamics. What is the relationship between the historical emergence of Christianity and the African continent? What were the specific historical issues that led to the arrival of Christianity on the continent? How did Christianity participate in the colonial enterprise? How did Africans respond to the arrival and consolidation of Christianity vis-à-vis their own indigenous religions? All these questions led to my essay, titled “Christianity and the African Indigenous Church.” In that essay, I was fascinated with the question of how the core Christian doctrines—immaculate conception, virgin birth, the birth, crucifixion and resurrection of Jesus—could be accepted by non-Christian contexts like Africa. I cited the popular scriptural case of the Egyptian eunuch who got converted by Philip the evangelist in Acts chapter 8. And more than this, I cited the example of an archaeological excavation of a 4th century Ethiopian church which demonstrated the complex mixture of Christian and indigenous Ethiopian beliefs that led to the formation of Christianity in Ethiopian, and marked the emergence of a unique African understanding of Christianity. And finally, I analyzed the establishment, in 1901, of the African Church in Nigeria, under the leadership of Joseph Kehinde Coker, often now regarded as the father of the indigenous church in Africa.

My humble effort at charting the historical trajectory of Christianity in Africa led to some serious reactions from many platforms to which the essay was posted. This tells me immediately that the issue of religion is not just a mere spiritual exercise. Religion has remained for a long time an ideological and intellectual object of discourse. From Karl Marx to Cheikh Anta Diop, scholars have been concerned with how religion facilitate oppression or how it could be harnessed as a tool for social change. Christianity is particularly a point of resentment because of its collaboration with the trans-Atlantic slave trade and the racist colonial project. It is therefore to be expected that when African scholars come to any discussion about the dynamics of Christianity in Africa, rage and sentiment must always come into play. This is to be expected. The range of reactions to my essay was as seminal as they were significantly historical. My attention was drawn to many angles of arguments and historical issues that space could not have allowed me to attend to, except I have made up my mind to write a book on the intersection between Christianity and the African continent. In this short space, I will briefly outline some of the critical points raised to further push my argument about the historical and universal significance of Christianity.

As one would expect, Christianity is always in the eye of the storm, from the ideological to the intellectual. The most fundamental of the reactions to my essay were arrayed along these two areas. At the ideological level, there are two strands of debate that attend the incursion of Christianity into the African continent and the dynamics of the formation of African Christianity. Let me briefly elaborate. On the one hand, Afrocentric and African scholars of religion and culture have been at pain to iterate that the foundation of colonialism was laid by Christian missionaries. David Livingstone said specifically about his mission in Africa, “I go back to Africa to make an open path for commerce and Christianity.” And this charge is further aggravated by the impunity with which Christianity undermined the primal religions of Africa. One requires a long and elaborate but complex response to this Afrocentric charge against Christianity. But a short one that space will permit is that one must at all times be willing to dissociate the essence of Christianity from its ugly misuse by ideological forces. Once we are able to achieve this irreducible core of the Christian message, then it becomes easy to see how Christianity can be seen as being mutually exclusive from the horrors of colonialism and the denigration of the humanities of non-Europeans.

On the other hand, the issues about the formative dynamics of African Christianity are those I have hinted at in earlier articles. One of the responders was unequivocal: “The real spiritual and theological foundations of the Church were laid by Africans.” This is an appealing statement, but it is only partially true in terms of its historical basis. It is already a solid historical fact that the ecclesiological and theological basis of Christianity owe much to the works of the church fathers, most of whom were Africans. We have such famous names like St. Augustine of Hippo, Origen, Tertullian, Clement, Cyprian, Athanasius, Cyril, etc. all these were basically from Alexandria which played a definitive role in the founding of Christianity. However, Christianity also owes so much to other non-African church fathers, from John of Damascus, St. Thomas Aquinas, St. Jerome down to Ephrem the Syrian, Aphrahat, Isaac of Antioch, Irenaeus of Lyon, Justin Martyr, and so many more. It therefore becomes needless to talk about the “real” spiritual and theological foundations being laid by the African church fathers when they all worked over a continuum to consolidate Christian doctrines.

The second significant issue with Christianity is intellectual. I got critical responders who took issue with my essay based on Edward Gibbon’s premise against Christianity as the sole cause of the fall of the Roman Empire. This is a critical issue because there is so much to admire in Gibbon and his The History of the Decline and Fall of the Roman Empire (six volumes, 1776-1788). There is also so much that is intellectually discordant and unfounded. But again, Gibbon’s theses and arguments must be put in thorough perspectives (which space will still not permit me to elaborate). First, it becomes necessary to dispel the notion that Gibbon was an atheist. Such a claim is easy to make since even his contemporaries were confused as to what religious views he professed. From his Protestant background, his conversion to Catholicism and his reconversion back to Protestantism, as well as his constant engagement with religious views, Gibbon was sufficiently intelligent to understand the fundamental role that religion played in the molding of historical dynamics. And more specifically, he appreciated the more specific foundation that Christianity assisted in laying for human civilization. And this is the reason why, in chapter 38 of the study, Gibbon stated: “As the happiness of a future life is the great object of religion, we may hear without surprise or scandal, that the introduction or at least the abuse, of Christianity had some influence on the decline and fall of the Roman empire.”

This statement reveals a lot. First, Gibbon recognized the possibility of the distortion of Christianity in its search for the “happiness of a future life.” And anyone conversant with the great Roman Empire is therefore aware of its historic debauchery and religious complacence. When Constantine the Great, the Roman Emperor, eventually declared Christianity as the official religion of the republic, the downward trend became accelerated. But much more important in Gibbon’s statement is the methodological allowance that the phrase “some influence” connotes in the assessment of the factors that led to the decline of the Roman Empire. This tells us that someone of the breath of intellect of Gibbon could not have made the methodological mistake of adducing a monocausal reason for the decline and fall of such an entity as an empire, and the Roman Empire for that matter. Rome was bedeviled by both internal and external dynamics and predicaments that ate at its foundation. For instance, the “barbarians” outside Rome’s gate were constantly on its heel. And the politics of intrigues and calumny within was sufficient to weaken the empire for her enemies to triumph.

Lastly, once we critically consider the theological effluence of Pentecostal Christianity, and especially its theology of prosperity, we might be tempted to hail the prophetic analysis of Gibbon and his critique of the distortion of Christianity and the values of hard-work, thrift, personal merit and other values and virtues that are core to the Christian faith. Indeed, Gibbon’s criticism was leveled not only at the tendency to devote enormous wealth to the church rather than to secular progress, but also essentially to the fetish about the miraculous. Gibbon’s rationalism was determined to treat Christianity and any religion as a legitimate aspect of general history rather than as a supernatural phenomenon with a final say on human affairs.

My point is simple, and in this I also agree with my responders: Christianity remains a fundamental force in human history. And in this, we are both in agreement with Gibbon’s readiness to read Christianity as general history. The march of Christianity has done a lot to affect the ways we see ourselves and the destiny of the world.