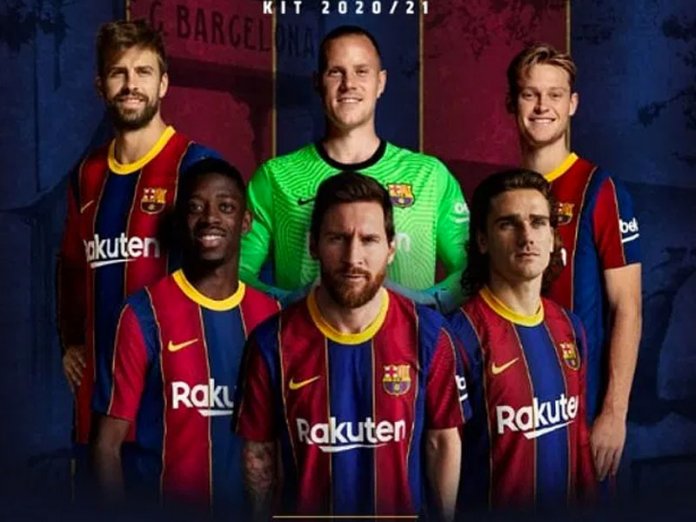 Angry Barcelona supporters have slammed the club for using an image of Lionel Messi to sell their new home kit – just hours before the player’s father meets with President Josep Bartomeu to discuss his son’s exit this summer.

According to UK’s Daily Mail, in what appears to be a calculated move, the Barcelona board members are hoping to show that the 33-year-old still has a future at the Nou Camp ahead of talks with Messi’s father Jorge.

However, the advert has caused backlash from fans on social media with many claiming that the Barcelona are wrong to include Messi in any shape or form, considering he will most likely leave the club in the coming weeks.

Many hit out at the club for holding Messi hostage, after the player himself sensationally handed a transfer request to force through a move to Manchester City.

One fan demanded the club to stop using pictures of Messi to help sell their merchandise, saying: “Stop advertising the jersey with Messi, just let him go, the man deserves this much.”

Others branded the club as ‘shameless’ for trying to capitalise on the financial gain of still having Messi on their books.

With Messi set to leave, one Twitter user insisted that the club had advertised the 2020-21 home kit on false pretenses, saying: “False advertising. Messi doesn’t come with the kit anymore.”

Another pointed out how the talismanic forward isn’t getting the respect he deserves after what he’s done for the club.

The comment read: “Messi deserves same respect as Iniesta, how he was let even when he was in middle of a contract, they should show Messi same respect he deserves better farewell than this.”

Twitter user @phil_papa then slated the club over keeping Messi, labelling them as a ‘disgrace’.

He said: “You’ve turned this into “Less que un club”. Have some decency, show great players some respect, nurture talent, stop shady transfer deals and find real managers with might and a vision for the club. What you are doing to this institution is an absolute disgrace.”

The kit, which was unveiled in July, was made available to purchase yesterday.

Manchester City are hopeful of bringing Messi to the Premier League, though it would not be financially feasible to get a deal done if Barcelona continue to dig their heels in with the 33-year-old’s release clause set at an eye-watering £629million.

Barcelona insist Messi is still under contract and have urged him to stop pursuing a move away and commit to a new deal.