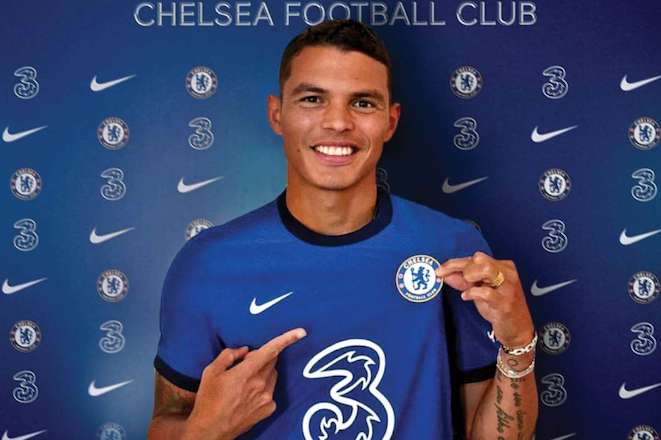 Chelsea defender Thiago Silva is currently on holiday in Italy but is expected to link up with his new teammates in London by the end of the week following his free transfer from Paris Saint-Germain.

Silva left PSG at the end of his contract, ending an eight-year spell in the French capital, and signed a one-year deal with Chelsea last week.

He hasn’t yet started training given his season carried on until the Champions League final on 23 August, although he is looking forward to the new challenge.

“He is on holiday in Italy, he will be in London between now and the end of the week,” the centre back’s agent, Paulo Tonietto, told L’Equipe – via GFFN.

Italy is among the countries that have a ‘travel corridor’ with the UK, meaning that Silva will not have to observe any self-isolation or quarantine on his arrival in London in the coming days. That is a boost to Chelsea, who have recently been struck by six positive coronavirus tests.

Silva has had spells in his native Brazil, Portugal, Russia – where he didn’t actually play – Italy and France during his career to date, with this summer’s Chelsea move representing the 35-year-old’s first foray into the Premier League and English football.

Tonietto is confident that, despite his age, his client will rise to the challenge because he is so focussed, professional and in such good physical shape.

“He is happy to discover the Premier League. We had a lot of offers, but Chelsea are one of the world’s top ten clubs,” the agent explained.

“Physically, Thiago can play for another five or six years at the highest level. He is an athlete who looks after himself. He doesn’t drink, he doesn’t smoke, he doesn’t party. His life is home – work, work – home.”

Chelsea fans will hope the arrival of an eight-time league title winner in Italy and France will boost their leaky defensive ranks after shipping 54 goals in 38 games in 2019/20, more than any other side in the top half of the Premier League.