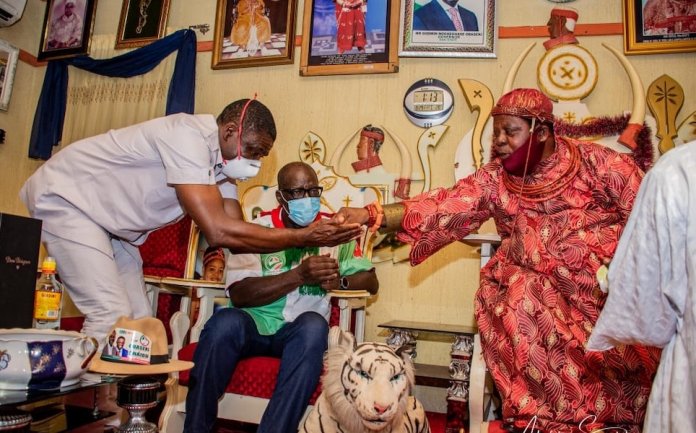 The traditional ruler of Udo Community in Ovia South West Local Government Area of Edo State, Ekhorutomwen Igbinidu, has commended the deputy governor of the state, Comrade Philip Shaibu for not betraying his principal, Governor Godwin Obaseki and the Benin Kingdom.

The monarch who endorsed the reelection of Obaseki, candidate of the Peoples Democratic Party (PDP) for the September 19, 2020 governorship election in Edo State, noted: “This deputy that is following you is my friend. We have been friends for years.

“He (Shaibu) is not a Benin man, but he chose to join the Benin people to liberate Edo State. He has adapted. It shall be well with him. Nothing will be difficult for you. No evil will befall you.

“Let them say whatever they want to say against you, it will not have any effects on you. The ancestors who sent you on errand will make things easy for you. What will be good for the Oba and Edo people and the state is what we stand for. God has done it. The people have approved it.”

The monarch also prayed for the victory of the governor and his deputy in the forthcoming poll, assuring them of unflinching support of the people.

“The institution will train students in the area of farming, extension services and how to utilise technology in farming. To ensure all these campaign promises are fulfilled, I appeal to you to come out en masse on September 19, 2020 to cast your vote for the PDP and stay to defend it.”

He also promised to construct the Iguobazuwa-Udo-Nikorowa Road if re-elected.