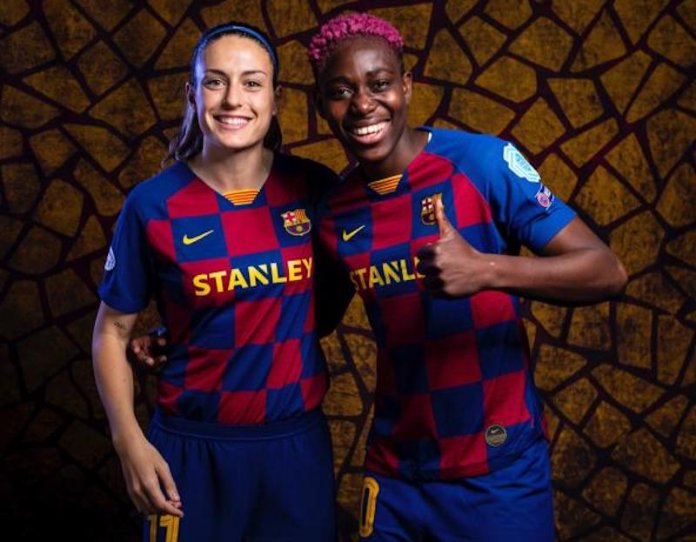 Nigerian international, Asisat Oshoala and her BarcelonaFemeni were eliminated from the Women’s Champions Leaguefollowing Tuesday night’s 1-0 defeat by Wolfsburgat the Anoeta Stadium in San Sebastian.

The Nigeriacaptain was aiming to inspire her side to glory this year after she came off the bench last May against Lyonto become the first African to score in the final of the competition last May.

However, a solitary strike from Fridolina Rolfo sent the German outfit through to the semi-finals as Oshoala and her Spanish side were made to pay dearly for their wastefulness.

Lluis Cortes’ side went into the semi-final on the back of a 1-0 win over Spanish rivals Atletico Madridin a quarter-final knockout contest at San Mames Stadium in Bilbao last Friday.

With Oshoala spearheading the head for Barcelona, they made a bright start as Mariona Caldentey set up the Nigerian to score the opener, but her effort went wide in the eighth minute.

Six minutes later, she had her attempt blocked by the Wolfsburg defence before another glorious chance slipped away after she was played through by Caroline Graham Hansen in the 37th minute.

After the break, Rolfo profited from Svenja Huth’s botched overhead effort to lash in the winner in the 58th minute.

The result means Wolfsburg have maintained their one hundred-percent record over Barcelona, and they advance to face the winner of Wednesday’s semi-final between holders Lyon and French rivals Paris Saint Germain.