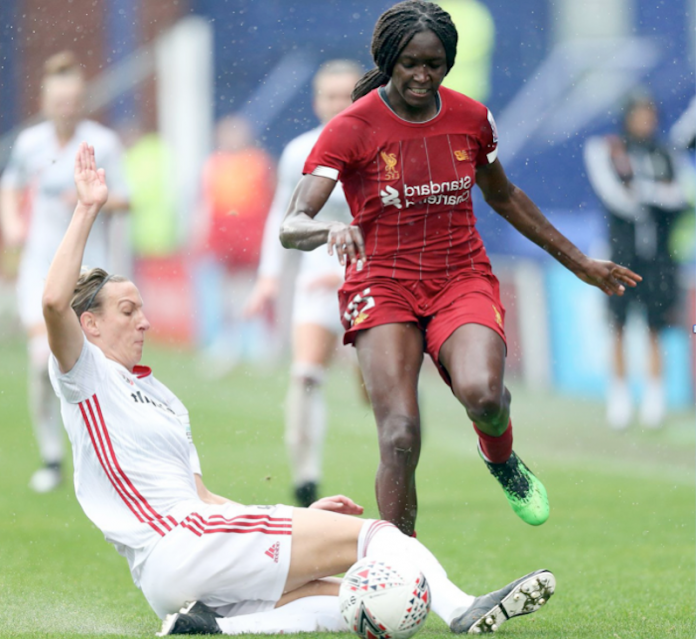 England-born Nigeria Liverpool star, Rinsola Babajide, was last week voted Liverpool FC Women’s 2019-20 Player of the Season. The Reds forward claimed the accolade after coming tops in a combined poll of supporters and members of official former players association- Forever Reds. Beyond personal accolades, returning the team back to the FA Women’s Super League after they were relegated in an inconclusive season due to Coronavirus pandemic is Babajide’s top priority

Rinsola Babajide was Coach Vicky Jepson’s side’s top scorer last season with eight goals in all competitions and recently signed a new contract to remain with LFC Women as they aim to secure an immediate return to the top flight in the coming campaign.

Lawley, who joined the club last summer, finished a narrow second to Babajide in our Player of the Season poll, while Robe came third after her second year on Merseyside.

Babajide signed a fresh contract with the club to extend her stay on Merseyside for at least another season, a rare piece of good news for the Reds at the moment following a raft of other departures and relegation.

With the Women’s Super League season cancelled as a result of the challenges posed by the Coronavirus crisis, it was decided last week that Liverpool would be relegated to the Women’s Championship on a point per game basis.

Having won only one league game all season, despite rarely losing by more than a single goal, Liverpool were bottom of the table with a paltry tally of six points from 14 games. It gave them a worse average than both Birmingham and Bristol City, pushing the 2013 and 2014 back-to-back champions through the trap door into the second tier for 2020/21.

A host of players, including both senior goalkeepers Anke Preuss and Fran Kitching, have confirmed they will be leaving. Veteran Scotland international Christie Murray is also going, as is last season’s top scorer Courtney Sweetman-Kirk. That list could yet grow this summer.

Murray’s statement about her departure revealed plenty about the frustrations that have surrounded the club. Liverpool, have been heavily criticised for the perceived abandonment of their women’s side over the last couple of years, especially at a time when the men’s branch is flying.

Murray expressed that the next chapter of her career would be an opportunity to enter an environment that ‘challenges’ her and to be able to ‘enjoy what I love again’. Reading between the lines, she wasn’t getting that as a Liverpool player and was falling out of love with the game.

Kitching and Sweetman-Kirk both said similar things about the need to be challenged.

Experienced duo Niamh Fahey and Rhiannon Roberts have signed new contracts in recent days, but fans generally will hope that relegation will at least serve as the wake-up call the club needs.

However, Babajide committing her immediate future to Liverpool as a Championship club is a significant boost at what is otherwise a dark time.

From a personal perspective, the 21-year-old said she feels her career with the Reds had been going well and in the right direction and she was keen for that to continue.

“I was so gutted about us getting relegated but now I’ve just washed that aside. I’ve got the emotions out of it and we just need to accept we’re now in the Championship and I’m ready to fight for the team to get promoted to the WSL,” Babajide told Liverpool’s official website.
“We have to use the frustration and anger in a positive way to help us with the fight for us to come back up. We’re all focused, we’re ready.”

Regardless of whether the club is prepared to invest in its women’s team – something that was the case in the past when many of the best players in England were lining up in the iconic red kit – Liverpool will need players with the hunger of Babajide if their stay in the second tier is to be brief.

It was clear to see from her performances before the season was cancelled that she is a talented player with plenty of potential. Her game lacks consistency for now, but that should come with experience and Babajide has the ability to thrive in the Championship.

Liverpool fans will be praying that she can lead a promotion charge.