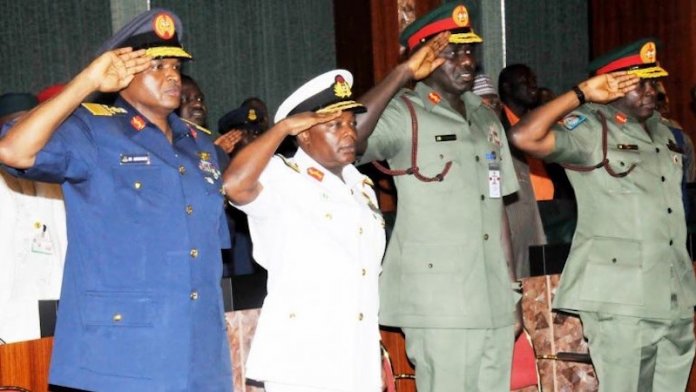 Public Service is a thankless job. The Chief of Defence Staff and Service Chiefs should therefore be comforted by this truism, stay focused and undeterred, in spite of persistent calls, on the President, by various groups in the Country to remove them from office.

Indeed, it must really be traumatising for the Chief of Defence Staff and Service Chiefs expecting their sack while going to their respective offices daily. It effectively sends a wrong signal to the enemies of the State that our military chiefs are undeserving of their offices, thereby rekindling their confidence to re-group, re-strategise, and unleash further mayhem on us. It sends a wrong signal to the Armed Forces regarding the capacity of its chiefs and guardians to provide it with purposeful leadership in a difficult period, such as we are in today. It disturbs its balance and adversely affects its collective well-being. It diminishes the leadership of the military and the institution, as well as the heroic symbol that the Armed Forces of Nigeria represents as an institution of national prestige and pride.

And why do these organised and powerful groups and individuals want the military chiefs sacked? A point has been made about their extended tenure, based on a misconception that their services should have been dispensed with after two or three years in office, like some of their predecessors in office. Another is their perceived inability to conclusively win the war on terrorism, insurgency, banditry-and other forms of security challenges in the country.

These observations are weighty and persuasive. Accordingly, they cannot be waved aside. But are they sufficiently compelling to force the hands of the President to replace his military chiefs prematurely at the beck and call of interest groups within the polity?

My sense says NO. Indeed, a leader who bows to popular pressure to replace his defence and security chiefs without an objective reality of the facts on the ground is considered a weakling. Thankfully, President Muhammadu Buhari is not one of such leaders. He has expressed his confidence, repeatedly, in the Defence and Service Chiefs, although the President feels that they should have done far much more. The discretion to hire and fire the military chiefs lies with the President. The President has said it loud and clear.

You should also READ The President‘s Broadcast Dictates Another Broadcast
Lately, General Alani Akinrinade, a military chief of uncommon pedigree, has also reinforced it. Every Nigerian, therefore, ought to respect the President’s sense of judgment about the performance of the military chiefs, so far, and refrain from exerting undue pressure on him to change them without any just cause. No king occupies a throne for ever except the Sovereign God, the Almighty, wills it. Definitely, the Chief of Defence Staff and Service Chiefs will go at God’s appointed time. But, they ought to be celebrated rather than vilified for what they have accomplished so far.

The Chief of Defence Staff and Service Chiefs are not being celebrated because we are a nation in self-denial that we are at war. Months ago, Senator Ndume said it loud and clear that we were at war. But we have refused to acknowledge this reality that stares us in the face. Perhaps, because we have relative peace in Abuja, Port Harcourt, Lagos, Kano, Sokoto, and most of our cities, while the epicentre of the war – the North East – is far away from many of us. We are at war that we are not adequately prepared for. We are at war in a state of economic meltdown, so the resources for diligently prosecuting the war are not even there for us to harness. We are at war with agents of death who prefer death to life. We are fighting with daemons of religious extremism, perverters of truth and apostles of strange ideologies backed by foreign interests. We are at war with ethnic jingoists and revisionists. And we continue to misjudge the depth and ferocity of the war, as well as the resolve of its backers, to inflict maximum pain and damage on us.

Wars against insurgents and terrorists are not easily won or else the Soviets, British and Americans would have overcome the Taliban in Afghanistan; and Russia and Iran would have imposed peace on Syria long ago. Libya has been in total chaos after Muammar al Gaddafi was removed from office by NATO’s forces, and the major powers have so far failed to impose peace therein. It took 26 years (1983-2009) of decisive military campaign for the Sri Lankan Armed Forces to defeat the Tamil Tigers in Sri Lanka in a war of attrition.

Virtually all nations of the world are combating one form of extremism, militancy and insurgency or the other. We must, therefore, change the narrative and be better organised, and informed that we are not alone in this unpleasant situation. There are no quick fixes in this war.

One other trend that I have observed in the country is the tendency on our part not to appreciate that in all war situations, there are gains and reversals. What is most intriguing, and annoyingly embarrassing, is that our military is often not praised when they make gains on the war front. And the Armed Forces of Nigeria have made massive gains in the North East which are either glossed over or under-reported. On the other hand, every reversal is celebrated with glee in our mass media, with the intention to cause panic and present the military as habitual losers on the war front. How do we continue to motivate the military to face the bullets of the enemy courageously, when we are not loud enough in celebrating the patriotic and sacrificial service of its officers and men or ratings on the war front?

When nations are at war, the citizens unite behind their leaders and their military. There are many actors, and indeed powerful interest groups, within the country that have refused to acknowledge the gains of this Administration in decimating Boko Haram.

So facts are distorted in order to present the Administration as failing in fulfilling its promise to effectively secure the nation. And sometimes, the government of the day panders to the views of the opposition about the security challenge rather than maintain its stance that it is not only winning the war, but also winning it well. And the Ministry of Defence ought to do more in mobilising national intelligence capacity and galvanising national and international efforts to enable the nation prosecute the present war more efficiently, effectively and economically. The Ministry must be structured as a fit-for-purpose vehicle to lead from the front to enable it give efficacy and traction to the strategy and tactics of the Armed Forces for prosecuting the war, and securing the nation from all forms of internal and external threats on a sustainable basis. The Ministry of Defence must be further strengthened to enable it enlist the overwhelming support of the citizenry for prosecuting this war, no matter its complexity and duration.

Urgent reforms must therefore be undertaken in the country to empower the Nigerian Police Force (NPF) to enable it undertake its duties unhindered. In a fair and balanced Federation, the establishment of State Police is proper and legitimate. Accordingly, it is reasonable to tinker with the national architecture of police operations in Nigeria by recognising the need to emplace the State Police as an additional layer of support to Force Headquarters.

You should also READ The finality of the Supreme Court
Maybe worthy of note, also, is the need to further overhaul the governance structure of the Defence and Security sector in the country. I have observed, curiously, that the Defence and Service Chiefs have multiple masters, given the plethora of reporting lines and authority or accountability relationships within the system presently. Serving too many masters, especially without a sense of proper alignment is tasking, hazardous and counterproductive.

In a war context, the Nigerian military needs freedom to act decisively. This does not make the institution less accountable. Spirited efforts must, therefore, be made to reduce the existing layers of bureaucracy and reporting lines for speed of operations with a view to enhancing efficiency.

Divisive policies and actions which tend to further fuel insecurity in the country need to be interrogated and dispensed with. The military must coordinate itself better and work more cooperatively. The smear campaigns against military chiefs in sponsored videos and video clips must be discouraged.

The military is an institution that operates within the boundaries of law and due process. Aggrieved officers and men of the Armed Forces ought to channel their grievances through institutional mechanisms for resolving them. And we must believe in the capacity and commitment of the Armed Forces to act rationally and impartially to deal with all cases before it.

Human rights campaigns must not be pursued relentlessly to cause harm to the synergy and internal workings of the Armed Forces. Boundaries, and red lines, must be established to protect the Armed Forces from implosion and combustion because the larger interest of our beloved nation cannot be served if there is a breakdown in the military institution’s command structure and internal disciplinary process.

We must dignify the Armed Forces of Nigeria by celebrating it. And, eventually when there is need to change its leadership; it must not be undertaken as a market place exercise to cause injury to the institution. Garlands of honour must be given to the present leadership as an inspiration for their successors to continue on the path of rectitude, sound judgment, professionalism, patriotism and sacrificial service.

… Mayomi is a public analyst, commentator and retired civil servant. 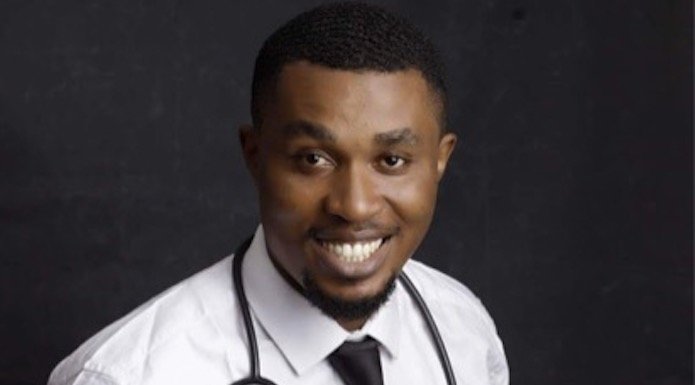