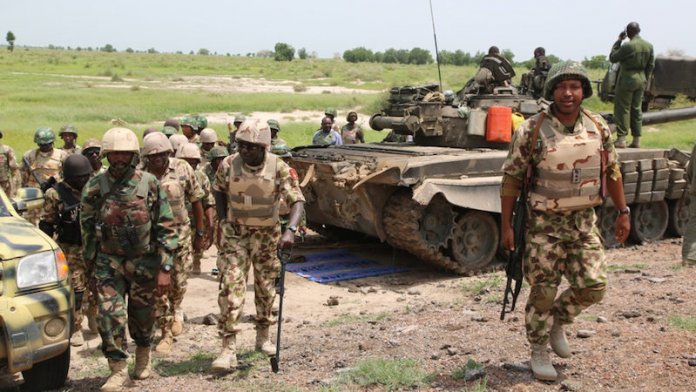 Joint military troops of Operation Whirl Stroke (OPWS) in Benue State last Monday arrested seven persons in connection with the alleged killings of over 13 persons in Ukpogo community of Edikwu district in Apa Local Government Area of the state.

According to OPWS, the suspects were arrested with sophisticated weapons in the area following a credible information obtained from the locals.

The suspected armed militias had on August 10, 2020, invaded the Ukpogo community and killed more than 13 persons leaving several others injured with wanton destruction of houses and other valuable properties following an aged-long chieftaincy dispute in the community.

A source from the area, who survived the bloody attack, said he sighted one of the attackers in the community, and quickly passed the information to the troops who were deployed in the area to maintain peace.

The source, who identified himself as Eko Ngbede, told THISDAY on phone that he was able to identify one of the attackers in the community, who was escaping to Amoke district in Apa LGA.

He said the OPWS troops immediately swung into action and trailed the militant to Amoke, and in the process, arrested five of them with sophisticated weapons.

“It was when these people were arrested that one of them led the troops to their hideout in Ugbokpo town leading to the arrest of two more persons.

“In fact, I am a victim. So I could easily identify one of those who came to launched the attack on us, and I quickly alerted the OPWS members, who were on patrol in the area. They came and condoned the community.

“I want to sincerely thank the troops for their timely intervention. Their presence has brought normalcy to our community because almost the people that fled have returned home,” he said.

When contacted, the Force Commander of OPWS, Maj. Gen. Adeyemi Yekini, said he cannot comment on the arrest of the suspected militias and referred journalists to the Defence Headquarters (DHQ) Information Department.