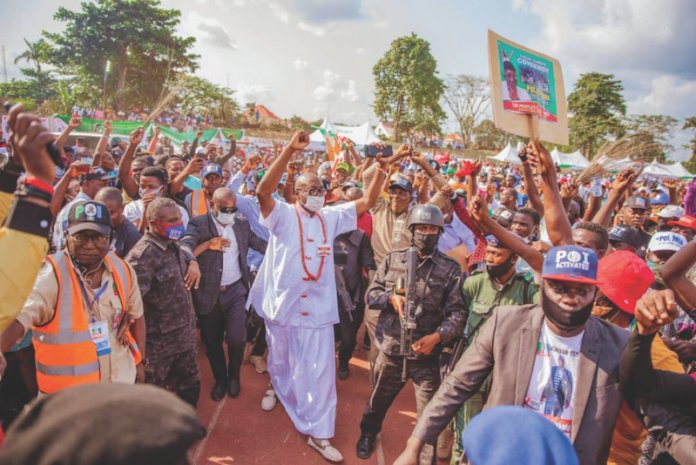 The campaign movement of the All Progressives Congress (APC) governorship candidate in Edo State, Pastor Osagie Ize-Iyamu, has continued to tower over and above many expectations, writes Adibe Emenyonu

The seed of political activism of the candidate of the All Progressives Congress (APC), Pastor Osagie Ize-Iyamu, in the September 19 governorship election did not just begin yesterday. It was planted a long time ago during his university days as a vibrant member of the Students’ Union Congress and being highly instrumental to the election of several presidents and Executive members of the union.

The experience garnered then proved vital later in life as he became one of those that saw to the election of two governors in Edo State: Chief Lucky Nosakhare Igbinedion and Comrade Adams Oshiomhole.
He began with the junior Igbinedion, when he was first Chairman of Oredo Local Government Council, Benin City, in 1987, under the zero party system as Personal Assistant.

After the collapse of the system, he sojourned into private legal practice and business, and later was appointed Chief of Staff, and Secretary to State Government (SSG) again, under the administration of Igbinedion as Governor of Edo State between 1999 and 2007.
These appointments, no doubt, were evidence of the virtues of loyalty and trust as he elevated the two offices to the enviable status of a melting pot of consultation, strategy and confidence building devoid of arrogance, nepotism and discrimination.
With these two positions of responsibility, he became the man to trust and do business with, the rallying point of energies and ideas. Not only that, he became a critical nexus and strategic catalyst in the government of the state, where he proved to be not only reliable, but dependable, trust worthy and a positive generational ambassador committed to the wellbeing of the Edo people.

After the expiration of the administration of Igbinedion as governor, Ize-Iyamu’s interest in politics did not die with it. He became more relevant with the formation of Grace Group, a political pressure group with the slogan ‘No Man Is God”.
It was from this group that the then Action Congress (AC), Action Congress of Nigeria (ACN) sprang up and later, APC with political structure in all the 192 wards, and in the 18 local government areas of Edo State. That same structure midwifed the coming of Adams Oshiomhole as Governor with the coalition of Action Congress and Labour Party.

Like the administration of Igbinedion, Ize-Iyamu played a key role in the Government of Comrade Adams Oshiomhole. Although he did not occupy any key position, he contributed to her political development and stability throughout the period until he left to pursue his political carrier in PDP. Save for the power incumbency, political generosity and sagacity of Oshiomhole, the withdrawal of his structure would have capsised the ship of APC in the 2016 governorship election.
Prior to his departure from APC in 2014, Ize-Iyamu had earned his place as a politician that does not discriminate, highly de-trabalised, open to positive ideas, motivator of progressive agenda for government, a respecter of elders and social values, a nexus of hope for Christians in Government and a crusader of fairness and social justice.

Before his departure, however, he was National Vice-Chairman, South-south of the APC. He was also part of the legal team that drafted the constitution and registration the APC. He is also a former Director General of Oshiomhole’s second term Campaign Organisation.
This remained why his bold foot works in partisan politics and public office in Edo State have been phenomenal in scope, depth and intensity, with the resultant effect of re-designing the political landscape. He has remained the calm and deep-thinking political architect, whose courageous designs have re-engineered the hope of the Edo people for good governance and freedom from democratic tyranny.

No wonder that, today, Osagie Ize-Iyamu is widely respected, acknowledged, and referred to as the “Leader” by both the elderly and the young for his uncommon courage, wisdom, integrity and commitment.
To prove this points, when he decided to contest the governorship election of the state, he came up his SIMPLE agenda – a document he explained, encapsulated the area of focus of his administration if he wins the September 19 election.
According to him, the acronym ‘SIMPLE’ stands for Security, Infrastructure Development, Manpower Development, Public/Private Partnership, Leadership by example and Employment creation.

The governorship candidate also said the agenda, which had been put into a book form, was also a ‘SMART’ document, saying, “By this, I mean it is Specific, Measurable, Achievable, Realistic and of course, Time-bound.”
Ize-Iyamu further explained that he decided to make the document his agenda for the people of the state so that he could be held accountable should he derail from his promises after winning the election.
According to him, a government must be accountable and transparent, and as such, those who want to govern must put what they want to do for the people in black and white.
He added that so much could be done by any government that was focused, committed and dedicated to ensuring a better life for the people of the state.

The APC candidate noted that it was not enough to start a project but to see to its end. “So we are looking at what we can achieve in four years because a governor’s contract in the office is for a period of four years,” he said.
Ize-Iyamu maintained that his motivation for running for the office of the governor of Edo was to make a difference and therefore called for partnership with the media for a change in the narratives.
According to him, the media should be in serious partnership with the government so as to act as checks and balances on the government on behalf of the people.

This SIMPLE agenda already has multiple fans. Peter Esele, former Labour leader, an APC Chieftain and former governorship aspirant, while commending it, stressed the need for the people of the state to believe in Ize-Iyamu’s ‘SIMPLE’ agenda, saying it was about the simplicity that life was all about.
“To solve societal problems, you must come around to look at things the way they ought to be. This is because the fabric of the society is built on simple things of life,” Eseke said.
The former Labour leader urged the media to constantly hold leaders and politicians accountable for promises made during electioneering and their parties’ manifestoes.

Launched in his second attempt against the same man, who defeated him in the 2016 gubernatorial contest, the manifesto has become a singsong in the state, because of its wide acceptance as a working document for anyone serious and desirous of good governance.
Little wonder, when Ize-Iyamu indicated interest to go back to the house he helped to build, his coming back created an upset.
To show the stuff he is made of, and as one, who knows his onions, he has painstakingly driven his agenda anywhere his campaign train berths. Whether in the street corners, village or market square, town forum, local government area, youth organised programmes, visit to traditional rulers and institutions in the state, the SIMPLE agenda manifesto has gained immense acceptance, because of its inclusivity towards development in all the nooks and crannies of the state.

Incidentally, in 2016, alongside former APC national Chairman Adams Oshiomhole, Obaseki defeated Ize-Iyamu to win the 2016 governorship election for the APC. Presently, Ize-Iyamu with Oshiomhole, is going against Obaseki. Added to this is that almost all the noted politicians in the state appear to be behind the Ize-Iyamu movement.
From Urhonigbe to Agenebode, and from Igarra to Iguobazuwa, the message has been the same, respect for the traditional institution and giving them their right of place in governance.

To the youths, messages of hope powered by government empowerment, rural and infrastructure development, security of lives and property not only through adequate engagement of security agencies but also drafting in vigilance group to complement the efforts of the conventional police and others in charge security of lives and property. Women empowerment through rural development and urban renewal is also top on the list.
Pastor Ize-Iyamu told the traditional rulers that his first priority as governor after election would be implementation of the Simple Agenda relative to the issue of insecurity, which has driven many residents from their farmlands in Esan.
He spoke of plans to regard the traditional rulers and give them respect due them besides incorporating them into governance so that their roles as community leaders can be enhanced to secure the lives of the people.

To the youths, he promised them participation and involvement in his plans to create opportunities through the provision of working infrastructure and an enabling environment if elected governor and development of agriculture and agro-business
All this, significantly, has propelled the unusual crowd and personalities seen during each of his Campaigns. For instance, when he took his campaign to Edo Central, apart from his running mate, Mallam Gani Audu and Comrade Adams Oshiomhole, the Federal Commissioner representing Edo in the Federal Character Commission (FCC), Mr. Henry Idahagbon, the Edo Central Campaign Director-general and two-time member, Federal House of Representatives, Mr Patrick Ikhariale, two-time former Commissioner, Chief Frank Okafi Erewele, the strong man of Edo Central politics, Chief Francis Inegbeneki, former Civil Commissioner, Ken Ihensekhien, Mr Abu Momodu among others were present to lend their support.

In Edo North, the list is inexhaustible with personalities like former Deputy Governor, Rev. Peter Obadan; Senator representing Edo North Senatorial District, Senator Francis Alimikhena, the member representing Akoko-Edo Federal Constituency in the House of Representatives and Deputy Majority Leader, Comrade Peter Akpatason, and other leaders of the APC; former Deputy Majority Whip and former two-time member, representing Owan Federal Constituency, Mr. Pally Iriase; Member, representing Etsako Federal Constituency, Johnson Oghuma and several others.
Although large crowds do not necessarily mean commensurate acceptance, but the sea of heads at every of Ize-Iyamu’s campaign outing seems a demonstration of strong followership and supporters, who on September 19 governorship poll, stamp their feet to say we have made a good choice after all.