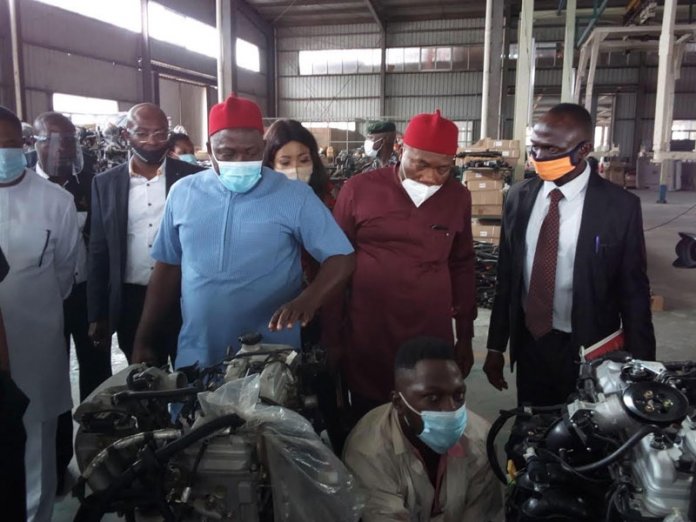 Not a few Nigerians regard the quest to get the nation into the big league of technologically advanced nationsas a tall order or even a pipe dream. But some Nigerians in the nation’s industrial sector have taken it upon themselves to make this dream a reality. They have been deeply involved in development of homegrown or local technology and industrialisation.

Encouragement of these firms engaged in home grown technology by using their products is not always forthcoming as the appetite for foreign goods has remained high. Most times, it is government that is expected to lead the way in patronising local producers while firms in the private sector look the other way and continue to patronise foreign manufacturers to the detriment of indigenous companies that produce similar goods.

However an indigenous engineering and construction firm in the oil and gas sector has broken ranks and initiated a drive to promote local content development.

Oilserv Limited has taken it upon itself to use locally manufactured vehicles in its operations. To this end, the management has entered into a partnership with Nigeria’s first indigenous vehicle manufacturing firm, Innoson Vehicle Manufacturing Company, located at Nnewi in Anambra State.

Chairman of Oilserv, Engineer Emeka Okwuosa said his firm has absolute confidence in the ability of Innoson to drive local content development hence the need to support the firm. He said Oilserv, which builds pipelines in Nigeria and other parts of Africa has already placed order worth N600 million for the supply of various types of vehicles produced by Innoson.

“We see IVM as a company that not only talks the talk but also does the work,” he said, adding that by engaging in actual manufacturing of vehicles and not assembling, Innoson vehicles have the advantage of being adapted to the needs of Nigeria.

To see things for himself, the Oilserv boss led some executives of his firm on a visit to IVM at Nnewi, the rapidly growing industrial hub in the South-east. The august visitors, who incidentally came to IVM plant on August 3, 2020, were received by the Founder/CEO of IVM, Chief Innocent Chukwuma. He happily conducted the Oilserv delegation round the production line of the vehicle manufacturing firm.

Inside the factory, the engineers and technicians were busy likebees building different models of IVM vehicles. In fact, Okwuosa was pleased seeing that some of the customised vehicles ordered by his firm were among the ones at the production line. He said that having observed how vehicles were being built from the scratch at the production line of IVM there was no reason to doubt Nigeria’s capability of being self sufficient in the production of vehicles easily adapted to the local needs and environment.

According to him, having seen the production processes of IVM he was proud to “let the world know that IVM is very effective in fulfilling Nigeria’s local content development of which Oilserv is at the heart of it”.

He explained that his firm was basically partnering IVM in the conceptualisation, manufacturing and use of locally made vehicles for oil and gas purposes.

The facility tour also encouraged the Oilserv team to have strong faith in the quality of vehicles being produced by Innoson. The driving force behind the patronage is the fact that the local vehicles from Innoson stable mets the quality standard required by Oilserv, hence there was no need spending scarce foreign exchange on imported vehicles to the detriment of the local vehicle manufacturer, who is doing the nation proud.

This feeling of excitement and satisfaction was also expressed by the Group Finance Officer of Oilserv, Mr. Solomon Okodugha, who was part of the delegation. “I feel proud of what is happening here,” he enthused, adding that Nigerians are the direct beneficiaries because Innoson is an indigenous motor manufacturing firm and its workers are Nigerians.

Engineer Okwuosa encouraged other indigenous firms to toe the line of his firm by patronising made in Nigeria products. His faith in local products is so strong to make him declare that if he had the power he “will make sure a law is passed that would make it mandatory that all vehicles used in Nigeria for mostly oil and gas industry should be made in Nigeria”.

By fully embracing Innoson and its products Oilserv is blazing a trail in the private sector, which is largely noncommittal in patronising locally made goods, especially vehicles. As yet, no other firms both indigenous and non indigenous has taken this bold step to promote local content development the way Oilserv has done.

Presently it’s mainly federal and very few state governments that have recognised the need to patronise Innoson and add the locally manufactured vehicles into their official fleets. If indigenous firms are skeptical about patronising IVM it is misplaced doubt as Oilserv has not only tested the IVM vehicles and confirmed the high quality of the products but also demonstrated enough patriotism by believing in Nigeria made vehicles.

Chief Innocent Chukwuma disclosed that 90 per cent of vehicles in Oilserv fleet are IVM vehicles of various models. He lauded the boldness of Oilserv chairman in patronising Nigerian made vehicles, saying that “it shows that he has Nigeria in mind and helping to develop the country”.

Both Oilserv and IVM recognise that their partnership goes beyond economic benefits as the overall goal is to enhance local content development in Nigeria’s industrialisation efforts. Chief Chukwuma further stated that the partnership with the engineering firm was helping his own firm to keep making improvements on its vehicles.

“They (Oilserv) have a lot of experience, so partnering with them is good enough for us because when they give us what they want, we’re learning from them since they are engineering company,” the indigenous vehicle maker said.

On his part, Okwuosa stated that by partnering with IVM, it makes it easier for Oilserv to adapt its choice of vehicles to meet specific needs in its oil sector operations. He said that part of the advantage is that spare parts of IVM vehicles are easily available and the production process of Innoson is flexible enough to accommodate its specifications at any given time.

He further noted that the partnership would make it possible for Oilserv to be in a position to grow the local industry and build local capacity. “It will be an example to others, to any other industries to understand that bringing up Nigerian brands, developing of local capacity is the best way forward,” he asserted.

According to Okwuosa, not only vehicle manufacturing firms need encouragement; various other industries equally need encouragement in order to build up local capacity in production of goods beingpresently imported into the country.

The Oilserv General Manager, Operations and Technology, Mr. Chigozie Obi was optimistic that the partnership was a mutually beneficial one. He assured that Innoson “would be able to customise the vehicles to our specific need which foreign companies cannot do”.

After taking his high profile visitors through the production process of IVM, Chukwuma also proudly showcased the finished products, an array of various vehicle models including jeeps, SUVs, patrol vans, saloons, and ambulances, among others.

He said his vehicles are truly locally manufactured given that 60 per cent of components are sourced locally with only some engines and electrical parts constituting the imported components, which is not unusual as with auto makers in other countries. The IVM boss said that with this achievement he has started to proudly affix “made in Nigeria” engravings on IVM vehicles.

Indeed it was this conviction that IVM vehicles are truly indigenous that contributed to ignite the interest of the Oilserv boss, who is very passionate about developing of Nigeria’s local content capacity. He said that his firm was already engaged in it across its areas of operations and it would soon be extended to the northern part of the country.

The seasoned engineer, administrator and entrepreneur, who controls the entire conglomerate of the Oilserv Group, did not lose sight of the fact that a lot still needed to be done before Nigeria could hit the expected target of building indigenous technology and industrial base that can compete at the international stage.

To Okwuosa, “local content development is still a work in progress”. He said that the partnership with IVM represents a good example of what should be done to speed up the process of developing Nigeria’s local content. “We have to continue to develop this and make sure that Nigerians know that it is workable,” he said, insisting that “we should patronise Nigerian products”.

The Oilserv boss advocates for a holistic development of local capacity, not just in terms of industrial productions but also infrastructure and human capacity development “which starts from education all the way to various trainings”.

“If we do this religiously over a period of time in a well structured manner, I believe Nigeria will develop. We have people in Nigeria that are capable and working,”he said.