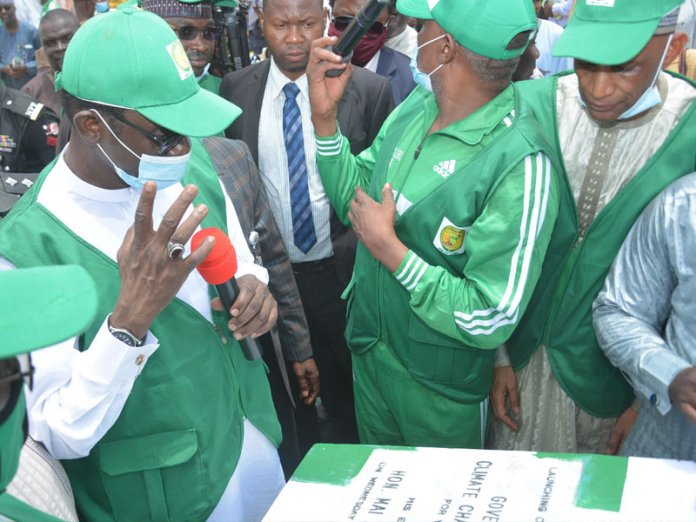 The launch of the Governor Mai Mala Buni Climate Change Action Plan last week by the Yobe State government was a show of commitment in tackling the challenges confronting the environment, writes Rebecca Ejifoma

A few years ago, when scholars and researchers in the country working on social change predicted that the North-east region would be impacted significantly as global warming causes serious climatic changes, Yobe State was a focus because of a particular belief that it is the “hottest” of the six states in the zone.

The state’s natural challenges include drought and desertification, which are made worse by artificial ones – bush-burning, deforestation, over-grazing and, recently, the Boko Haram insurgency. Through their relentless campaign of violence, Boko Haram terrorists have displaced thousands of people from their original communities, thereby whittling their capacity to engage in farming and to tend to the environment.

Since 1991 when Yobe State was carved out of the old Borno State by the General Ibrahim Babangida regime, successive governments tried, almost to no avail, to address various climate change-related challenges ravaging the state.

However, the present administration of Governor Mai Mala Buni has taken the bull by the horn, by confronting all the challenges frontally and summoning the courage to revamp and resuscitate the effort to address desertification.

Most notably, the Yobe State Government through the Ministry of Environment recently launched the Governor Buni Climate Change Action Plan as a blueprint to turn the vast swathe of the desert-prone part of the state, comprising some eight of the 17 local government areas of the state, into a green environment by planting over three million trees across the 17 local government areas in the first instance. The goal is to have 20 million over four years.

According to environmental expert, Ula David, “what Governor Buni is doing in the area of making the environment green should be emulated by all governors in the North-east. In fact, all governors across the 36 states of the federation should take such a bold step. By so doing, all our trees which have fallen will be replaced and it will reduce deforestation and drought in many regions during the dry season.”

The governor had, while formally launching the 2020 Tree Planting Campaign and the Buni Climate Change Action Plan for Yobe at the Dusuwa Forest Reserve, lamented indiscriminate felling of trees which, he noted, had resulted in the “present situation where there is prevalence of flood, desertification, wild windstorm, low density rainfall, and low agricultural yields etc.”

He stated that as this year’s rainy season began, it was imperative that the state government kick-started its new innovative environment drive to raise over 20 million assorted tree seedlings over the next four years. He expressed the belief that this would provide the much-needed impetus for land restoration and increase vegetation cover in the state.

Buni described this year’s theme – Plant a Tree for Better Tomorrow – as apt “if we take into consideration the precarious situation of our forest land”.

The governor observed that “it is disheartening to note that credible international sources (European Union and the United Nation Food and Agriculture Organisation) have classified Yobe among the states in the country with high deforestation rate in the world where from 1990 – 2010, 50 per cent of our tree cover were felled.

“This situation, if allowed to continue, will not augur well for our state in particular and the nation at large,” he said, adding, “our forefathers bequeathed to us a good and sound environment with thick vegetation cover, but over the years, we depleted the environment through illegal felling of trees thereby degrading it to its present situation where there is prevalence of flood, desertification, wild windstorm, low density rainfall, low agricultural yields etc.

“In order to address this situation, this administration evolves some sound measures, which ultimately creates awareness, participation, and involvement of all Yobeans to own the programme.

“Consequently, the state government raised three million assorted tree seedlings through the Ministry of Environment for this planting season”,

To ensure action across the local government areas in the state, the governor has also established Environment and Sanitation Committees with a view to monitoring and enforcing the environment and forestry laws of the state.

He also disclosed that the state government is currently reviewing the Environmental and Forestry Laws to bring them up to date with current realities. He charged all the traditional rulers to strictly ensure the protection of the environment.

Buni was clear in his warning that there should be no more illegal felling of living trees in Yobe State, adding that anybody found guilty will be prosecuted.

He said: “Henceforth all our gazetted forest reserves are sacrosanct. No official be it from the local government or the emirate councils are allowed to allocate, sell, or lease any portion of these reserves.”

To give more teeth to the effort to plant trees and save the environment, the governor has declared every July 29 a work-free day for tree planting in the state with effect from the year 2021.

The state’s Commissioner for Environment, Sidi Yakubu Karasuwa, who said that the Buni Climate Action Plan was introduced to restore the state’s forest land for improved community livelihood programme, said that to implement the Climate Change initiative, ambassadors were appointed, including members of the State Executive Council, members of the National Assembly from the state, members of the state House of Assembly, Special Advisers and Senior Special Assistants to the governor, heads of agencies, parastatals and extra ministerial departments, traditional rulers and directors of personnel managing the 17 local government councils.

Karasuwa added that 50 youth ambassadors in each of the 17 local government areas who will spread the Governor Buni Climate Change Action Plan across the state were also nominated. The commissioner said the youths will work to ensure the success of the initiative and become beneficiaries and owners of the project for its sustainability for the long haul.

The Action Plan will also carry schools along so that students and pupils are encouraged to develop a culture of care for the environment.

“Governor Buni Climate Change Action Plan for Schools proposes the introduction of environmental issues in school curriculum at the central level. Another important component of this campaign is the role our traditional rulers, local government councils, tertiary institutions, and the basic and secondary schools will play particularly, in the area of planting and nurturing of the seedlings,” he said.

The ministry also proposes competition among schools on tree planting and nurturing and aim to ensure that the governor personally presents an award to the best schools in environmental effort.

On distribution and planting, the state government plans to plant 100 hectares of Gum Arabic and other assorted trees in each of the three senatorial districts while five selected primary schools in each of the seventeen local government areas are to establish one hectare plantation/orchard.

Ten selected secondary schools under Teaching Services Board will establish one hectare plantation each, another five selected secondary schools under Science and Technical Education Board are to establish one hectare plantation each; even thousand assorted seedlings are to be provided to the 14 Emirate councils, 10 higher institutions in the state are to be given 100,000 assorted seedlings for school plantation and premises planting.

Other plans include Trans-Sahara road 40km roadside plantation, 200,000; afforestation project (for establishment of road side plantation along Gujba road and other types of planting), 200,000; NEAZDP (for planting and distribution to their contact farmers), 200,000; general public for household and street planting, 1,000,000; other interested agro forestry farmers, 72,000.

Karasuwa said in order to actualise this project, the ministry proposed the rehabilitation of the state’s dormant nurseries at Potiskum, Damagum, Yusufari Garanda and Warsala.

He said the governor had similarly approved the re-survey and re-demarcation of the Dusuwa Forest Reserve. “We intend to include in our 2021 budget proposal, the demarcation and re-survey of at least two more forest reserves. The demarcation of our forest reserves will continue annually and run concurrently with the lifespan of the Governor Buni Climate Change Action Plan for Yobe State”, he said.

The commissioner enjoined the state’s international partners, NGOs, CSOs and all the people of the state to support and participate in the governor’s drive to restore the state’s forests through the Governor Buni Climate Change Action Plan “for we firmly believe that by the year 2024, a total of 323, 748, 51 hectares will be planted with the strategy put in place for the protection and management of these trees.”

It is clear that under Governor Buni’s leadership, Yobe is set to reverse the decades long trend of desertification and desert encroachment and thereby free a vast swathe of land for the people to engage in agriculture and food production.