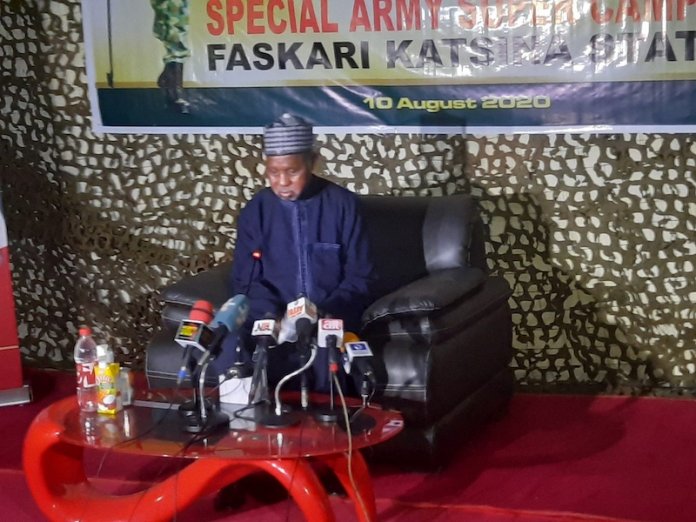 The Katsina State government has concluded arrangements for the establishment of village security councils across its 361 wards to ensure the sustainability of military operations in the state.

Governor Aminu Bello Masari, who stated this shortly after an assessment visit to the Special Army Super Camp IV, Faskari on Monday, added that he has inaugurated a committee to ensure the establishment of the security councils.

The governor was in company with his Deputy, Alhaji Mannir Yakubu; the Secretary to the State Government (SGS), Dr. Mustapha Inuwa; and top military officers, at the inspection of the military forms within the camp.

He lamented that the Local Government Reform of 1976 has taken away authority from local institutions without vesting it in anybody, hence the village security councils.

He explained that the village security councils would enhance the sustenance of military and other security efforts of tackling banditry and other nefarious activities even after their operations in the state.

He said: “The local government reforms of 1976 has taken away authority from local institutions without vesting it in anybody. We have formed a committee to see how we can create village security councils in the 361 wards of the state.

“And these village security councils cascade down to remote and small areas so that we have those that we can hold responsible. We hope to have also people that are within the communities that would help the police and even the community policing in order to have security at local levels.

“The military are working day and night to restore normalcy but after their action, we need to sustain and maintain peace in our villages and communities. However, the fight against bandits and banditry is not yet over, we believe more efforts need to be made in order to crash the bandits now.”

He, however, appealed to the Nigerian Army to secure communities captured by bandits to enable the Internally Displaced Persons (IDPs) return to their ancestral homes.

The governor insisted that the prolonged stay of the IDPs in camps would pave the way for those sponsoring banditry to adopt other methods that would trigger bloodletting in the state.

“We want the internally displaced persons to go back home. I have asked the military to secure their villages so that they can go back to their villages as quickly as possible because living them in the IDPs camps for too long would open another window for those who want to prolong this situation,” Masari said.

While lamenting that the activities of informants have truncated the efforts of military in flushing out bandits, the governor urged residents of the state to support security agencies by giving them credible information on movement and the whereabouts of the hoodlums.