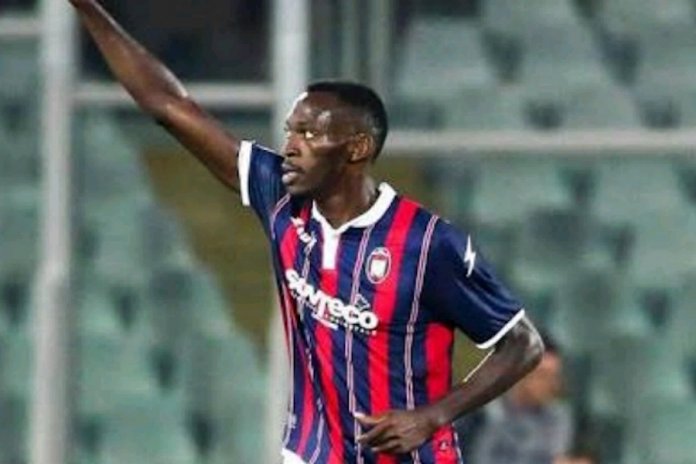 Crotone striker and Serie B top-scorer Simy Nwankwo has set his target on securing a return to the Nigeria national team. The forward was in excellent form for the Pythagoreans in the 2019-20 season, helping the side to gain promotion to the Seria A.

The 28-year-old bagged 20 league goals in the campaign to emerge as the league’s top-scorer and his 21 strikes and three assists across all competitions saw him become the club’s highest goalscorer of the season.

Nwankwo has five caps and one goal for the Super Eagles since he made his debut against the Democratic Republic of the Congo in May 2018.

The forward was part of Gernot Rohr’s side that was eliminated in the group stage of the 2018 World Cup in Russia, playing as a substitute against Croatia and Argentina.

The striker has, however, not featured for the West Africans since he made a bench role against Seychelles in September 2018 in an Africa Cup of Nations qualifiers.

Nwankwo feels Crotone’s relegation to Serie B reduced his chances of a regular call-up to the national team and now hopes for more opportunities with the side.

“When I went down, I knew the risks of losing that spot that I worked so hard to get to although I didn’t play more, which is perfectly understandable,” Nwankwo told ESPN.

“I met a team that was already structured with one of the best African strikers at the moment – Odion Ighalo. And it was normal, it was perfect for me to stay calm and learn and then watch how things are done. And then all of a sudden, I found myself out again, which is understandable.

“So now we are back up. I just have to focus, like always, on what I will do here. The only way I will get myself into the national team is about what I do here.

“This season, I’ve done well. That puts me in a good window to be looked into by the coaches and everybody that makes the decisions. I hope that in the future I will have my chance back again.”

Meanwhile, the 28-year-old has expressed his delight with the transfer of his compatriot Victor Osimhen to the Italian top-flight, Napoli and believes the switch to the Serie A would further aid the forward’s development.

The 21-year-old completed a €70 million transfer to the Parthenopeans, following his eye-catching performances for French Ligue 1 side Lille.
The forward only spent a season with the Great Danes and made an indelible mark for the side, scoring 18 goals in 38 appearances and deservedly scooped the club’s Player of the Season award for his efforts.

Nwankwo has expressed his joy with the transfer of Osimhen to Serie A, which he rated as one of the best leagues in the world.

“I’m so happy that Victor is coming in. It is such a big team and an important and difficult league, if not the number one tactical and defensive league in the world,” Nwankwo told ESPN.

“You know, it is one thing watching from the outside, another thing is actually playing from the inside. But I’m glad Victor is coming into a team that plays football and it will be very, very important for him.

Nwankwo, who has been with the Pythagoreans since 2016, is looking forward to a healthy rivalry with his compatriot for goals in the Italian top-flight.

Besides Osimhen moving to the Serie A, a number of Nigerian players have also established themselves in the division like Udinese defender William Troost-Ekong.

Ola Aina is also making a key impact with Torino, Victor Moses is on the books of Inter Milan, there is also Bologna’s Orji Okonkwo and Joel Obi could make a return to the top-flight as his club Chievo Verna are involved in promotion playoffs.

“I’m glad now we’re growing, when I came, only Joel was here, with Orji Okonkwo also in Bologna, but not playing so much,” he added.

“Then we had a couple of lads in Serie B, but now we are growing and I’m looking forward to meeting all the guys next year in Serie A.

“That will bring in more Nigerian viewers back to the league. Not just only about the Juventus and Inter Milan games, but now at least you will watch every game because you have your guys representing you everywhere.

“And it’s also good to have the guys around. Once in a while for sure, we will meet up. After games, during games, we can talk. We can also help each other one way or the other. I think it’s a good thing and I hope more guys come in as a well.”

Nwankwo, who has five caps for the Super Eagles, joined Crotone from Gil Vicente and will hope to play a prominent role for his club in the 2020-21 season.