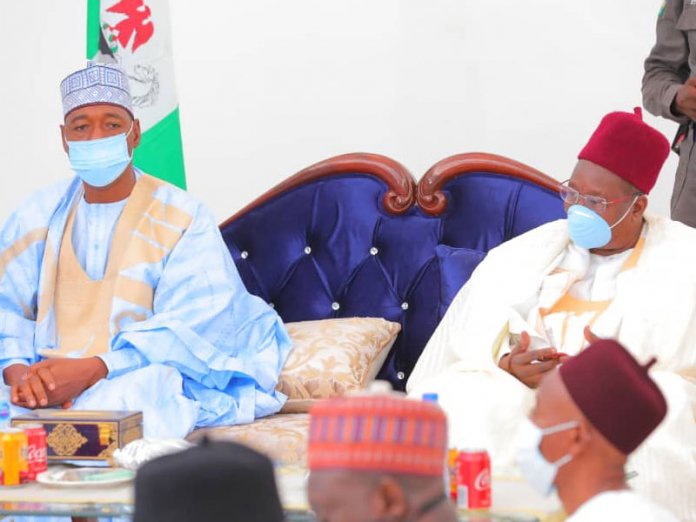 The Shehu of Borno, Alhaji Garbai Elkanemi, has decried the level of insecurity in his state, saying the people of Borno State now live in fear. He said the state was no longer safe for anyone, including the governor, Babagana Zulum, who is constitutionally the chief security officer. The paramount ruler spoke when he paid the traditional sallah homage to Zulum at Government House, Maiduguri, the state capital.

Elkanemi’s comments followed last week’s attack on the governor’s convoy between Baga and Munguno, and another attack in Maiduguri, on the eve of the Eid-el-Kabir festival, where six persons were officially declared killed and 27 others were injured.

Zulum had last week attributed the attack on his convoy to sabotage by the military. He was attacked while on a visit to Baga to distribute palliatives to internally displaced persons. The governor, who left Maiduguri on Monday afternoon and had already visited some parts of the state, was forced to spend a night in Monguno before returning to the state capital following the attack.
Speaking on the incident, the Shehu of Borno called for urgent intervention to secure the lives and property of the people. He told the governor, “Your Excellency, we are not happy about what happened in Baga the other time. It is very unfortunate and a great pity. If the convoy of the chief security officer of the state will be attacked, then, wallahi nobody is safe, because he is the number one citizen of the state; he is the chief security officer of the state.

“If a convoy of such highly placed person in the state will be attacked, I repeat, nobody is safe. The matter is getting worse. I urge everyone of us to raise up our hands to seek Allah’s intervention.”

The royal father, who also spoke on the COVID-19 pandemic, urged residents of the state to continue to adhere to all preventive protocols advised by health experts.

He lamented the rate at which trees were being felled in the state, urging the state government to take urgent steps to halt the act to avoid a serious environmental problem. He also called for the reintroduction of tree planting, which was a regular practice in the past.

Responding, Zulum thanked the Shehu for the visit and assured him of government’s readiness to address the issues raised.

In a related development, a lecturer at the University of Maiduguri (UNIMAID), Professor Khalifa Dikwa, said President Muhammadu Buhari “is doing all in his power to end the war,” but claimed some individuals might be sabotaging his efforts.

Dikwa, who has been at the forefront of efforts to restore peace to the state, told journalists yesterday in Maiduguri, “Why I must exonerate the president, it is the view of the people that some of them (forces) do not want the war to end. They are making money.”

He said the attack on the governor’s convoy might have been initiated by some soldiers “to stop him from having a free movement in Baga. It is possible, since it is true that the soldiers have taken over the fish business in Baga, acting like gendarmes along Maiduguri-Ngala road.”

Dikwa said it was known to everyone that “soldiers are doing things other than their main job at the borders. The military will deny it even if the governor describes exactly what they are doing in Baga and Gamboru Ngala.

“The fish packages don’t come to Maiduguri market, but go to Hadeja and Yola markets.”

Zulum had on Thursday accused the military of sabotage in connection with Tuesday’s attack on his convoy. He told reporters in Munguno, “As far as I am concerned, what happened in Baga is a complete sabotage by the military. There is no Boko Haram in Baga.

“I wonder, we have over 1,181 soldiers in Baga, 72 officers; 400 soldiers in Mile 4 and 1,900 soldiers in Monguno. I see no reason why only five Boko Haram men will stop them from occupying Baga town.”

He added, “The troops have been in Mile 4 for over one year, there is complete sabotage, the problem is not with President Muhammadu Buhari but the command and control structure. There is a need to look into the command structure.”

Zulum had, in a viral video, told an army commander that there was an attempt to sabotage his visit with attack on his convoy.

The governor insisted that the exchange of fire was between the army and the Police Special Anti-Robbery Squad (FSARS), who were leading his convoy into Baga town, adding that Baga is not inhabited by Boko Haram.

Zulum said, “The shooting that happened this afternoon (Tuesday) is between the military and maybe our police and the civilians. There is no Boko Haram in Baga town. We remain grateful to all of you, but the commitment is not there at all.”