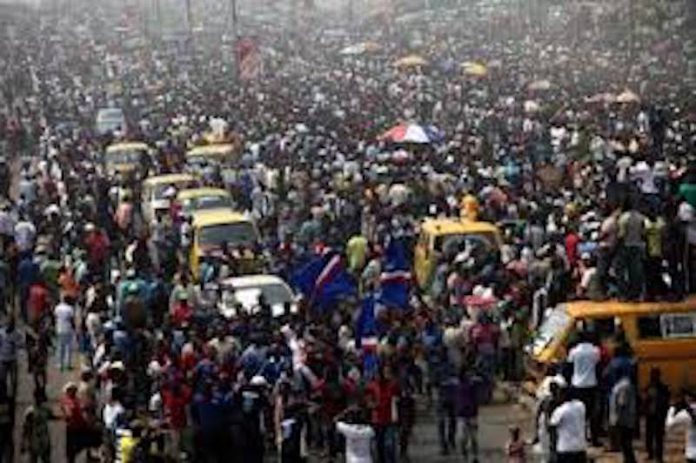 In the 19th century, English scholar, Thomas Malthus in his widely read book ‘An Essay on the principle of population’ warned the world that the geometric growth of human beings will far outstrip the resources needed to take care of them. He warned that there will be lots of famine with its attendant undesirable consequences and that the world should brace up for the agony that would follow.

The West proved him wrong as they used science and technology to give their citizens a better deal in life.

However he is indeed a sort of prophet as his prediction seems to have come to pass in Nigeria – the African continent’s most populous country which earned her the ironical sobriquet ‘The Giant of Africa.’

Nigeria has been cursed with the worst set of leaders both military and civilian and the lack of vision from these overlords has ensured the perpetuation of the vicious cycle of poverty which has been the lot of the populace.

Population growth is a two-edged sword. On the one hand it could propel a nation to greatness and the zenith of economic growth and development. The China example is there for the world to see as the fastest growing economy leveraging on their large population as the world’s most robust market. This was because its leaders since 1949 when Mao Tse Tung took over power have been visionary and have translated this vision into pro-people policies. They also ensured that their country was investment friendly which saw the United States and the west setting up shop massively in their country.

Nigeria on the other hand has no clear-cut plan for her citizens beyond empty rhetoric and grandstanding. We have had vision 2000, 2010 and 2020 with the economic situation of the country deteriorating and no solution in sight.
The average birth rate in Nigeria according to report is put at 5.3 per woman and it is as high as 7.3 in Katsina State.

The government has no plan for anybody as we are all left to our devices and survival strategy. The current challenge of the Covid-19 pandemic where very few citizens received palliatives is a clear pointer to where we are headed.

Malthus was a die-hard advocate of population control long before it became a global buzzword. China had to embark on a one child per family policy in 1978 to keep their population under control after the Cultural Revolution failed to leapfrog the Asian nation into the economic big league.

Coming back home, population control has been an extremely hard sell as most people especially the proletariat believe that children are a gift from God and as such they should perpetually be open to life.

We recall vividly the attempts by the then Military Head of State, General Ibrahim Badamosi Babangida to limit the children per family to four. The religious leaders and the conservative cultural practices of the people made the idea end up in a fiasco.

By 2050, there is the projection that Nigeria’s population will be well over 700 million. This is really scary when you take into consideration the reality of scarce resources that is available to live a decent and productive life. If at 206 million, there is massive unemployment, poverty, hunger and the dearth of a welfare state, imagine how it will be by 2050! It will be worse than the state of nature.

There must be a critical paradigmatic shift as we grapple with the realities of being domiciled in a failed state where every resident is a local government unto him/herself.

The issue of population is a personal one and it is wrong to impose strict population control as a public policy. However there should be some robust form of suasion to ensure that each citizen has children that they can reasonably cater for.

It is the quality of the kids that really matter and not the number. The challenge of day- to- day modern living is different from what obtained in the 20th century where the family unit was stronger and we were our brother’s keepers.

Things have changed now as the extended family which was a huge source of economic buffer is given way for the ascendancy of the nuclear family as a result of the brutal financial pressures of the 21st century.

While we could blame the government for our woes as the country may have been better if corruption was reduced to the barest minimum, individuals also have a critical role to play to ensure that their kids get a head start in life in the ever-increasing world of competition.