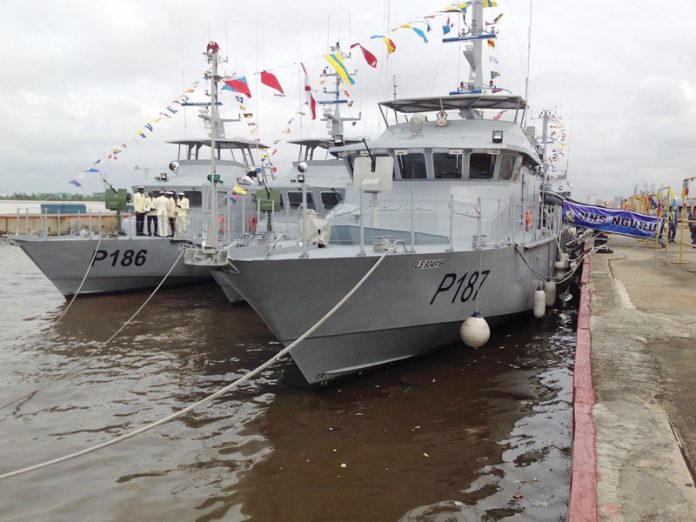 To tackle the resurgence of militancy and sea robbery in its maritime domain, the Nigerian Navy at the weekend commenced Exercise Calm Waters II.

The exercise, which was flagged off simultaneously in Western, Eastern and Central Naval Commands, was necessitated by the need to contain the spate of sea robbery, militancy and piracy, which has posed a threat on sea farers and economic prosperity at the sea.

At the flag-off ceremony at the Western Naval Command (WNC) at the Nigerian Navy Ship (NNS) BEECROFT jetty inApapa, Lagos, the Flag Officer Commanding (FOC), WNC, Rear Admiral Oladele Daji, said the exercise was for an initial period of 30 days.

To participate in the exercise, the navy deployed eight ships, two helicopters and a Special Boats Services (SBS) detachment to cover up to 200 nautical miles of the Nigeria’s Exclusive Economic Zone (EEZ).

Also, gunboats and patrol crafts were deployed to cover the back waters especially creeks along the Lagos to Badagry flanks where militants were said to have terrorised recently.

Daji said naval personnel have already been deployed to cover identified creeks where the militants are suspected to be hibernating, noting that Calm Waters II was simultaneously flagged off across the three operational commands of the navy to smoke out criminals.

He said the exercise was aimed at furthering the strategic directive and vision of the Chief of Naval Staff (CNS), Vice Admiral Ibok-Ete Ibas, adding that it would enhance the capacity of the command’s fleet.

He said: “We have been conducting series of exercises at the command level. The purpose of OKUN ALAFIA II (Calm Waters II) is in three folds-one is to consolidate on the gains of the previous operations; Western, Central and Eastern Naval Commands to have handshake at sea, so that criminals moving from one area to the other do not have the leeway to do that.

“We are carrying out operations in our backwaters to ensure that those that are unable to operate at sea do not have the freedom to terrorise our people at home.

“We have covered those riverine communities, and as I speak with you, my men are already there mounting surveillance.”

Urging the public to volunteer useful information to the navy, the naval boss said such was needed to end all forms of criminality in the country’s waterways.