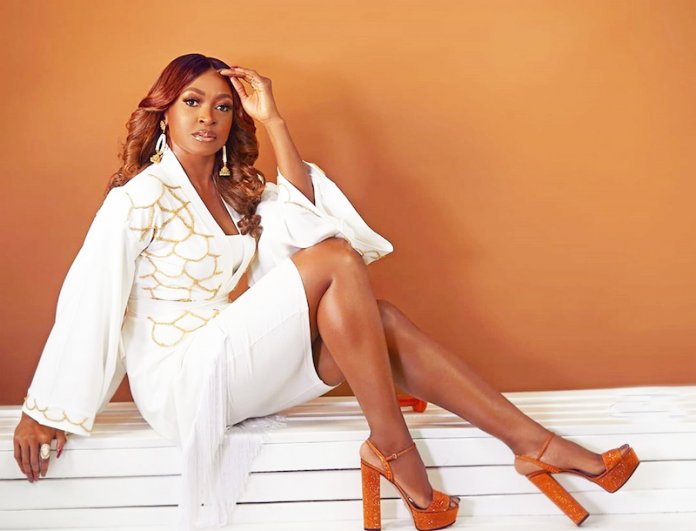 She may not cut the image of someone in this age bracket; believe it or not, screen diva Kate Henshaw is 49. The veteran Nollywood actress celebrated her birthday last Sunday, and she slayed! In the mood of celebration, the fitness enthusiast and brand influencer shared stunning images from her birthday shoot session with celebrity photographer, Busola Dakolo. Kate, the ever smiling lady is a bundle of energy in the behind-the-scene video she shared from the shoot. She looks ravishing as she seems to have rolled back the clock.

The ageless beauty who rules Nollywood showed off her toned shape, looking years younger than she is in the series of posts via her Instagram page. The actress used the opportunity to appreciate God for His unfailing love and palpable favour over her. She admits that she is not perfect but God perfects all that concerns her. She captioned one the post “Your unfailing love for me and your favour over me is palpable. I am grateful to Almighty God for adding another year to me. Not that I am perfect but you perfect all that concerns me…..”

Her comments section poured with love and affection from her friends, fans and colleagues. In another, the sweet single mother of one expressed gratitude to her friends and fans for showering her with love on her birthday. “Every blessed year, I am blown over, humbled, and truly overwhelmed by the outpouring of love and prayers you send my way. For everyone who commented, liked my pictures, called, texted, DMd, Storied, Feed, sang, exposed me with their posts (you know yourselves)…. my heart is still singing songs of joy. My God will honour you.

“My God will show up for you before you ask Him to. Tears of joy, peace unbridled will be your portion. Blessings in things money can and cannot buy will be yours. You will be a blessing and be blessed even in this year 2020 because it costs God nothing to turn things around in the twinkle of an eye. Lots of love to you all…”

At 49, a consistent workout routine is one of the secrets to her ageless looks. Kate is a gym addict who makes working out seams easy and with a body like hers; you can pretty much wear whatever you like.

From when Henshaw made her debut in 1993 in the movie, “When The Sun Sets”, earning a paltry N35, 000, the famous Nollywood actress, model, television personality, and entrepreneur, has always blown the hearts of many with her talent and skills in interpreting roles. She didn’t think about becoming an actress until 1993 when she participated in her every first audition and got her first role. This, to her surprise, gave her a lead role. This was the first time she appeared in a big movie in Nollywood.

Even though the role was regarded as not a huge success for her, it actually marked the beginning of her career. Eventually, she grew into a big star that she is now. In 2008 she won the Africa Movie Academy Award for Best Actress in a Lead Role for the film Stronger Than Pain.

In the pipeline for the actress is an untitled Nigerian Netflix Original, directed by filmmaker Akin Omotoso, starring Kate Henshaw, Ade Layoe, Richard Mofe Damijo, Joke Silva, amongst others. This six-part series, announced in February, is set in contemporary Nigeria and shot in Lagos.