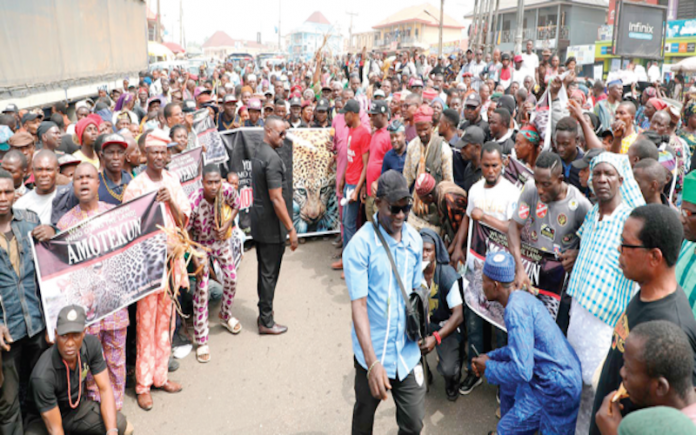 The operatives of the Adigboluja Police Station in Ogun State have allegedly shot and killed a motorcyclist and left three others injured at Ojodu Berger area of Ogun State.

The operators of commercial motorcycle were protesting the hike in ticket fee imposed on them by a newly created body called ‘ROMO’ by the state government.

The motorcyclists were said to have been paying N200 as ticket fee before ROMO was established.

One of the cyclists, Mr. Kunle Idowu, said that they were protesting against the increase in rate around 10a.m. when the members of ROMO arrived at the park to stop them from protesting the hike in ticket fee.

As a result, an argument ensued between ROMO members and the riders. The ROMO members left and returned later with a team of policemen from Adigboluja station to disperse the protesters.

He continued the police did not caution anyone to stop protesting. Rather, “they started spraying us teargas and shooting indiscriminately. It was in the process of their shooting that stray bullet hit one of us called Abdulahi and injured four others in the process.

“Some of the policemen also beat our members and took away many motorcycles. I don’t know why they are treating us like this? We are also citizen of this country. We are law abiding,” Idowu said.

Another motorcyclist, who identified himself as Olope, narrated how they were picking passengers at Kosoko junction, opposite Just Rite Mall, the boundary between Lagos and Ogun State, when some members of ROMO accosted them to pay more.

Olope said: “They told us we were in Ogun state boarder. We are to pay more ticket fee.

“While we pleaded that the money imposed on us was much, the policemen with ‘ROMO’ team seized and left with our members’ motorcycles because we told them we could not afford the N500 ticket.

“Few hours later, Adigboluja DPO led his boys to the scene and started beating our members with his pipe. His boys beat us with stick.”

Olope said that about 100 bikes were taken to the police station.

“Our members that went to Adigboluja police station to get their bikes were arrested. The police also took the remains of the man they shot to their station,” he explained.

The motorcyclists pleaded that the Ogun State Government should intervene in the matter so that the state commissioner of police would know that they are doing their lawful business. “We are not criminals. We don’t want to go into crime that was why we took to Okada riding,” he said.