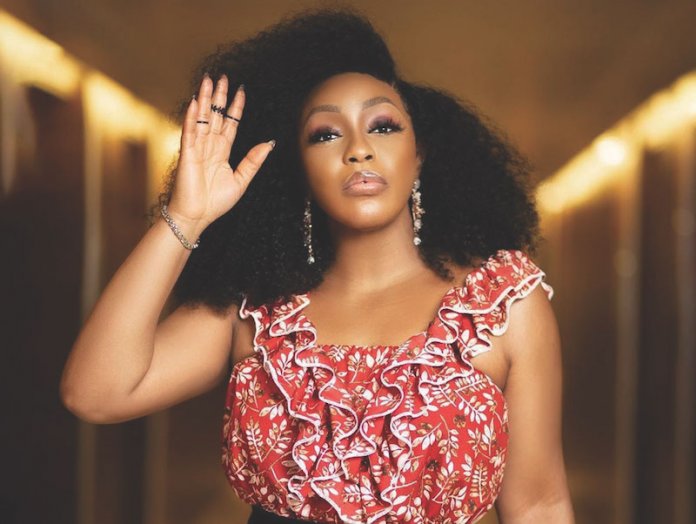 At 45, veteran actress, Rita Dominic is halfway through the 4th floor as she celebrates another year, with thanks and praise to God for her life and good health, writes Ferdinand Ekechukwu

Famous Nollywood star, Rita Dominic, celebrated her birthday last Sunday. The screen goddess and fashionista, whose sense of style has remained a thing of admiration for many, turned 45 on that special day. She shared a video of some gold-coloured balloons with the inscription “Happy Birthday Rita D” on one. The actress has gratified movie buffs with her plays for over two decades now and rightfully thanked God for her life and good health.

She also thanked her fans for their support in her 22 years journey as a Nollywood actress. “Thanking the Almighty for another year, for life and good health. I’ve been in the industry for 22 years and you all have been steadfast with your support. This I do not take for granted. It has been good most times and rocky sometimes but in all, I give God the glory. Love you all so much! Bless. Happy birthday, Reedee #ritadominic”.

As part of her big day, the light skin actress took to her official Instagram page to share stunning new photos of herself posing for the most iconic shots to connect with her fans and followers. Rita whose social activities and red carpet photos are always a delight did not fail to leave her viewers gushing about her looks. “I just want to ‘relass and be taken kiaroff’ taday”, she captioned one of the posts which show her dressed in a two-piece ivory pantsuit and platinum blonde hair.

“Surprises and more; thank you all so much,” the veteran actress said in another post, thanking all those who had nice things to say about her regardless of her status on her birthday. No doubt, Rita Dominic is loved by a lot of people including her colleagues in the entertainment industry. On her 45th birthday, congratulatory messages from fans, colleagues and loved ones reiterated the steadfast and endless affection for the proud indigene of Mbaise, Imo state.

It was such that steeped the gorgeous actress in an overflow of emotion. And she acknowledged the great day: “You all came through for me yesterday. I am always so overwhelmed each year with your outpouring of love, making a grown woman cry. From the depth of my heart, I say thank you and may God bless you all abundantly! Love you all.” The University of Port Harcourt Theatre Arts graduate has starred in movies more than records could account for.

Upon making her debut in the 1998 movie, A Time to Kill, the multiple award-winning thespian, producer and co-founder of The Audrey Silva Company, has ever remained relevant to the growth of the industry, earning goodwill of positive and outstanding image with love. She once recounted her journey thus: “When I came into Nollywood, me and some of my peers at the time, we were just doing this because we love to do it.”

True to her words then, “There was no money in it but we just enjoyed acting. I studied Theatre Arts and I remember saying that all I wanted to do was to work in the film industry. It wasn’t even called Nollywood at the time. So, to still be here and see the growth is a thing of joy”.

Rita persistently reinvents herself in terms of her craft and she is not adept to a particular role.

She is also known for her ability to thoroughly interpret roles and embody characters with aplomb.

Her latest movie, ‘La Femme Anjola’, a psychological thriller which has the classic elements of film noir but with an African twist, will see the screen diva play in a lead role as a femme fatale. In contrast however, Rita is not a femme fatale. She doesn’t look it. She’s as attractive as she appears a good woman, especially one who will ultimately not cause distress to a man who becomes involved with her, in reality.

You can only tell if having met her one on one. She is remarkable in appearance, grace and artistry. Over the years, she has achieved the consistency of character and performance that have eluded many in the movie industry. Flawless in delivery, gorgeous in countenance, she has remained one of Nigeria’s iconic and versatile actresses. An array of roles in different characters over the years have somewhat affected the Rita Dominic brand in the real world. Perhaps, leaving her as a superhuman to her followers, but then she reckons that she tries as much as possible to be herself regardless of the name Rita Dominic, or her being an actress, that she’s just an ordinary person.

Rita is the kind of person that likes simple things, even though a lot of people find it difficult to believe. With her simple lifestyle, maybe they can connect with her on that level. That much, her strong social media presence has helped grown and maintain her fan base by direct conversation with her followers, so many of who go overboard sometimes to appreciate her craft whenever they see her.