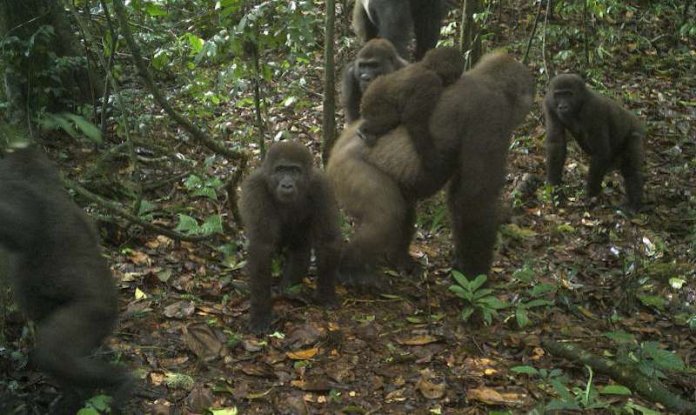 Conservationists in Nigeria have ascribed the sighting of a family of healthy rare Cross River gorillas with multiple babies in Nigeria’s Mbe Mountains of Cross River State to the good handiwork of conservation efforts in the country.

Recently, conservationists captured the first images of a group of rare Cross River gorillas with multiple babies in Nigeria’s Mbe Mountains, proof that the subspecies once feared to be extinct is reproducing amid protection efforts, according to the Associated Press.

The Director of Technical Programmes, Nigerian Conservation Foundation, Dr. Joseph Onoja said, “It is a major achievement for conservation in Nigeria and kudos to the World Conservation Society (WCS), Nigerian programme and the Conservation Association of Mbe Mountains for the work they are doing which has led to the sighting.”

Onoja said one thing that this discovery points to is that “we have an opportunity here to other species that are going into extinction or are locally extinct in Nigeria. By the time concerted effort by the government, individuals, and conservation bodies put heads together, we will be able to reverse the trend of some of our endangered species.”

Cross River State, Nigeria, is in the tropical moist forest zone (or Guinean forest region) and home to a diverse assemblage of primates, according to a study by Edem A. Eniang, Professor of Wildlife Resources Management, Herpetology and Biodiversity Conservation Dept. of Forestry and Natural Environmental Management, University of Uyo, Akwa Ibom State.

Giving his opinion of what led to the disappearance of the primates, Prof. Eniang said it was caused by increasing human population and the attendant desperate economic situation of the people following years of military rule and failing economy led to unsustainable forest resource exploitation and destruction.

In 1988, Nigeria was ranked as 8th among the countries of the world with the highest primate diversity and 7th in terms of degree of primate species endemism. Therefore, it becomes extremely necessary to pursue a multifaceted conservation strategy to save the myriads of primates and biodiversity inherent in the tropical moist forest ecosystem, Eniang said.

The declining status of the tropical moist forest and wildlife, in general, and decimation of primates, in particular, requires urgent realistic and effective steps, including all people and factors involved, he said.

Only around 300 Cross River gorillas were known to be alive at one point in the isolated mountainous region in Nigeria and Cameroon, according to the Wildlife Conservation Society (WCS), which captured the camera trap images in May. More colour images were recovered last month.

John Oates, professor emeritus at the City University of New York and a primatologist who helped establish conservation efforts for the gorillas more than two decades ago, was excited about the new images.

“It was great to see … evidence that these gorillas in these mountains are reproducing successfully because there have been so few images in the past,” he told The Associated Press. “We know very little about what is going on with reproduction with this subspecies, so to see many young animals is a positive sign.”

Conservationists said they do not know how many Cross River gorillas remain in the mountain cluster and have been trying to track the subspecies for some time.

About 50 cameras were set up in 2012 and multiple images have been captured in Cameroon’s Kagwene Gorilla Sanctuary and in Nigeria’s Mbe Mountains community forest and Afi Mountain Wildlife Sanctuary. But Cross River gorillas are notoriously difficult to capture together on camera and no images had captured multiple infants.

According to AP, an alliance of nine local communities, the Conservation Association of the Mbe Mountains, has been working with the Wildlife Conservation Society since the mid-1990s to help protect the Cross River gorillas. Since that time, there have been no recorded deaths in Nigeria, the society said.

The gorillas at one point had been thought to be extinct, according to the society’s Nigeria country director, Andrew Dunn.

“It’s a big success story that shows communities can protect their wildlife,” he told the AP.

Cross River gorillas have been threatened for decades primarily by hunting but also by loss of habitat as residents cut down forests to make way for agriculture. The subspecies was “rediscovered” in the late 1980s.

About 100 Cross River gorillas have since been recorded in Nigeria’s Cross River State and about 200 in Cameroon in a trans-border region of about 12,000 square kilometers (4,633 square miles). The Mbe mountains forest is home to about a third of the Nigeria population.

The gorillas are extremely shy of humans and their presence is detected mostly by their nests, dung and feeding trails, experts say.

A team of about 16 eco-guards have been recruited from surrounding communities to patrol and protect the gorillas and other wildlife, Dunn said.

The new photos were taken in a community forest without any formal protection status, Imong said, “an indication we can have strong community support in conservation.”

Hunting was always the main threat, he said, but “we do believe that hunting has reduced drastically.” The conservation groups also are working to reduce illegal cutting of forests, he said.

But other dangers remain.

“Although hunters no longer target gorillas, snares set for other game pose a threat to the gorillas as infants can be caught in them and potentially die from injuries,” Imong said. Disease is also a potential threat, along with conflict and insecurity in Cameroon.

“Refugees from the ongoing insecurity in Cameroon are also moving into the area, and they will likely increase hunting pressure and the need for more farmland,” Dunn said.

For now, they must rely on the work of Nigerian communities.

“I feel honored to be part of the efforts that are producing these results,” said Chief Damian Aria, the head of the village of Wula.

He told the AP his community and others have worked hard to help preserve the natural habitat for the gorillas, and they are proud of their efforts.

“We are so happy they are reproducing,” he said. While the gorillas’ livelihood is important for nature, Aria also hopes that mountain communities in due time will benefit from the tourism they might bring.