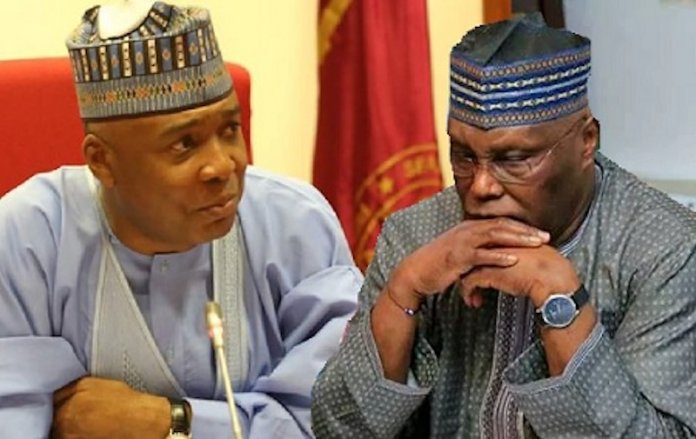 A civil society group, Anti Corruption Network, has implored the presidency and the All Progressives Congress (APC) to cease the attack on the former vice-president, Alhaji Atiku Abubakar, former Senate president, Dr. Bukola Saraki, and some stalwarts of the Peoples Democratic Party (PDP) as the alleged backers of the cyber scammer, Mr. Ramon Abbas, with the moniker, Hushpuppi, who was recently arrested in Dubai.

The group carried out a protest march which lasted for over an hour yesterday at the Unity Fountain, Abuja.
The protest was on the heel of the statement issued over the weekend by the former deputy national publicity secretary of the APC, Mr. Yekini Nabena, alleging that Hushpuppi’s affinity with the PDP leadership was not a mere coincidence.

Nabena also implied that the link with Hushpuppi was why PDP stalwarts turned Dubai into a hub for their strategic meeting ahead of 2019 general election.
But the convener of yesterday’s protest, Mr. Roland Afeodih, fiercely condemned the attack on Atiku, describing it as unwarranted.

He said the group resolved to embark on the protest as the trial by the social media was politically orchestrated by the ruling party to impugn on the character of Atiku and Saraki.
He appealed to President Muhammadu Buhari to investigate the people backing Hushpuppi and prosecute them if necessary instead of allowing the victimisation via social media to thrive.

The protesters chanted various solidarity songs and carried several banners that bore inscriptions like: ”Atiku is Innocent. He is a Democrat;” ”Saraki Never Supported Criminality;” Hushpuppi is a Criminal;” ”APC Should Be Independently Investigated” and ”Leave PDP Alone and Focus on the Economy.”

Afeodih described Atiku as a successful businessman, who should not be vilified as the sponsor and godfather of Hushpuppi, simply because the latter snapped a picture with the former vice president.

”We are giving the president the go-ahead to investigate Hushpuppi. We just discovered that some people in government are the ones backing Hushpuppi, not Atiku, Saraki, Hon Yakubu Dogara, and Senator Dino Melaye. These are successful people and role models we cannot rationalise why they are damaging their reputation,” Afeodih said.
He said the PDP will not accept the intimidation and subtle move by the ruling party to rope some of its stalwarts into the Hushpuppi scam.

”APC should not drag Atiku’s name into Hushpuppi’s mess because we will not accept it. Hushpuppi is a criminal and Nigerian youths are not part of his schemes. Atiku and Saraki are democrats. We say no to intimidation and the trial by social media. We insist nobody should insult and drag the names of our leaders into this mess for the youths are ready to rise up and resist them. They should focus on the economy and salvage Nigeria,” Afeodih remarked.