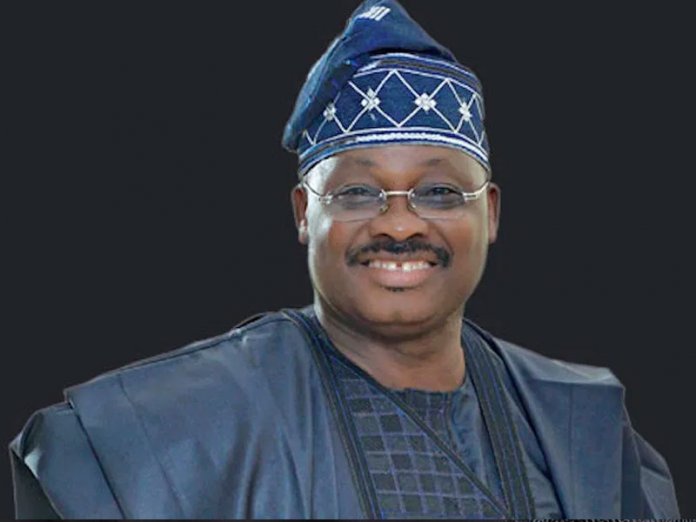 The eternal words of English playwright, William Shakespeare ring true of the late Senator Isiaka Abiola Ajimobi. ‘Some are born great, others achieve greatness while the rest have greatness thrust upon them.’ Ajimobi was the epitome of the second type of greatness as he wasn’t born with a silver spoon in his mouth.

It was the same Shakespeare who said that ‘When beggars die no comets are seen but the Heavens themselves blaze forth at the death of Princes.’ Ajimobi’s death was one of the biggest highlights of 2020.

The corona virus pandemic has overtaken the news and airwaves especially since the lockdown in March with many businesses still shut down till now. Ajimobi’s death is one of those grand news stories which aims at diverting the minds of Nigerians from the ailment that has claimed the lives of the high and mighty including Ajimobi himself as he was said to have succumbed to the cold hands of deaths through a Covid-19 related complications.

Ajimobi has his formative years in the ancient city of Ibadan before he sojourned to the United States of America for the proverbial Golden Fleece. While in Uncle Sam as the US is also fondly called, he had to pull himself by the bootstraps to face the grinding poverty that was the lot of most black students by becoming a mortuary attendant.

He excelled in his studies and resisted the temptation to remain in the US on economic exile by returning back to his motherland to diligently serve her.

His triumphal entry back to the country coincided with when the nation was at the peak of the oil boom, when former Head of State, General Yakubu Gowon made a famous statement that there was ‘much money without knowing how to spend it.’ He joined the then government-owned National Oil and rose through the ranks to become its Managing Director. As a corporate guru and boardroom impresario, he dined and wined with the high and mighty and his views were well sought after by the financial media.

After the sale of National Oil to Dr. Mike Adenuga in a privatization round, he invariably became redundant. Rather than go into private business as was the path that was the norm for someone of his caliber, he decided to do something totally differently by heeding the call to public service.

In 2003, he got elected into the Nigerian Senate. As a member of the red chamber and the nation’s highest lawmaking body, he contributed his quota to his fatherland by sponsoring some bills especially with regard to the development of the oil and gas sector which was his previous forte.

In 2007, he went into political limbo as he lost his re-election bid to represent Oyo South in the Red Chamber. ‘Winners never quit and quitters never win’ seemed to be his mantra as he bounced back into political reckoning with his election as the Governor of Oyo State in 2011.

His legacy as governor is mixed. On the one hand, some of his die-hard fans opine that he was a stellar performer who broke the jinx of being elected for two terms – something that even the legendary late Chief Bola Ige couldn’t do in 1983 when he surprisingly lost to Dr. Victor Omololu Olunloyo. His critics contended that his administrative style brought pains to the people of Oyo state. They pointed out to his humiliation of the Olubadan of Ibadan by attempting to elevate some High Chiefs to beaded traditional rulers, the demolition of the studio of popular artiste, Yinka Ayefele, his haughtiness when addressing the students of the Ladoke Akintola University of Technology (LAUTECH) when he referred to himself as the ‘constituted authority’ whom the students had no right to disrespect. His critics contended that his unpopularity cost him the Oyo South Senatorial seat when he attempted to return to the Senate and the All Progressives Congress (APC) losing to the opposition Peoples Democratic Party (PDP).

He subsequently became the Deputy National Chairman South of the APC and was appointed the Party Chairman after the judicial ouster of Comrade Adams Oshiomhole. His ill-health prevented him from physically taking over the highly esteemed office.

From conquering both the private and public sectors, one can say that indeed Ajimobi came, saw and conquered as he bestrode both sectors like a Colossus with the swagger of a General in the days of the Roman Empire of yore.
Death – the only debt no mortal can escape will come when it will come but the most important thing is to leave legacies for the incoming generation to reflect on so that your stay can be aptly said to be ‘The celebration of life.’
––Tony Ademiluyi, Lagos