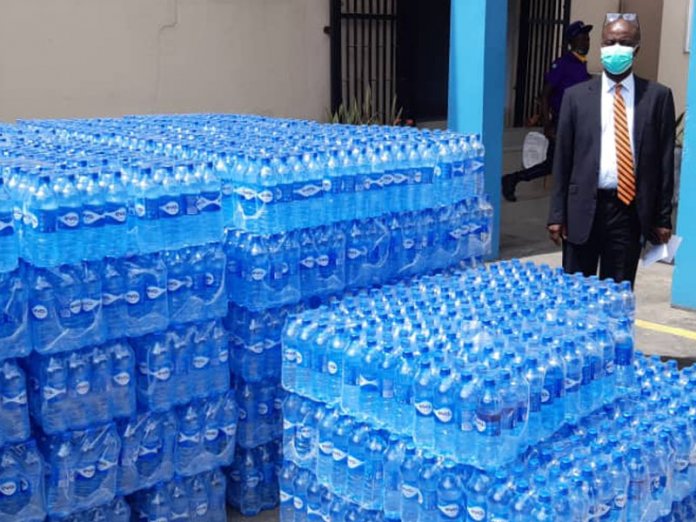 With over 10 million infections, the COVID-19 pandemic is a deadly scourge that governments and corporate organisations across the world are contending with. Hamid Ayodeji examines how the Nigerian Bottling Company has gone beyond the call of duty to assist the Nigerian government in taming the pandemic.

Kathryn Bushkin Calvin, former President and Chief Executive Officer of the United Nations Foundation once remarked that “giving is not just about donating. It is about making a difference.”

As the Covid-19 pandemic continues on its devastating impact across the world, humanity needed individuals and corporations to rise up to the task of protecting those rendered vulnerable in the crisis. Apart from the direct effect the pandemic is having in people’s lives across the globe, the economic impact, including job layoffs, plummeting stock market, global business uncertainties, and economic recession are unprecedented with Nigeria not immune to the effects of the pandemic.

As the healthcare system continues to struggle under the additional strain of the pandemic, the economy is projected to go into a recession by the third quarter of 2020. Finance Minister, Zainab Ahmed, warning about the recession explained that “net oil and gas revenue input to the federation account in the first quarter of 2020 amounted to N940.91 billion, representing a shortfall of N125.52 billion. With the work the Economic Sustainability Committee is doing in bringing up a stimulus package, we believe that we can reduce the impact of that recession.”

“If we implement the measures that have been proposed, we might end up with a recession that is -0.4 per cent, but in any case, we will go into recession. What we are trying to do is to make sure that it is shallow so that we will quickly come out of it in 2021.”

In a country where the government is the biggest spender and where 40.1 per cent of citizens live below the poverty line, according to the 2019 Poverty and Inequality in Nigeria Report of the National Bureau of Statistics, these projections are frightening.

Following the country’s index case on February 27, people expected the worst to come, but the government, through the Nigeria Centre for Disease Control (NCDC) and the Covid-19 Presidential Tax Force, with noteworthy support from the private sector has been battling the pandemic valiantly.

Commendably, the private sector has been incredibly supportive of the government in these times.

One of the private sector players leading the charge against the pandemic in the country is the Nigerian Bottling Company (NBC). The company which has been the franchise bottler and distributor for The Coca-Cola Company in Nigeria since 1951 says it sees the fight as a crucial one for the country, and as more than just another corporate social responsibility initiative.
The company has dedicated substantial resources to battling the scourge of covid-19 on multiple fronts.

The company’s first intervention was targeted at people on the frontline: The patients and healthcare workers. In recognising the need to keep these vulnerable people hydrated and nourished, NBC in collaboration with Coca-Cola Nigeria, donated over 13 million centilitres of its beverages, including Eva premium table water and other soft drinks to patients and healthcare workers at isolation and treatment centres across different states in the country.

In Lagos, the Onikan and Gbagada Isolation and Treatment Centres, Lagos University Teaching Hospital, Federal Medical Centre, Ebute-Metta, and the Lagos Waste Management Authority (LAWMA) whose street sweepers and medical waste workers have been working actively while the pandemic lasts, were among the first beneficiaries of the Company’s initial donations.

The company, in another laudable move, did not neglect vulnerable Nigerians who found it difficult to feed themselves because of disruptions to their businesses and jobs as a result of the lockdowns.

NBC distributed food items to thousands of households across the country to help them mitigate the impact of the pandemic. The first phase of the NBC Food Relief Intervention saw over 2,300 homes in 14 locations across the country receive essential food items, including rice, noodles and cooking oil amongst others.

Commenting on the intervention, Director, Public Affairs and Communications, NBC, Ekuma Eze, said the exercise was part of NBC’s commitment to supporting its host communities across the country.

“The impact of the Covid-19 has been quite unbearable for many families. As a socially responsible organisation, we believe there is no better time to identify with these people across our communities than now,” he said.

While still taking care of the needs of frontline workers and vulnerable Nigerians, the Coca-Cola System also deployed public campaign and advocacy as part of its anti Covid-19 efforts with Coca-Cola Nigeria, suspending commercial advertising and channelling their media assets and social media handles to help support public awareness efforts aimed at containing the virus.
NBC’s Covid-19 interventions also extended to the provision of personal protective gear to its customers and business partners.

For example, the company provided over 484 litres of bulk sanitisers, sanitiser dispensers and face masks to its trade partners. The company also provided hand sanitizer to 2,649 third-party drivers and truck assistants, as well as masks for their use on a daily basis.

The company repurposed some of its supply chain technology and assets to produce hand sanitizers, while leveraging its 3D Printer to produce protective face shields. 118 beneficiary organizations ranging from healthcare facilities, government agencies, regulatory bodies, private sector groups, industry associations, customers as well as security agencies are set to benefit from donations of these items.

Focusing the strength of its business partnerships to support the fight against Covid-19, NBC joined forces with some of its key account partners to further support local government teams and health workers with free meals and Coca-Cola beverages.

Through a grant from the Coca‑Cola Foundation, the Coca‑Cola System in Nigeria has donated N170 million to the International Federation of Red Cross and Red Crescent Societies (IFRC) to support Covid-19 relief efforts in Nigeria. As the country continues to record more cases, the Company has also not relented in its interventions to families and frontline workers. When the pandemic is eventually contained, and the story of how the country fared during the period is documented, the NBC will feature prominently.

With these interventions, NBC has again affirmed that community engagement and support, which continues to endear the company to its host communities, remains a crucial element of its DNA.

The laudable responses further accentuate NBC’s credentials as a responsible organisation that prides in the age-long dictum of being one’s brother’s keeper. The company’s responsive approach to corporate good encapsulates a culture of genuine empathy that transcends corporate social responsibility.