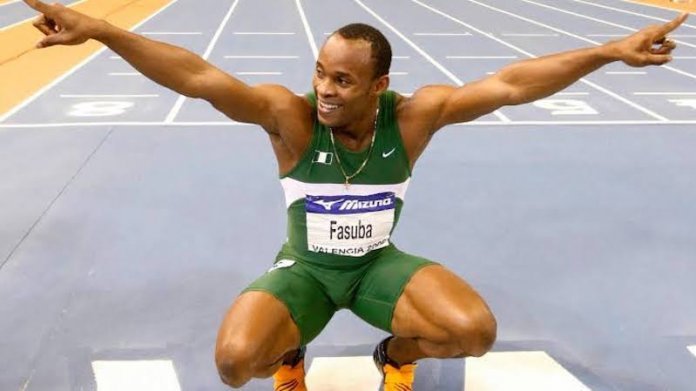 Fourteen years after Olusoji Fasuba set the African 100m record of 9.85secs in Doha, Qatar, the Royal British Navy logistic personnel is surprised that the continental sprint title is yet to be erased by any of the current runners.

The former Nigerian sprint king who also in 2008 became the first African to win the World Indoor Championship 60m gold in Valencia, Spain said yesterday on FUBS WhatsApp platform that given the promise shown by some sprinters, particularly South Africa’s Akani Simbine, that his 9.85secs is still standing remains a surprise.

“I am still surprised that the (African) record is still standing because we have the South African (Simbine) running a lot of 100m under 10sec and he has come closed on two occasions to breaking it,” observed Fasuba who is now based in the UK since dumping track and field for a career in the British Navy.

Simbine who competed in the 100 metres event at the 2013 World Championships in Athletics in Moscow, Russia and the 2016 Summer Olympics won the 2018 Commonwealth Games 100m final gold in Gold Coast, Australia. Simbine finished fifth in 9.94 seconds in the 100m final of the Rio 2016 to leave impression that Fasuba’s African title was a matter of time. It remains a Bridge too far.

Looking at how he achieved the feat in 2006, Fasuba insisted it was hard work and meticulous planning.

“It didn’t start too good for me because I had hopes of winning the World Indoor title that year in Moscow but finished in the sixth positions due to some technicalities,” observed the African record holder who is the only African nay Nigerian sprinter to win three successive Senior African Athletics Championships sprint titles to date.

“Without working on my top end speed, I went to Melbourne for the Commonwealth Games and surprised myself with a silver medal in the 100m,” recalled Fasuba.

“I flew back to Nigeria happy but determined to work harder and three weeks before the African record, i did personal best in the 80m, 120m and 150m time trials my coach, Frenchman Pierre Jean-Vazel set for me. He’s also a statistician,” he noted.

But two days after these wonderful performances in training, Fasuba was to fall sick and was unhappy that his beautiful form was going to waste without any tangible result.

“Two days latter (after running PB in the 80m, 20m, and the 150m), I fell sick and was so unhappy because I knew I was ready to do something great. My coach had to reduce my training workload and gave me more tempo runs.

“On the day of the competition (Doha Grand Prix), I remembered getting to the track and after I started my warm-up, I broke down crying, telling my coach, that I feel ready to do something great but my body didn’t feel like mine at all. “He didn’t panic. He started giving me some different kinds of stretches to put my mind at ease. As we say, the rest is now history after the race with the African title in the bag,” Fasuba stressed on how he dethroned Namibian Frankie Fredericks to become Africa’s fastest man ever, 14 years down the line.

Although he praised the current generation of Nigerian sprinters for putting through the difficult environment in the country to achieve whatever modest achievements that they have recorded, Fasuba insists that “the male sprinters are not coming to either Europe or working on getting scholarships to make themselves get better. Most of them are comfortable sitting back home.”

He however dismissed the age long home-based and foreign-based dichotomy created by successive administrations at the AFN.

“Athletics is an individual sport. The only time we talk of team is in the relays and from past history, when the team do not work together, we lose. I believe the classification system in terms of foreign-based and home-based is an outdated system that needs to be looked into.

Once that is looked into, I believe we will have the unity that the sports of athletics should have,” concludes Fasuba.