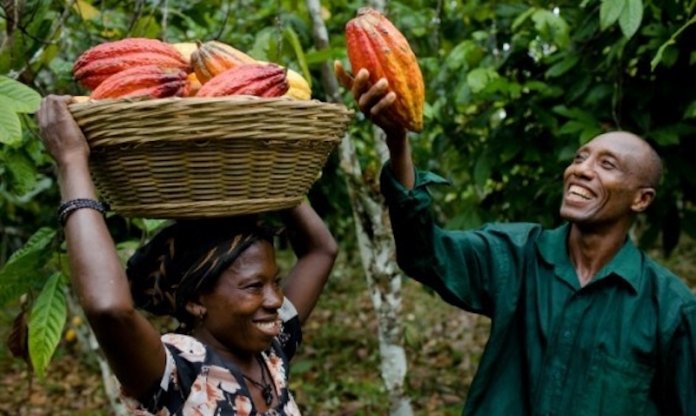 Akwa Ibom State Government has distributed 500,000 cocoa seedlings and other agro-based farming inputs to farmers in the state.

The exercise which marked the commencement of the new cocoa planting season was in line with the determination of the State Governor, Udom Emmanuel to boost agriculture and food security for the people of the state.

The Commmissioner for Agriculture and Women Affairs, Dr. Glory Edet, made the presentation recently, on behalf of the Governor at Odoro Ikpe, Ini LGA Cocoa nursery farm.

Edet, said Emmanuel’s support to cocoa farming has made the state the largest cocoa producing state in Nigeria.
“Beyond ensuring abundance in cocoa production in the state, Akwa Ibom now has the best variety of cocoa in the country.

“The governor has ensured that agro chemicals are also distributed to the farmers to wade off pests while fertilizers and sprayers have also been provided to the cocoa farmers to increase their yields,” she stated.

The State Chairman of the All Farmers Association of Nigeria, ALFAN, Otoinwang Bassey Inyang, in a goodwill message thanked the governor for the consistent support to farmers.
He noted the regime of Governor Emmanuel has witnessed the best intervention in the growth of agriculture business in the state.

The Chairman of Ini local government, Mr Isreal Idaisin, thanked the state governor for appointment of their daughter as Commissioner in the Ministry of Agriculture and Women Affairs, maintaining that it was a plus to the status of the area as the food basket of the state.

He thanked the state for the 14km Ikpe Ikot Nkon -Obotme- Arochukwu Road, the Cocoa Fermentation Factory and other infrastructure in the area.

In their seperate reactions, the Village head of Ikpe Ikot Nkon, Eteidung Ndueso Bassey Udowo, and two cocoa farmers, Chief Monday Solomon Udoh from Ikoi Eben Obon and Mrs. Uduak Aniekan Akpan from Odoro Ikpe, all of Ini LGA, expressed appreciation to Governor Emmanuel for his love and interest in Cocoa farmers as demonstrated in the provision of free improved cocoa seedlings and farming inputs to them.

In a related development, the President of Ekemini Co-operative Cassava farm in Odoro Ikpe, Ini LGA, Elder Obonganwan Idara Ekpe, has expressed gratitude to the Governor for the provision of improved cassava cuttings and other farming inputs for the women to boost their cassava cultivation.