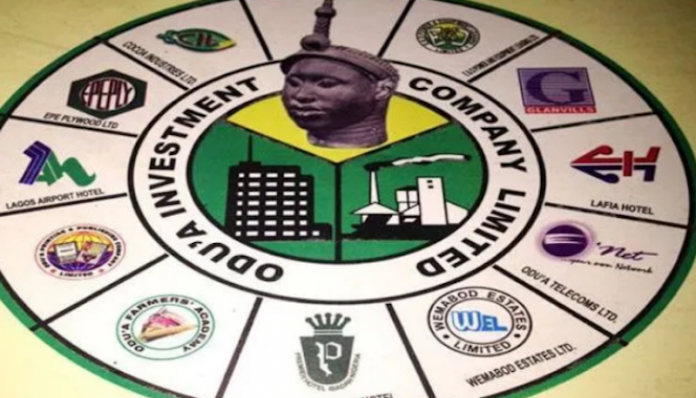 Eric Teniola
The South-west governors have reconstituted the board of directors of Odua Company Limited.
The new board is headed by Dr. Lawrence Olusegun Aina (65), past President of West Africa Bankers Association and former President of Otan-Ayegbaju Development Association in Osun state.

Other members of the new board are Chief Segun Ojo, a former Commissioner for Finance, Budget and Economic Planning in Ondo State; Dr. Tola Kasali who served as Commissioner for Rural Development in Lagos State between 2003 and 2007; Seni Adio, the Managing Partner of Copley Partners (Solicitors & Barristers; Mr. Olusegun Olujobi who is ex-Accenture and Energy Industry player and Otunba Bimbo Ashiru, a renowned banker and immediate past Commissioner for Commerce and Industry in Ogun state.

The other two bodies are the Interim Common Services Agency for Northern Region and Eastern States Interim Assets and Liabilities Agency (ESIALA), which we don’t hear of, these days.

Profitability was achieved by Odua Company between 2014 and 2018, an unprecedented dividend of N1.2 billion was paid.
The fulcrum of credible strategic partnership is gradually taking shape with the recent strides in the Imeko Tomato to Paste Project and the Westlink Iconic Estate JV at Alakia, Ibadan. These and many more like the Power Generation Project at Ikeja, The Farming Company Limited JV at Oke-Ako Ekiti, the Vitalo Brand Project are initiatives that are unfolding to grow the revenue base of the Company.

The Odua Investment Company is an offshoot of an Economic body of the Action Group, which came to power in 1952 in Western Region.
The Action group (Egbe Afenifere) led by Chief Obafemi Awolowo was formed on March 21, 1951 at the Oke-Bola residence of Chief Awolowo in Ibadan. The house still stands today.

I remember with nostalgia when I was a reporter in the Nigerian Tribune in 1972, I used to collect stories on phone in that house on the Oniru land case dispatched by the Nigerian Tribune correspondent in Lagos, Mr Bayo Osiyemi. It was that time I met Chief Awolowo for the first time in my life.

I almost fainted seeing the man bearing in mind the myth I grew up with about Chief Awolowo in my home town in Idanre in Ondo state. Chief Obafemi Awolowo, its leader later stated that the party had been formed by himself and seven others at a meeting in his house in Ibadan on March 26, 1950.

Awolowo believed at that time that political party funding are the methods that a political party uses to raise money for campaign and routine activities.
As for the political, he enlisted Chief Akintola, Chief Enahoro and others. That political arrangement broke down later.
As for the economic, he enlisted Chief Samuel Olatunbosun Shonibare (19201-1964), Chief Sule Oyesola Gbadamosi from Ikorodu and Chief Alfred Ogbeyiwa Erewarone Rewane (1916-1995) alias Osabokolo from Warri, who later became Chairman Western Nigeria Development Company.

In terms of managing business, Shonibare, Rewane and Gbadamosi were gifted. They were capable of turning anything to an asset.
It was the same scenario that played out in South Africa in 1994 when President Nelson Rolihlahla Mandela (1918-2013) encouraged the then Vice President Thambo Mvuyelwa Mbeki (77) to be in charge of government while the present President of South Africa, Mr. Matamela Cyril Ramaphosa (67), then secretary of the National Union of Mine Workers to be in charge of the businesses for the African National Congress.

The arrangement worked then in that it reduced rivalry. It paid off for Ramaphosa who has an estimated net worth of $450million as of 2018, with 31poperties and previously-held notable ownership in companies such as McDonald’s South Africa, chair of the board for MTN and member of the board for Lomnin
Shonibare and his group established the National Investment Company along with Chief Rewane and Chief Gbadamosi. It was this company that built the Western House in Lagos, Cocoa house in Ibadan and Bristol hotel in Lagos.

Odua Investment Company was formally established in 1976 when Ondo and Ogun states were created out of Western state. The company was to take charge of the assets and liabilities of the whole Western Region. As a reporter with The Nigerian Herald at that time, I covered the inauguration of the new company at Cocoa house in Ibadan.
The pioneer Group Managing Director of the Company then was Mr. Christopher Sunday Olatunji Akande. Mr. Akande (1927-2005) from Arigidi, Akoko in Ondo state.

The flag must not fly half-mast. I understand that the Odua Investment Company wants to diversify into agriculture which was the main goal of Chief Obafemi Awolowo when he established the farm settlements in the old Western Region. Efforts must be made to save Odua Investment Company and the South West governors must ensure that this regional legacy must not only be sustained but improved upon. As long as Odua Investment Company exists those clamouring for restructuring and regionalism are on solid ground.
If other zones of this country are encouraged to develop on their own, there will be less dependence on the centre. And the way we are going now, there may be nothing left to share again in the centre. In short we are heading towards a situation where ‘you are on your own.’