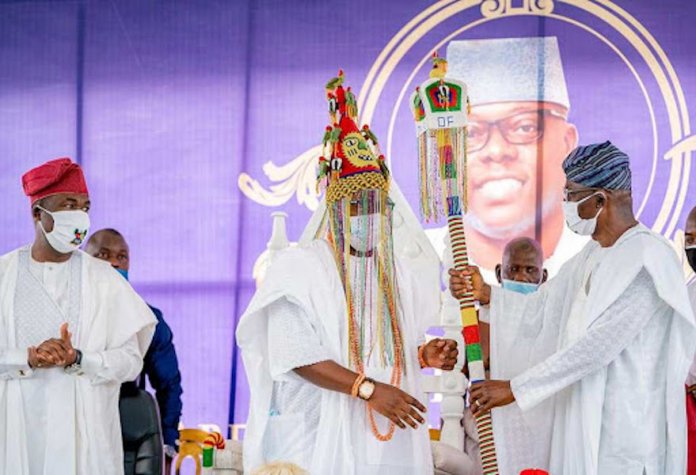 Lagos State Governor, Mr. Babajide Sanwo-Olu yesterday handed over staff of office to Prince Abdul-Wasiu Omogbolahan Lawal as he officially ascended the throne of Iru Kingdom as the 15th Oniru.

At a simple but colourful ceremony held at the Oniru Palace on Victoria Island, Lagos State, Sanwo-Olu installed the new traditional ruler, saying the event heralded a new dawn and era of prosperity in the kingdom.

The Oniru installation came two days after the State’s Executive Council approved the selection of Lawal, the immediate past Commissioner for Agriculture in the state, who was nominated for the traditional stool by the Abisogun clan of the large Oniru dynasty.

Presenting the monarch to the governor for formal installation, the state Commissioner for Local Government and Chieftaincy Affairs, Dr. Wale Ahmed, noted that the process of selecting the new Oniru was fair and open to all contestants.

He said the choice of Lawal was well received by kingmakers and citizens of the kingdom.

Sanwo-Olu, who described the monarch as a seasoned technocrat and distinguished administrator of international repute, said Lawal’s ascension on the throne marked the next phase of Irú journey to the future.

The governor admonished citizens and residents of the kingdom to rally behind the new king in order to move the city forward. He urged Lawal’s opponents and aggrieved individuals to put the event of Oniru’s selection behind them and join hand with the new king for progress.

He said: “Today is a historic day in the history of Iruland, as we gather to celebrate the installation of the 15th Oniru of Iruland. I heartily congratulate His Royal Majesty, Oba Abdul-Wasiu Omogbolahan Lawal, Abisogun II, the Oniru of Iruland on your ascension to the throne of your forefathers.

“I also rejoice with the sons and daughters of Iru kingdom on this auspicious occasion. It is my firm expectation that you all will rally round the new king and join hands with him for the growth and progress of Iruland, and Lagos State in general. Given the pedigree of the new Oniru, I have no doubt that his reign will be a progressive one.

“There is no doubt that the future of Iru Kingdom continues to be bright and promising, and that the ascension of His Royal Majesty, Oba Lawal, marks the start of the next phase of the journey into that future. I commend the kingmakers and elders of Iruland as well as the ruling houses for the peace and mutual understanding that have characterised the process that led to the installation of the new monarch within a period of less than one year after the demise of the former Oniru. This is a remarkable feat, worthy of commendation and emulation.”

Sanwo-Olu pointed out that Iru land had grown in leaps and bounds in the previous decades to become one of the economic nerve-centers in Lagos, assuring the monarch of the State Government’s support towards the realisation of his vision for the kingdom.

The governor said the future of Iru Kingdom looked bright and promising, given the leadership credentials of its new monarch.

He said Lawal’s performance as Commissioner under three administrations in the State and his legacy in the Ministries of Agriculture, and Housing stood him out as one who will bring further positive transformation to the kingdom.