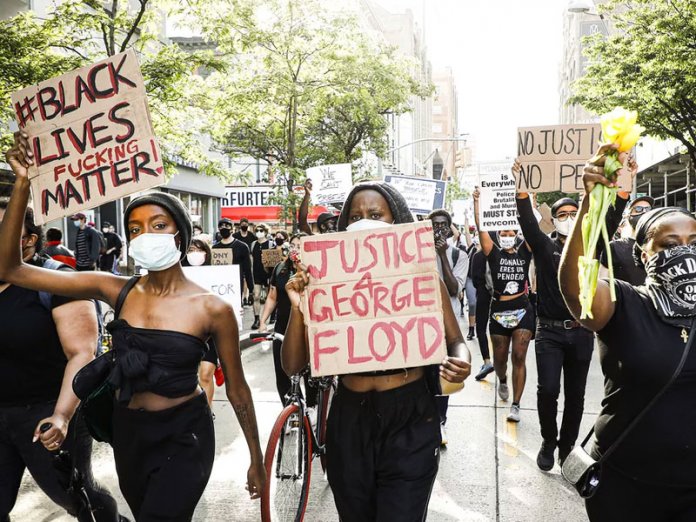 Oni Omoile is a graduate of Iowa State University with a Bachelor’s Degree in Journalism and Mass Communications. He is a former professional athlete, playing three years in the National Football League. He is the son of Nigerian parents, John and Catherine, who immigrated to the United States. This article was written for his personal blog Ogre Chronicle

This is the least surprising event of all time.

It is comparable to repeatedly whacking a hornet’s nest with a stick or twisting a bull’s balls before he rampages into the matador’s arena.

Any living thing put under enough duress will trigger the innate fight-or-flight response that governs nearly all sentient life.

This is no different for us as human beings as the apex of life on this floating space rock, even with the numerous complexities that belie things. To narrow the focus down, this obviously applies to America and its history of racial injustice, from the Natives who were slaughtered and betrayed time and again, to the enslaved Blacks who quite literally built this country from the ground up.

Even having the fortune of living in the most human rights friendly era in humanity’s history, refined by countless years of ideological war, activism and trial and error, it is still so awful that people feel the need to respond this way in order for their voices to be heard. That the ingrained, systematic oppression and outright murder of their brothers and sisters by those sworn to protect them is not okay.

It is explicitly written in our country’s Constitution “When a long train of abuses and usurpations, pursuing invariably the same object evinces a design to reduce them under absolute Despotism, it is their right, it is their duty, to throw off such Government, and to provide new Guards for their future security.”

I may have gone over this a little in previous posts, but putting things into a more personal context feels essential for the content of this post.

Yes, I am (obviously) a black man, born here in the US whilst being ethnically Nigerian.
I have the fortune of being born into a loving two- parent immigrant household who worked (and still work!) themselves to the bone in order to live in a cushy upper middle class suburb where the biggest issues police have to worry about is breaking up teenage house parties and drug abuse.

Even growing up, my encounters with racism were the comparatively milquetoast (yet still meaningful and harmful) stuff like expected to being good at sports, liking rap, and being shipped with the only couple other black girls at our school just because our skin was the same color.

Even now, with the exception of a certain episode in Missouri, all my personal interactions with police have been friendly and cordial. One of my best friends is a cop himself!

All of this goodwill and yet, for the rest of my living days, I will always have that mortal fear in the pit of my stomach whenever I interact with the police because with the figurative roll of the dice, I might end up encountering that/those cop(s) because of what I’ve witnessed in this country.

I’ve made my peace with it if it ever does happen, even if I would still be terrified. I can’t even begin the fathom the fear of people who have much more visceral experiences and claims with police brutality than myself.

Imagine for a second. To the average black person, what options do you think are left in their eyes? Peacefully protest? They are still doing this and rightfully so! But as I literally witnessed from the inside as a part of the NFL during Colin Kaepernick’s anthem protests, they’ll be met with disingenuous criticism about “disrespecting the flag”, even when that very flag itself was borne out of protest, VIOLENT protests I might add. Change things from the inside? We had an ACTUAL BLACK PRESIDENT, and even though it clearly wasn’t entirely his fault given opposition obstruction and the general limitations of the nature of federal/state relations, it didn’t magically ease the racial tensions that have boiled within America like some believed it would that hopeful election night in November 2008.

It is clear that this is an issue that mostly transcends red and blue politics, although objectively speaking it definitely helps to not have the most powerful man in the world call those practicing one of the most fundamental American rights in protesting “Sons of Bitches”. There are considerable amounts of black police officers all across the country and yet the end results appear to be the exact same time after time, indicating that it isn’t merely an individual based crisis, but a cultural one.

Taking into context current events just this month, where a pandemic disproportionately affecting minority communities due to a clear socioe-conomic divide putting them at significantly higher risk to exposure. A black man was filmed being extra-judicially gunned down by two wannabe cops, a black woman slaughtered in her sleep in a no knock raid. Then we had to bear witness to the disgusting video of a man’s life slowly,
painfully, casually taken away on camera despite all available evidence showing no wrongdoing, and then fail to see IMMEDIATE action taken in order to bring these people to justice. How could one NOT see this volcanic eruption of anger borne from the sheer despair and hopelessness of the situation coming?
I hate that things are so bad we are willing to risk COVID exposure that will assuredly kill thousands more in order to get our point. This is unacceptable.

I hate that innocent smaller businesses, none of them too different from the kind of small business my parents own that provided everything I could hope for as a kid, are being caught in the crossfire, not only from this justified anger, but from bad faith extremist fringes who seek to escalate tensions because they’ll feel it’ll benefit their political goals.

I hate that people will tsk-tsk and gaslight these rightfully angry people with asinine tone deaf rebuttals like “All Lives Matter” or out of context quotes from prominent civil rights leaders who helped even get our civil liberties to this point.

I hate that even with the unprecedented amount of support I’ve seen for this specific moment both in my immediate social sphere and even from certain pockets of the country where these protests have been peaceful, the overwhelming response has mostly been met by further escalation proving the entire point of these protests, when not even a few weeks ago protesters armed to the teeth protesting not being able to get a goddamn haircut were handled with far more tact.

The hatred is so all-consuming and exhausting it is extremely tempting to give into apathy and disillusion in order to cope with the pain and function in our own day-to-day lives. Then events like these occur and the anger boils right back up, a draining, seemingly never ending cycle. One of my most hated phrases that I commonly see stated in both real life and on the internet is that “this is not who we are.”
It is typically the rallying cry of undeserved idealistic luxury used to assuage one’s own conscience that things aren’t as bad as they seem. Everyone has their coping mechanisms for the grim realities of this world.

At the same time, we cannot truly hope to meaningfully change course without staring into the pitch black maw that is this country’s bloodstained, brutal history, engraving it into our very souls, accepting that it is very much who we are NOW, and take the steps necessary to make sure this isn’t who we are in the future. It is absolutely sickening seeing the rampant denial of the experiences of millions upon millions of minorities in this country in order to preserve the fragile egos who those who believe America is flawless and claiming otherwise is sacrilege.

America has been good to me, it has been good to my family.
Good however, is the enemy of great, and for a country whose people and its leaders so frequently boast about its greatness, it is tragically failing to meet that standard time and time again for all of its citizens, especially the most vulnerable.