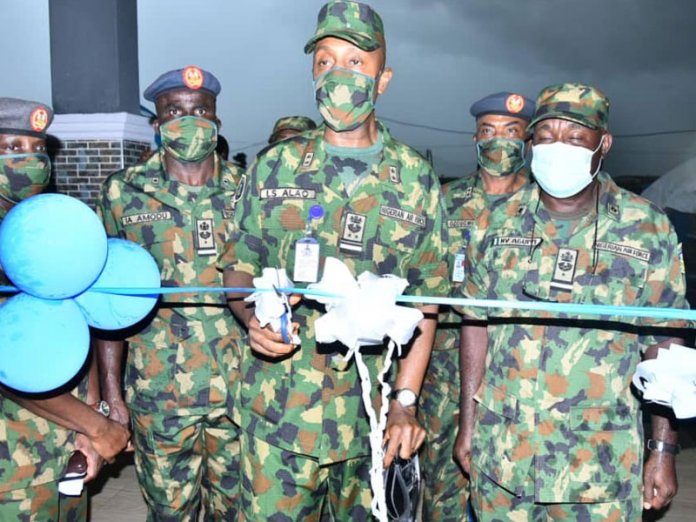 Chiemelie Ezeobi writes that in its quest for an efficient and effective force, the Nigerian Air Force recently boosted the welfare of its personnel in the Lagos command

For an efficient, effective and functional air force, welfare of personnel is critical and fundamental.

Mindful of the key role of boosting the welfare of his men, the Chief of the Air Staff (CAS) Air Marshal Sadique Abubakar, upon on assumption of office wasted no time in carving out a vision to support his quest, “to reposition the NAF into a highly professional and disciplined force through capacity building initiatives for effective, efficient and timely employment of air power in response to Nigeria’s national security imperatives”.

The vision was anchored on six key drivers and

in his quest to have a professional force, the CAS had taken steps to emplace the right structure, right human capacity, right equipment holding and, more importantly, the right welfare incentives to ensure personnel are properly motivated for effective service delivery.

He said, in his view, the human being is the most critical factor in any working system. Accordingly, the current NAF leadership had focused its attention on the provision of befitting accommodation as well as provision of good healthcare and educational facilities for personnel and their families.

The above statement made during one of his visits to Lagos was exactly what played out again at the Logistics Command of the Nigerian Air Force (NAF) last week when the CAS inaugurated accommodations for officers and men serving at the 041 Communication Depot, Shasha and 055 NAF LEGICO Camp, Onikan to motivate them for greater efficiency. He also unveiled the refurbished tailoring factory at LEGICO barracks, a multipurpose hall at the NAF Secondary School in Shasha, as well as a golf course in Shasha too.

While six-blocks of three bedroom flats each was built to provide decent housing for married officers and their families in the barracks at Shasha, a block of 24-well furnished studio apartments was erected at LEGICO to serve as transit accommodation for Airmen and Air Women.

Unveiling these projects, Abubakar, who was represented by the Air Officer Commanding (AOC), Logistics Command, Air Vice Marshal Lawal Alao, said completing the projects was testimony of the pledge he made on assumption of office in July 2015.

He said: “Then, I resolved to make priority the welfare needs of NAF personnel being a major requirement in the development of human capacity for enhance operation performance. While the service is being restructured for efficient service delivery in the last five years; there has also been series of infrastructure development aimed at improving both the working and living conditions of our personnel.

“This infrastructure development range from construction of new office of all the NAF base across the country. So that it can gear the NAF personnel in a conducive atmosphere and their families live in befitting environment.

“You have a responsibility to ensure adequate and sustained maintenance of the infrastructure in all our bases. As a service, we must also strive to continuously meet and even exceed expectations of the nation at this time of heightened insecurity by protecting the citizenry and our critical assets as well as bringing succour to the despaired in the discharge of our constitutional responsibility to the nation.”

He, however, advised the beneficiaries to make use of the facilities with utmost responsibility and maintenance culture.

Earlier, the Commander 041 Communication Depot, Shasha, Air Commodore Nkem Aguiyi said there has been unprecedented infrastructural development in NAF establishments since the present leadership came in.

He said: “There has been phenomenal improvement in operational capacity along with corresponding emplacement of necessary support section like many other units as well as bases across the country. Shasha base has benefited immensely from different projects and improving the welfare and sustaining the high moral of the NAF to effectively respond to national security imperative.”

Similarly, Commander 055 NAF Camp, Wing Commander Abubakar Yahaya praised the CAS for reviving the tailoring factory which will boost the production of uniforms for Airmen and Airwoman, adding that the newly built 24 by one transit studio accommodation would definitely improve the welfare and raise morale of the unit’s personnel for enhanced and effective performance.

He said: “CAS’ initiative and desire is making both Airmen and Airwomen of the Nigerian Air Force self reliant in the production of uniforms for the personnel. The unit has revamped and furnished its existing tailoring workshop with new sewing and modern embroidery machines.”