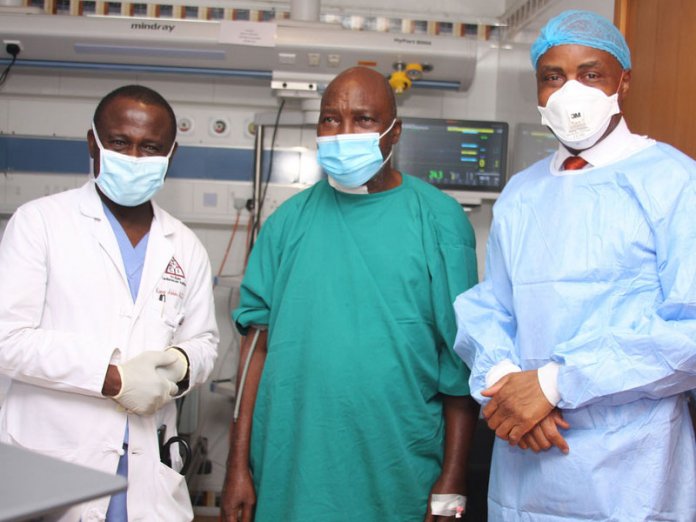 Open-Heart surgery is now cheaper in Nigeria than in foreign countries, surgeons that successfully performed the recent complex medical procedure on Mr. Oluwatoyin Adebiyi at the Reddington Hospital, Lagos, have said.

The surgeons, who spoke wednesday on Arise News Channel, the broadcast arm of THISDAY Newspapers, said the cost is much lower than in hospitals in India, the United Kingdom and the United States, where many Nigerians currently travel to in search of better healthcare services.

Although the doctors said Adebiyi’s heart surgery was not the first successful heart surgery in Nigeria, they explained that his case was the first complex heart surgery ever in Nigeria because of the nature of the full blockage in his heart, coupled with the leakage of a major valve in his heart system that led to his kidney failure twice, during the process of the surgery.

The trio from Reddington Hospital, Prof. Kamar Adeleke, Dr. Olutunde Lalude and Dr. Michael Sanusi, who led the procedure, said heart disease patients who hurriedly travel to India and other countries for surgery, could actually get the same result in Nigeria at a relatively lower cost, when compared to additional travelling and accommodation costs outside of Nigeria.

According to Lalude, who is the Group Managing Director of the hospital, the cost of heart surgery remained highly expensive because of the sophisticated medical equipment and infrastructure that is needed.

“There are times when you will need up to 19 specialists to carry out heart surgery on a single patient and each of them needs sophisticated machines to achieve a result, and the patient needs to be put in intensive care before and after the operation and all these are quite expensive in relation to cost.

“But cost varies from country to country. In the United States, for instance, a successful heart surgery can cost between $70,000 and $100,000. In India, the cost is less than $70,000, but in Nigeria, specifically at Reddington Hospital, we have been able to achieve successful surgery at a cost far less than what is obtainable in India,” Laude said.

According to his colleague, Adeleke, the same procedure costs $10,000 at Reddington.

He, however, explained that Nigeria needed an insurance-based approach for the payment of hospital bills as against the out-of-pocket expenditures incurred by the patient, adding that healthcare is expensive everywhere.

Adeleke, who is a heart surgeon, said he had to work with other doctors to begin open heart surgery in Nigeria as soon as he returned from the United States.

According to him, “To get the cost right, we did the comparative cost of the totality of what Nigerians spend on heart surgery in India, including the cost of air transportation and accommodation and we decided to charge $10,000 per surgery and since then, we have maintained that cost, which is far cheaper than what is obtainable in the UK, US, and India.

“Our cost could even be reduced further, but we do not produce any of the medical equipment in Nigeria. We have to import everything under the foreign exchange policy, including valves and each valve cost $2,500, as at the time we commenced open heart surgery in Nigeria, but today the cost of one valve has dropped to about $1,500, because we buy more of the valves now, based on the fact that more Nigerians are beginning to have their heart surgeries done in Nigeria.

“A good insurance scheme will help to further reduce the cost of open-heart surgery in Nigeria.”

Speaking on heart-related diseases among Nigerians, Sanusi, who is also a heart surgeon, said the common heart disease in Nigeria is the congenital heart disease, which is about 0.1 per cent of the total population.

He added that this is a situation where one out of every 1,000 children has a hole in the heart, which could later lead to heart blockage as the child grows old, if not detected early enough.

Sanusi, therefore, called for collaboration between the public and the private sectors.

He equally called for a significant investment in the healthcare delivery system by the government.